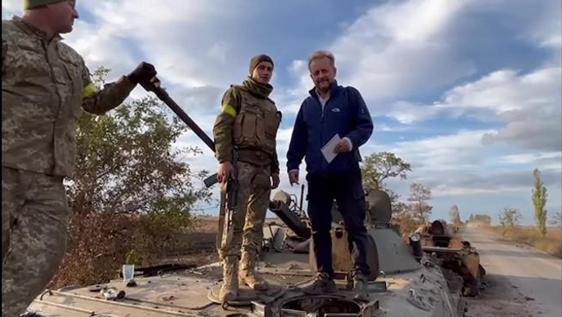 “We will reach the Black Sea,” said a video report from Dudchane, behind the front line advancing toward Kherson, Ukrainian soldiers explain, “but we need other weapons.”

We take advantage of that classic moment of the ultimate confusion of battle, when the front lines are mixed and no one knows where friends and foes are, to follow the advance of the Ukrainian forces.

Where are the Russians? We constantly ask the rare patrols that patrol the main road along the great river that divides Ukraine in two.

Soldiers open their arms, signal that we can continue, and someone warns us to be careful. They warn that “there are still Russians who are stranded and may try to attack you to get in civilian clothes and get away in the car”, but they are distracted and have other orders than to worry about foreign journalists.

The Dnipro River flows blue and calm to mark the cultivated fields just disturbed by the rare rows of trees on our left. Nature follows its course, the water does not stop: but here, on the land contested among men, it is a bad hard war, with Bodies scattered in the streets, hidden among the yellow grass and mines everywhere; With dirty trenches of food and uniforms left soaked in blood; With asphalt deeply marked by tank tracks and still-hot black debris.

There is no need to bother Tolstoy or Stendhal to stress how general those who stand in the middle of the shots and run away in fear, shrapnel of grenades a few meters away, hardly have a cold mind to comprehend what is really going on around. But yesterday, the confusion of the battle allowed us to reach the farming outskirts of a village Dudchany. Here until last night the Ukrainian vanguard had settled after an advance of about 35 kilometers. However, the Ukrainian army did not organize checkpoints and checkpoints. The few civilians left home were broken into.

Special forces, front-line soldiers, moving in the field: They let us pass by making a “v” of victory and grins if we tried to photograph them.

If it was up to them, we could even catch up with the Russians on the other side of the clouds of black smoke, it didn’t matter to them. But soon the military police will arrive and then everything will be different, as is already happening in the newly reopened areas of the Donbass, where escorts and permits for the press are now needed.

But let’s go in order. We came to the Kherson sector because the new Ukrainian counter-offensive began here last Sunday, which opened a new hot front and a second crisis for the Russian leaders. Putin said nicely that these are “only temporary achievements”: What we are facing is the realistic denial of the farce in the occupied territories and its incorporation into the “Mother Russia” of declarations and celebrations. Moscow annexes Kherson on paper, but in reality is losing itHour after hour, kilometer after kilometer.

We could get to Mykolaiv from Odessa, in the west of Kherson, where yesterday the local governor, Vitaly Kim, said that the Russians are clearly withdrawing and have completely abandoned the city of Snyurivka. But The backbone of the Ukrainian offensive is here, along the Dniprothe area that serves as a joint between the area of ​​the large nuclear power plant Zaporizhzhia and the area that descends to the bridges connecting the capital of Kherson with the roads to the Crimea and Donbass to the east.

The goal is clear: about 30,000 Russian soldiers are at risk of being entrapped by Kherson. The signs of their siege are now visible. Yesterday, a Ukrainian missile hit a hotel where the headquarters of at least 200 officers were located, seven of whom were killed. Kirill Strimosov, the now known Moscow collaborator who rules the city, yesterday denied that Ukrainians “can set foot in Kherson”. But the reality of the battlefield speaks a different language. “We will march to the Black Sea,” shouted a smiling officer from the turret of his tank.Bags of food and blankets hanging from it. In the past two months, their artillery has destroyed bridges and made the movement of barges nearly impossible.

If the Ukrainian advance reaches the sea, for the Russians it is a defeat.

We passed the Mariinsky village about two in the afternoon here from the end of March until five days ago, the old line of fire went off. We see some houses being bombed and checkpoints collapsing, but the damage is generally limited, as if the Ukrainian attack had been very rapid, without giving the Russians time to respond.

The first cars are burnt out and the wreckage on the road reaches another five or six kilometers, coinciding with the villages of Zolota Balta and Mikhalevka: fields are marked by tanks and mounds of loose dirt, which mark the paths of trenches. Many trees were shattered and explosive craters could be seen everywhere. After passing some burning vehicles marked with a Russian “Z”, surrounded by the wreckage of overturned Ukrainian jeeps, the scene becomes raw. At least six bodies of Russian soldiers lie on the ground.

The explosions made the faces almost unrecognizable, and the splinters devoured the couple. Some Ukrainian patrols have captured their bunkers a hundred meters away, and are clearing them to organize their temporary camps. They don’t care about the dead. After only a few minutes we will notice that there are others half-hiding in the grass. “Their fugitive comrades were in such a hurry that they couldn’t take them.. Our health units will take care of their burial in the next few days.” “I don’t think about these dead people. We want to live and ask Europe to send us more weapons. We need him to beat the Russians“Says Max, a 23-year-old infantryman.

READ  What does the peace plan between Russia and Ukraine that Erdogan will propose to Putin include?

Another, Dmitriy, explains in a calm voice that he “feels absolutely nothing for these dead people.” Then he thinks about it. “They should serve as a warning to all the new recruits that Putin would like to send to fight. They must know that this is the end awaiting them. We have killed fellow more experienced veterans. The Russians are fleeing from here, they are unable to regroup. Coming here now in Russian dress means that you are doomed to commit suicide. ”

We continue towards the advanced lines. Every hundred meters there is a mostly Russian wrecked vehicle. Arriving at the crossroads of Novoaleksandrivka, we find Russian positions full of ammunition and food. Clothes are hung on the back to dry. At the entrance to a small dugout fortified with a colossal timber-studded ceiling, its occupants prepared a pile of wood for the stove. On the floor there are still military uniforms, military boots and rubles with Russian Sim cards. Then the artillery will become more intense, right on the outskirts of Dudchane. A soldier explained that they were now widening the advance corridor so that they would not be attacked from the southern flank. The orders show that they captured dozens of other villages, among them: Lyubimivka, Khishnevka, Zolota Balka, Belyaevka, Ukrainka, Valkia, Mala Oleksandrivka. Ukrainians are recycling Russian materials to establish themselves. We see them take the giant Uragan missile truck that has just been captured. They don’t seem ready to retire at all: they’re here to stay.

“The Italian Lynx has been destroyed in Ukraine. Taxpayers, are you happy now? But the armored car is Tekne from Kyiv