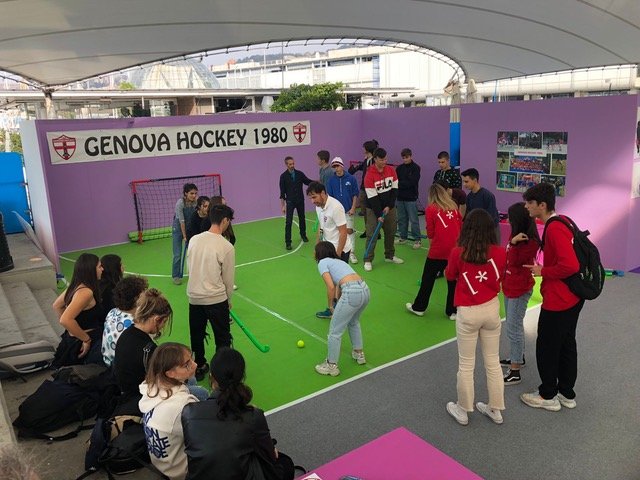 Oh yeah: We did this too! bring ushockeyand for the first time in Italy, at one of the main events of scientific culture, an international reference point.

Scientists, researchers, promoters, artists, and authors, as well as scientific bodies, associations, and companies, meet with the public to ensure that science can be touched, seen, and understood without limits, in an open and free-of-academic approach.

And in the morning, the schools: a cheerful and restless, but interested and interesting army of students of all ages, since this morning they have tried and will try their hand at the “secrets” of hockey sticks.

“Secret Staff!” It is in fact the title chosen for the workshop, presented to schools and youth, that will accompany the event from the first day to the last day.

explain Roberta de Barbieridirector in red and white:Genova Hockey 1980 is a very active ASD and is always looking for new stimuli to give to our children, but also to those who have never played our sport, field hockey. So this year we decided to address young people in a new way, take on a new challenge, and present one of our workshops at the Science Festival that will take place in the city from today, October 20, until November 1. The workshop, aimed at children between the ages of 8 and 13, shows what materials hockey sticks (and many other sports equipment) are made of, and how these materials have evolved over time: from wood to carbon fibres. It will also provide material for thought about non-verbal communication on the pitch between teammates, in line with this year’s festival motto of ‘Languages’, through fun games played with stick and ball.”

An alternative way, you have never tried it before, to hockey!

The Science Festival 2022 It takes place in Genoa from October 20 to November 1, in Piazza delle Fest, in Porto Antico. Daily, from 9 to 16 (weekdays) and from 10 to 19 (holidays and days before holidays).