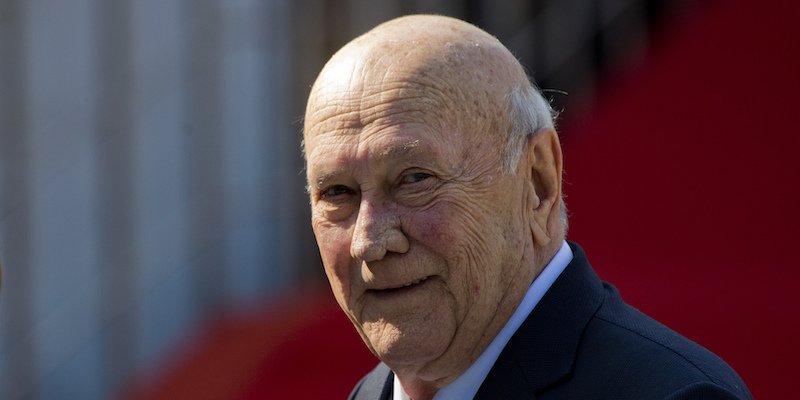 Frederic Willem de Klerk, the last white president of South Africa, has died at the age of 85. Having been an active supporter and enforcer of the racist and racist practices of the South African regime, during his presidency years 1989-1994, de Klerk adopted more open policies towards the black majority and led South Africa towards the end of apartheid and towards democracy. In 1990, after 27 years in prison, it was announced that Nelson Mandela was released. He and Mandela were awarded the Nobel Peace Prize in 1993, for their efforts to end apartheid and to seek a democratic transition.

De Klerk was born in Johannesburg, the capital, in 1936. He came from a family of white politicians, closely related to the South African National Party, who adopted and then supported most of the apartheid policies that created the apartheid regime. De Klerk also grew up in that environment. He studied law at a Christian university in South Africa and was elected MP for the National Party in 1972, becoming minister in 1978 and leader of the party in 1989, the year he also became president.

De Klerk was convinced at a certain point in his political life, which was built up through a defense of the apartheid regime, that it was appropriate to dialogue with the black majority, rather than continue to keep it separate: also as a result of increasing pressure from democratic states and the international community compared to an unacceptable construction But it’s still solid in the 80’s. For this reason, judgment on his options often differs from that based on his reasons: “He didn’t say apartheid was bad or immoral, but decided it could no longer work,” said a US diplomat responsible for tracking the end-of-order developments. Among de Klerk’s most famous speeches were those he gave in the South African Parliament on February 2, 1990, in which he reported the decision to release Mandela, who had been arrested in August 1962 on charges of sabotage and plotting a revolution against the government. . Two years earlier, the National Party government had dissolved and banned the African National Congress (ANC), Mandela’s party.

In his speech, de Klerk announced a radical change in relations between whites and blacks, which should have given shape to the “new South Africa”. Various factors motivated him: some were also related to his personal beliefs – his Christian faith was mainly influenced by him – and others were based instead on external factors: massive popular protests against apartheid to which international pressure on the government to abolish it was added.

After Mandela was released along with other political prisoners on February 11, 1990, de Klerk re-legitimized both his party and other political organizations that had previously been illegal. In 1991, he and Mandela created the Agreement for a Democratic South Africa (CODESA) with the goal of creating a new government elected by all citizens, and in 1992 he called a referendum among whites in South Africa: two-thirds agreed to the end of apartheid, which was subsequently implemented.

In 1993, Mandela and de Klerk were jointly awarded the Nobel Peace Prize.
However, the relationship between the two became more complex in the following years. Mandela always called him the “enemy” with whom he made a peace agreement.

After decades of apartheid, the Mandela and de Klerk parties found themselves political opponents. Mandela de Klerk was repeatedly accused of leading an illegitimate minority regime, while de Klerk argued that Mandela and his party could not be dealt with extremists.

In 1994, the first free and universal elections were held in South Africa, in which both a new parliament and a new president of the republic were elected. Part of de Klerk’s election campaign was based on exploiting his voters’ concerns about the inexperience of Mandela’s party: however, the latter won with more than 60 percent of the vote, while de Klerk’s party stopped at 20 percent.

READ  Ukraine, today is the day of new EU sanctions

Mandela was elected president of the republic and formed a coalition government with de Klerk, who instead served as vice president (in South Africa, the president has executive power). They ruled together for two years, with great disagreements, until in 1996, de Klerk left the alliance with his party, becoming the leader of the opposition.

Resigning his party the following year, he never stopped criticizing successive South African governments, which according to him do not respect the rule of law and democratic principles. For their part, many black politicians argued that de Klerk’s party had never taken responsibility for the apartheid system that it had established and supported for decades.

In August 1996, de Klerk publicly apologized to the South African Truth and Reconciliation Commission, established in 1995 to rebuild the most serious crimes committed during apartheid, for the “pain and suffering” that that regime had caused.