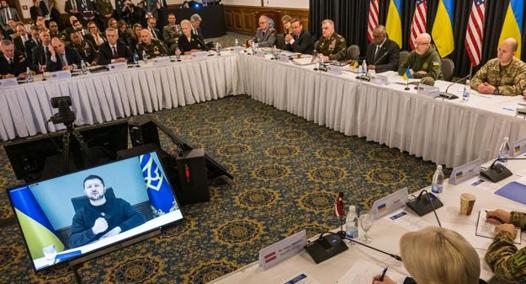 to Andrea Nicastro, sent to Lviv, and Redisione Online

War Bulletin on Saturday, January 21, live. New German Defense Minister Boris Pistorius disappoints the public: “We must assess the possible consequences for everyone. We also have to make an inventory of available resources »

• The war in Ukraine has reached its 332nd day.
• Zelensky at the Ramstein Summit: “We need help ASAP.” the Minister Crocito: “Ukraine is very happy with the help that our country can provide, but the details will be classified”
• Wagner, the United States confirms: «There are 50 thousand pro-Russian mercenaries in Ukraine».
• Monsignor Gallagher: “The Pope will not go to Kyiv now”
• Ten points to monitor the progress of the war.

“On February 24 we will be in front of the Russian Embassy to say no to war, no to the invasion of Ukraine”: announced Enrico Letta at the National Assembly of the Democratic Party, currently underway in Rome.

In a tweet, Latvian Foreign Minister Edgar Renkovice made an appeal to Berlin, asking – along with colleagues from Lithuania and Estonia – to supply Ukraine “now” Leopard tank. “This is necessary to stop Russian aggression, help Ukraine and quickly restore peace in Europe. Germany, as the main European power, bears a special responsibility in this regard.” The call by the ministers of the three Baltic countries comes a day after a military summit at Ramstein Air Base in Germany failed to secure a commitment from the German government to send tanks.

Deputy Foreign Minister and former ambassador to Germany Andrei Melnik called on German Defense Minister Boris Pistorius in a Twitter message to start supplying German-made Leopard 2 tanks to Ukraine. “What is there to check, Herr Pistorius? You deliver! It is a pity that the ruling coalition in Germany exposes itself in this way,” Melnik wrote. According to the deputy minister, the occupied Ukrainian regions can only be liberated from Russian occupation with heavy equipment. It is an open criticism of Germany’s decision By not allowing Leopard 2 tanks to be sent to Kyiv, Melnik told radio station Deutschlandfunk, “Why should the Leopard now represent crossing a red line?” Melnik hoped that Germany would “take a leading role” on the issue.

North Korea continues to supply Russian mercenaries to the Wagner Group Weapons and ammunition For use in the framework of the war in Ukraine. This was stated by the Coordinator of Strategic Communications at the US National Security Council, John Kirby, during a press briefing. “Because of international sanctions, Russia is increasingly turning to other countries for weapons and ammunition, including North Korea, whose officials have falsely denied the allegations,” he said. Kirby also showed some satellite images showing how on November 18, 2022, five train cars departed from Russia for North Korea, with several containers being loaded the next day. “The supplies delivered to the Wagner Group have not changed the dynamics of the conflict on the ground, but we are confident that Russia will continue to receive weapons from North Korea – a dynamic we strongly condemn,” he concluded.

According to American estimates, the number of Russian casualties may have reached 188,000 since the start of the invasion of Ukraine: this figure was revealed to The Sun on the occasion of the Rammstein summit in Germany. The newspaper attributed these figures to “defense sources” after US General Mark Milley said that Russia had suffered “a huge number of losses in excess of 100,000”. The number of casualties is believed to include Russian forces and Wagner’s mercenary group. Today the Kyiv army announced that the number of dead Russian soldiers reached 120,160, of which 860 were killed yesterday.

READ  Uncover the path of the coffin. William and Harry tonight in the wake of their grandchildren

During the past 24 hours, the Russian armed forces launched 27 attacks on the Sumy region. Local governor Dmitry Zhivitsky wrote about this in Telegram. Ukraine Pravda reports. Belopolskaya and Ismansky localities were affected. There were no injuries or damages.

08:28 – A woman dies in Kyiv from a Russian grenade on a house in Kharkiv

In the city of Vovchansk, in the eastern Kharkiv region, a woman was killed after a grenade thrown by Russian forces hit her home. Said the head of the regional military department Oleg Synigubov. “The enemy continues to terrorize the civilian population of the Kharkiv region in the border settlements of the Kobyan, Chuguyev and Kharkiv districts. Yesterday, the occupiers bombarded the cities of Vovchansk, Kupyansk, Strelitsa, Vilcha, Ogertseve and other settlements with artillery, tanks and mortars.

07:30 – Crocito: “This is what Ukraine asks of us and what Italy will provide”

Defense Minister Guido Crocito Interview in Ramstein, Germany, by our correspondent Giuseppe Sarsina, explaining what Ukraine’s requests are in terms of weapons: “Kyiv continues to claim the possibility of defending itself against a Russian counteroffensive that could begin in early spring. Moscow is preparing to resume its ground offensive and Ukraine must be ready to defend itself. It calls for air and missile defense systems and ground systems. Today, the countries that help them have come together to understand what they can do.” The minister added that “Italy” will send more aid upon the ratification of the sixth decree, but the details will be confidential.

On the supply of Leopard 2s, Rolls Royces tanks to Ukraine, Germany does not want to decide under pressure. This is the latest message to come from the Ramstein summit, where Germany’s new defense minister, Boris Pistorius, announced an internal and external scrutiny of all the pros and cons of a possible decision, Paolo Valentino explains in this study.

READ  Switzerland, a man changes his gender to retire early

There is no decision on sending German-made Leopold 2 tanks to Ukraine. All eyes were on the top US and allied defense chiefs at Ramstein Air Base in Germany, who were indecisive about the tanks. Pentagon chief Lloyd Austin played down hopes of a breakthrough: “I don’t have any announcements to make about Abrams and I’ve heard the German defense minister, who said they haven’t made up their minds about the Panthers,” the Pentagon chief said at a news conference at the end of the summit.

However, the United States has formalized the announcement of a new $2.5 billion aid package, which for the first time will include Stryker armored vehicles and Bradley fighting vehicles. An important help given the situation on the ground. NATO Secretary General Jens Stoltenberg said: “Russia is preparing for new attacks, so it is necessary to increase support so that Ukraine can win and regain the occupied territories.”

The Rammstein meeting, which Defense Minister Guido Crossetto attended on behalf of Italy, opened with a sincere appeal from Volodymyr Zelensky, who spoke from a distance. “I can thank you a hundred times and it would be absolutely correct and fair, given everything we have already done, but hundreds of thanks are not hundreds of tanks,” said the Ukrainian president, asking to “act quickly” to send the tanks.