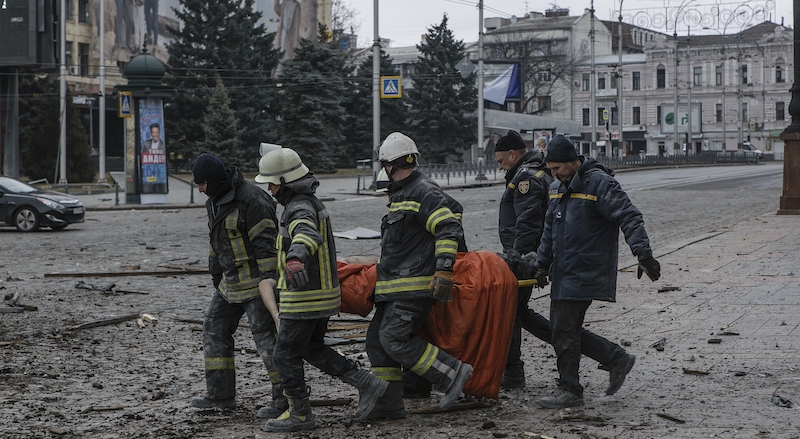 In the past two days, Russian military operations in Ukraine have become more extensive and destructive: at any moment in the capital, Kyiv, a massive ground offensive is expected that will try to encircle the city from the west, isolate it and cut off all refueling routes. . In Kharkiv the population was under practically uninterrupted artillery fire for two days. In the south of the country, the Russian army said it had captured Kherson and was trying to encircle the strategic port of Mariupol on the Sea of ​​Azov, which has been under constant bombardment since Tuesday evening.

All major Ukrainian cities are under violent and indiscriminate attacks. A television tower, a well-known Holocaust memorial and maternity clinic in Kyiv, as well as dozens of other civilian buildings were also hit. Rockets fell in Kharkiv on the central Freedom Square, and similar cases occur practically everywhere, even in small cities. Unfortunately, this change in the pace of Russian military strategy was widely expected. Many analysts have made clear, in recent days, that the Russian military does not expect to meet much resistance in Ukraine, and that it will respond by increasing the level of violence, including on cities and even against civilian targets.

On February 26, just two days after the start of the Russian invasion of Ukraine, on the website of the Russian News Agency RIA Novosti An article has been published Where the victory of the Russian army was celebrated in the country“Ukraine has returned to Russia,” the statement read. It is clear that the situation on the ground was and remains the opposite: the Ukrainian government has not fallen, and the army is working very effectively to slow the progress of Russian forces on several fronts.

According to some Russian media experts, the article is by RIA Novosti It was almost certainly published in error, and it well represents the expectations the Russian establishment had about an invasion of Ukraine: a military intervention that would have ended in a few days and with few casualties.

READ  Who will be the next Prime Minister - Libero Quotidiano

– Read also: Is the invasion going worse than Putin expected?

This strategy was clearly wrong and there was a lot of discussion these days about the mistakes Russia made. First of all, there is a general disregard for the resistance and the regular army in Ukraine – which may well have been done by Putin himself, who in recent days has repeatedly said that he does not consider it a real state – and an overestimate it. Troops: the Russians “are not as strong as they thought”, He said to Reuters David Deptula, retired American general. There was also talk of problems with logisticsin the collection of information by intelligence Born in morale is very low of the Russian forces.

However, the bombing with heavy artillery and fighter bombers from the Air Force was one of the most cited issues. Virtually every offensive operation in military history from World War II until today has been anticipated and accompanied by heavy bombing to destroy enemy forces and infrastructure without incurring major losses and attempting to gain air supremacy. All the great conquests of the twentieth century had their starting point with bombing and heavy artillery.

Moreover, Russia has made this type of bombing one of the pillars of its military strategy: how to remember L ‘Economist , In December 1994, during the Chechen war, Russian forces bombed the capital Grozny with 4,000 rockets and grenades. courier. For comparison, 3,500 missiles fell on Sarajevo during the worst bombing of the Bosnian war in a day. Even during the Syrian campaign, the Russian bombing was fierce: in May 2019, within 12 hours, Russian forces destroyed four civilian hospitals in the Aleppo region alone.

In the early days of the war in Ukraine, these massive bombings were not seen, even if they were widely expected by many military analysts. It is not clear why the Russian military initially decided not to bomb, but several hypotheses are circulating: trying to limit civilian destruction and casualties, underestimating Ukrainian capabilities, or trying to prevent world public opinion from being shaken by testimonies of major bombings on a European country. However, the view has always been a blitzkrieg that ends within 48 hours.

This strategy has failed blatantly, and things are already beginning to change.

The most notable change is the massive increase in the bombing of cities, which is beginning to remind us more and more of a conventional military operation. The Russian military continues to claim that it targets exclusively military targets (deliberate targeting of civilian targets would be a war crime), but the situation on the ground shows that between the two and today, hundreds of civilian buildings and infrastructure have been targeted in different cities. In Ukraine, with heavy damage and casualties.

Many military experts also have pointed out That the weapons with which these explosions are carried out have changed: if in the early days the Russian strategy mainly included the use of high-precision missiles, aimed at destroying exclusively military positions, then the massive use of artillery and bombs became less. Micro clusters that strike randomly, as we are witnessing these days.

This bombing violence could further escalate, especially if Russia decides to start using urban fighter bombers, such as Su 34which has hitherto been seldom used, and has practically never been used for bombing missions.

A car is destroyed after a Russian bombing in central Kharkiv on March 1. (AP Photo/Pavel Dorogoy)

Another novelty that we are seeing in the field, even if it is still being assessed and verified in some respects, has to do with the progress of ground operations. It seemed at least at first that the Russian strategy was to occupy quickly the major city centers, especially the center of Kyiv, and advance as quickly as possible and neglect all the surrounding areas.

READ  Bassem Aurora, the Armenian heroine. The other "Nobel" from the President of Moderna- Corriere.it

This strategy did not work: the cities resisted the first attacks and there were already decisive counterattacks. This highlighted the shortcomings of Russian military logistics, deployed in anticipation of a very rapid conflict: the more advanced units that should have conquered Kyiv and other cities, having failed, found themselves without the support of the rest of the army. .

The strategy of lightning fast conquest of a few city centers has changed in recent days in favor of a more traditional strategy of systematic conquest of territory by country. This is well shown in Kharkiv, where Russian forces are trying to conquer cities around the city one by one, to avoid threats to their supply lines and above all to try to encircle the city. The same could happen in Kyiv, where for days the Russians had been massing chariots and men north of the city, perhaps in anticipation of a major operation.

All these adjustments to Russian strategy predict a significant increase in the level of violence, and almost inevitably an increase in civilian deaths and injuries. According to the Ukrainian authorities, there are already more than two thousand people, even if it is difficult to confirm the number. as written byeconomicIt is increasingly plausible that the war will enter a more dangerous phase in the coming days.