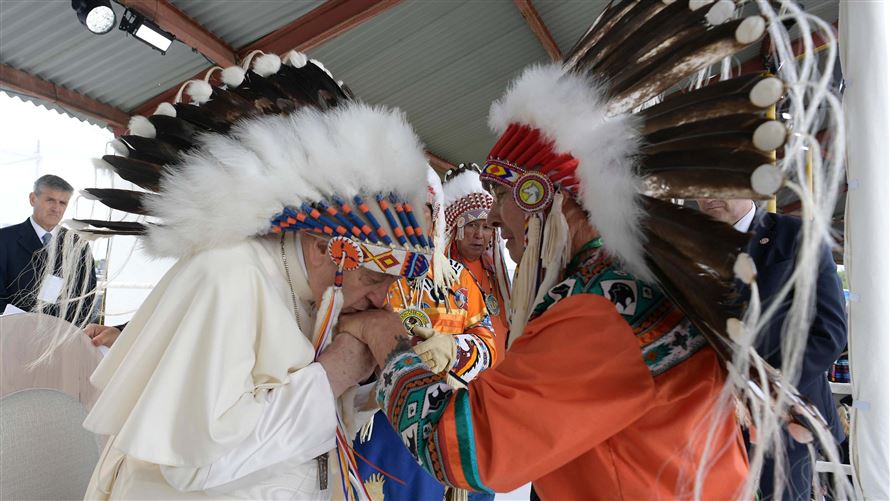 There are moments when it becomes clear that history, marking our past and therefore our present, is out of our hands. We can see how power deals with problems: the next morning, the headlines were about the ongoing war in Ukraine and the news of four political executions in Myanmar. We see so much evil around us that we wonder if there is a way out, while at the same time we think that history is somehow structured by the power that often perpetrates these horrors. But if we want to understand what really makes history, we need to see that there is something truly new, and that often means looking at the peripheries between the oppressed and the marginalized.

In late March, when representatives of Canadian indigenous communities met with Pope Francis at the Vatican, Marie-Anne Day Walker-PelletierThe chief of the Okanaese First Nation in Saskatchewan presented to the Holy Father Two pairs of children’s moccasins, refers to the many children who enter Canadian residential schools and never return home. the oppressed. The agreement was that the Pope would return these moccasins when he came to Canada to apologize.

On July 25, Pope Francis began his mission “Penitential Pilgrimage”, as he called it, met about two thousand survivors of those institutions and others in Moscow Park. He apologized several times, noting that Christians had “supported the colonial mentality of the oppressors of the tribal people”. He apologized “with shame and plainness … for the evil that many Christians have done.” And he mentioned the moccasins, how they had brought back pain in him in the past months…

It is truly moving to witness what we can only describe as an encounter between residential school survivors and the Lord Pope. It’s not a meeting, but a meeting A meeting, with the full weight of this word. The Holy Father and the natives who had arrived there were overwhelmed by the new thing that had overtaken them unexpectedly. Many First Nations people, Inuit and Métis hoped the pontiff would pardon them, but weren’t sure that would happen. Others felt that an apology was not enough. The impressive thing is that almost all our hopes, expectations or demands were destroyed by the event. A woman Greece He spontaneously started singing the Canadian national anthem in that language Greece With tears on her cheeks. The Pope stood and applauded as she spoke.

The meeting at Muskwa Park was a very difficult moment. There is no applause that often accompanies papal visits. Pope Francis smiled sweetly as he greeted people on stage, but his face had a very serious expression. After all, it was a penance pilgrimage, so dignitaries and politicians respected the gesture. This is not a good time to take photos with the Pope or eagerly try to get a closer look at him, as is (understandably) often the case during papal visits. Rather, his approach invited all to join him in a sincere plea for forgiveness from the tribal people and God.

Also Read – “From the Source of Evil, Let Us Pray to the Lord of Good”

As we waited for the Holy Pope to come to Canada, it sometimes seemed that justice for Indigenous peoples was impossible and that hopes for reconciliation were very slim. And yet, in a field in the middle of Alberta, between a humble pope and thousands of equally humble, indigenous people who represented him on the sidelines, he apologized. A new hope is opened. We can comment as much as we like and form any theory on the path of church-tribal relations, but first, we must deal with what happened in those two short hours at Muskwa Park in Maskwazi. This extraordinary event confirmed the words of the Holy Father: “Our efforts to heal and reconcile are not enough, we need His grace”.

READ  Giovinko: "Insina? You live well in Canada, some trains only pass once"

Yes, he brought back those moccasins.