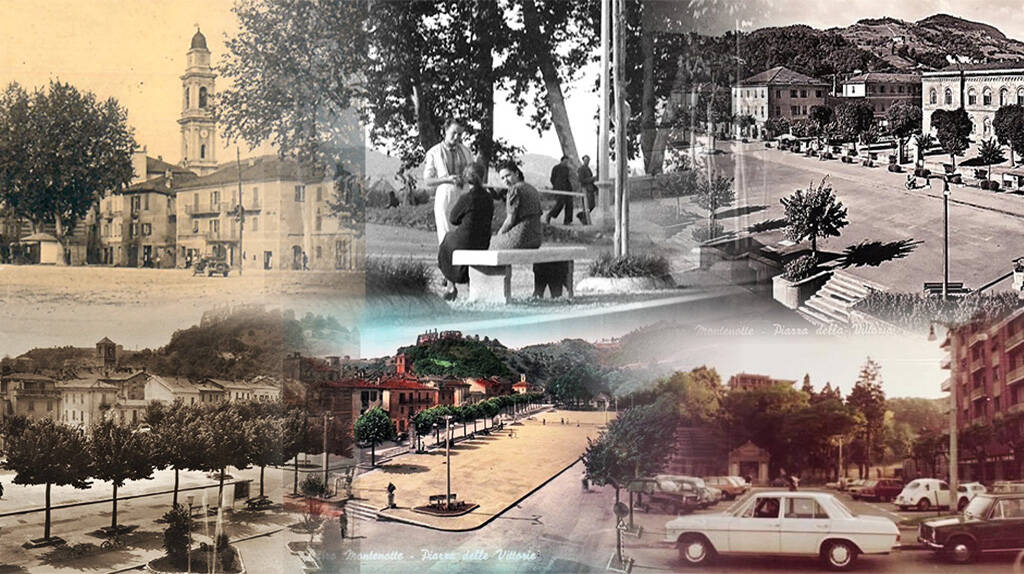 Cairo Mountnote. Today, Saturday, November 27, the inauguration of Piazza della Vittoria (Here is the program). a special day for the city of Cairo Montenotte, where after more than a year its beating hearts are back on beating. The people of Cairo have been waiting for him for a while and now they will finally regain their square, hub for the communityA place to meet, chat or stroll. As it has been for years, for more than a century.

In fact, the history of Piazza della Vittoria is long He was born at the end of the nineteenth centuryWithout real planning. But simply as a dividing place between the historical center and “New Cairo”. However, from a simple dirt field, it becomes a street, bounded by a tree-lined road, before it turns into a real square, At first he was named after Garibaldi.

The square in the fifties

Their faces have varied over time, but so have their uses. From the bus station to the parking lot, to the pedestrianized space as we know it today.

in a More than 120 years Piazza della Vittoria has come a long way, becoming a witness to friendships, love and encounters; Stage important events, performances and demonstrations. Place of manufacture which is the history of Cairo Montenotte.

It was the end of the nineteenth century and Giuseppe Cesar Aba The mayor of Cairo was Montenotte, a small town with a population of no more than 3 thousand people. him an idea tear down walls that took the country in its favour urban growth. The work is completed and his successors want to take another step forward to expand the city or bury Rio Tanarello And start construction of new buildings. Thus, the school building (today Palazzo di Città), the Montenotte Hotel, the Workers’ Assembly, the Villa Baccino and the other buildings that compose it “New CairoAll the buildings erected outside the Rio Tanarello, and buried in 1889. Thus a large empty space, unpaved at that time, was formed between the old walls and the new quarter. And this is where the Piazza della Vittoria will rise.

Initially, the area is bordered by a tree-lined road called Corso Garibaldi. A character with several connections to the city. Not only did many Cairo residents fight with him in Latin America, but he was also a friend of Giuseppe Cesar Abba with whom he shared some battles in the field. 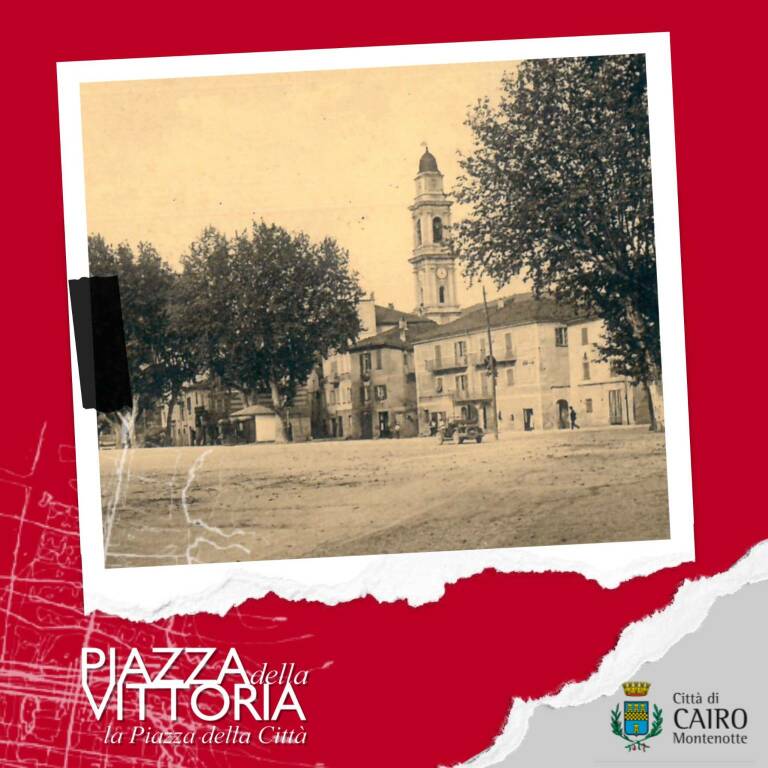 in a 1920 The War memorial Little by little this space begins to be used for celebration and as a real square. And in the thirties who changes his name and becomes Piazza della Vittoria, as evidenced by some postcards dating from 1937. 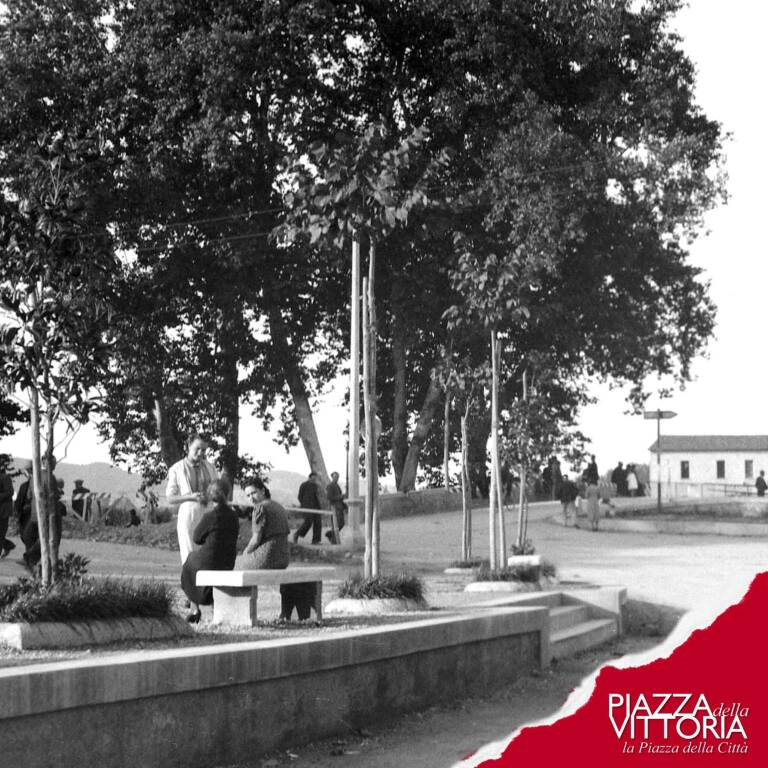 After the war, the cars arrive: Piazza delle Vittoria transforms into a bus stop and car park

The lives of Italians and the people of Cairo are changing and improving. In many homes, appliances arrive and the streets begin to fill up cars. The development of the sector is impressive: in Italy, the number of cars in circulation increased, between the 1950s and 1960s, from just over 425,000 to 2.45 million. As well as in Cairo Montenotte change is evident. In fact, the square becomes a The parking area, Beside End From buses, or rather Courier service. 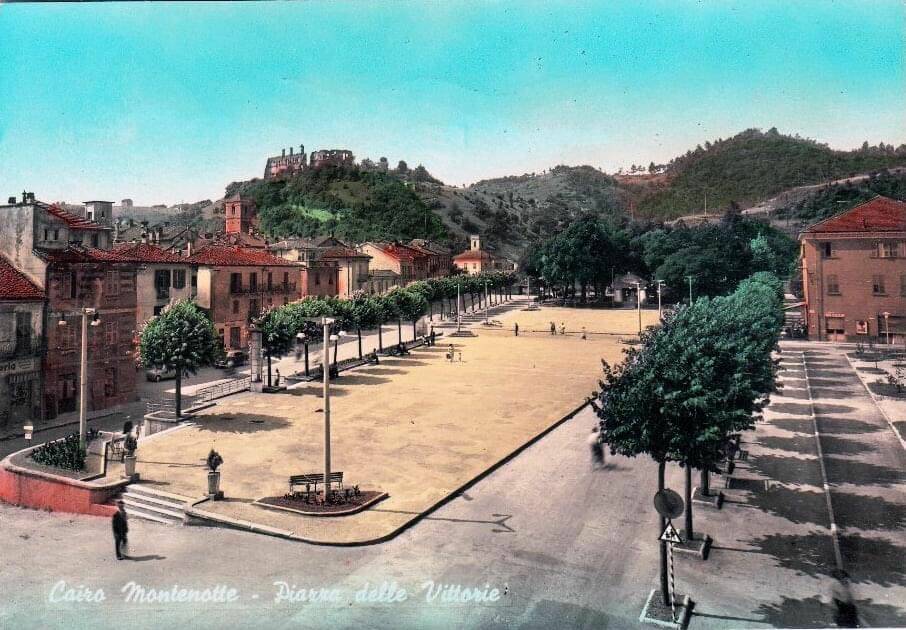 The square in the fifties

There are two stations in Piazza della Vittoria: on the riverside of El Porro, and on the monumental side of the Saba (Società Autolinee Briano and Astengo). So the square also becomes a The nerve center of city traffic, as well as the location of the assembly and memory. 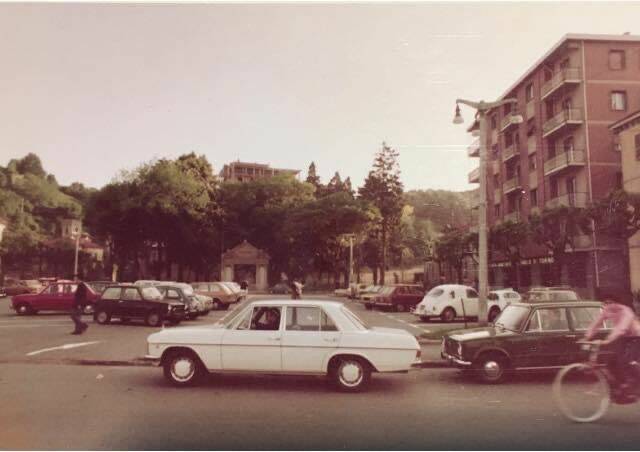 However, over the years, the space for cars has shrunk. In the 1970s the area near the gardens was used only as a parking lot, while in the 1980s parking was only allowed in Corso Garibaldi, the area in front of the historic Da Germone restaurant, Casa del Libro and Bar Vittoria.

but it’s inearly 2000s The cars would disappear from the arena. over there renewal Decided by the mayor Osvaldo Spillo, in fact, it provides for the creation of a file underground parking Thus Piazza delle Vittoria became an exclusive area pedestrian, for the full enjoyment of the population. 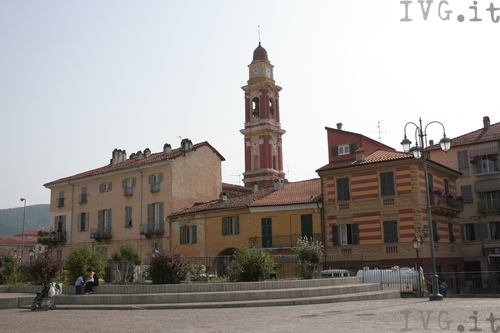 Piazza della Vittoria: the heart and soul of the city

A history spanning more than a century, that of Piazza della Vittoria which, despite various transformations, has never changed its essence. From its inception until today, it represents city ​​spirit, along with what was initially called Via Maestra or Via Rome.

Here the people of Cairo used to gather, play, joke and spend their lives Youth. Each generation has its own encounter pointsFrom the long wall in front of the Book House to the steps of the stairs on either side of the square. It has become a place to meet and share, imprinting indelible memories in the minds of all those who spent their lives or only part of their lives in Cairo. 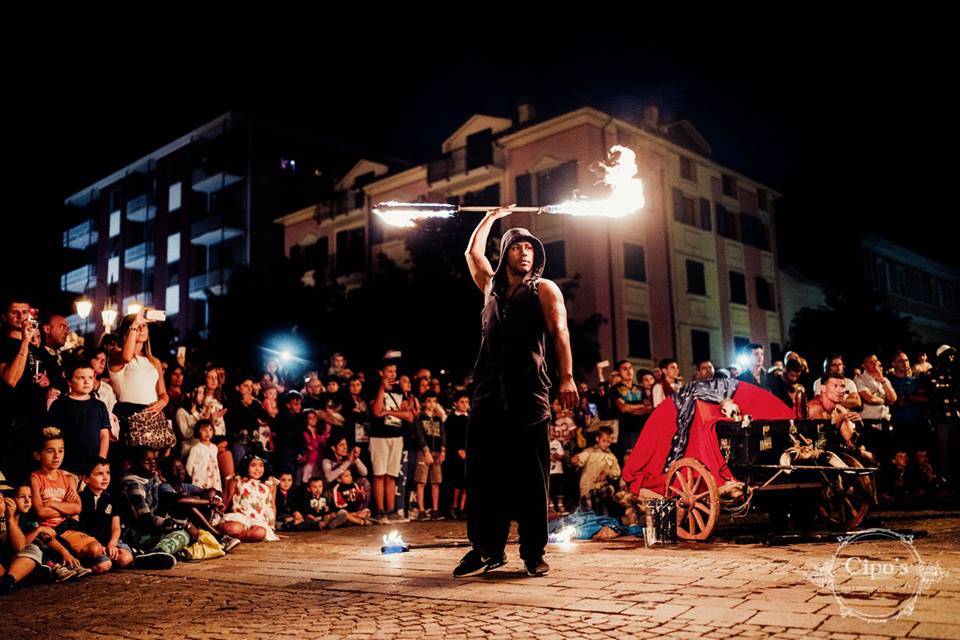 But not only that, for years Piazza della Vittoria was also one of the important centers in trade Citizen, host every Thursday weekly market, but also Exhibitions NS markets. I’m different too tapeToday, some of them have been closed down and replaced with other activities, real meeting points for Cairo nightlife.

In addition to clubs, many are active in the field Demonstrations Sports, religious, institutional has been organized over the years. From the provincial palaces, to carnivals, to international football tournament evenings, to festivals, even Guard Officers Section, now cadets of the prison police. For decades, thanks to General Abria, Piazza della Vittoria was the scene of this truly remarkable and impressive event which brought thousands of clients from all over Italy to the city (there were about 800 courses the following year) with their families, including everyone in the community . 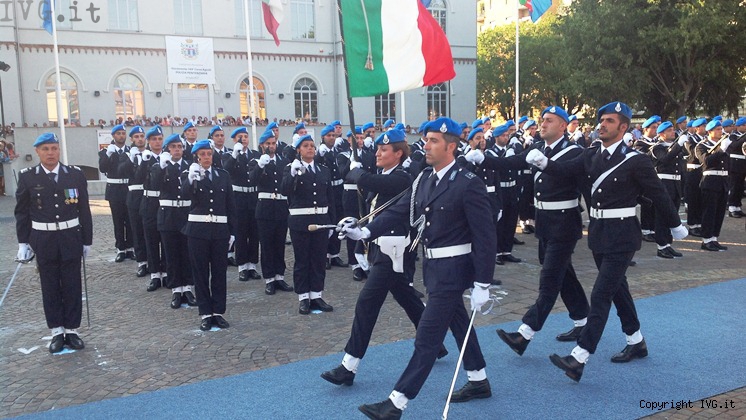 The stage for parties and corporate events but also A place for memory Thanks to the presence of the War Memorial, the centerpiece of the festivities and the memory of those people from Cairns who fought for Tricolore. 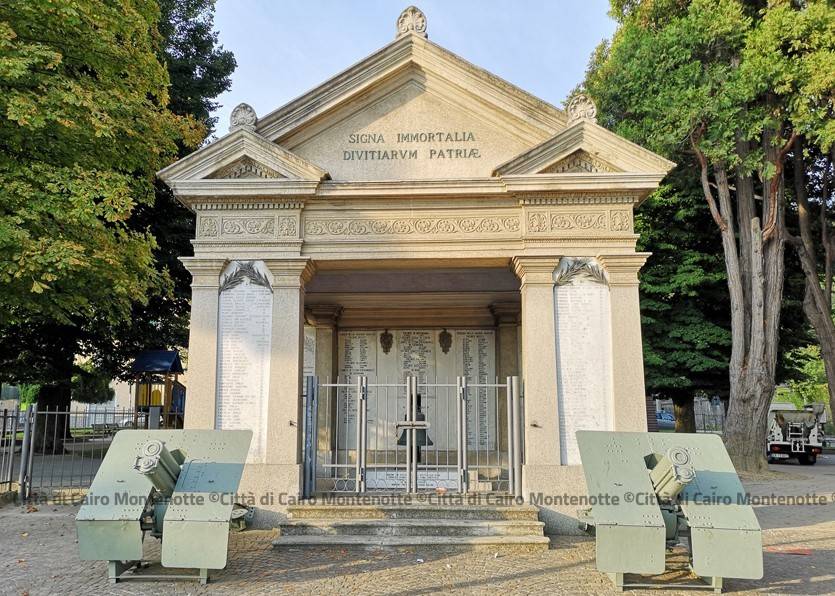 Art and postcards: Victory Square, a symbol of Cairo

Imposing, broad, scenographic. Perfect theme for artwork. So many representations of Piazza della Vittoria that many artists, especially local artists, have decided to create their own heroes Plates since its inception. Some are more than a century old, such as Carlo Leon Gallo’s painting showing the central part of the square in 1928. 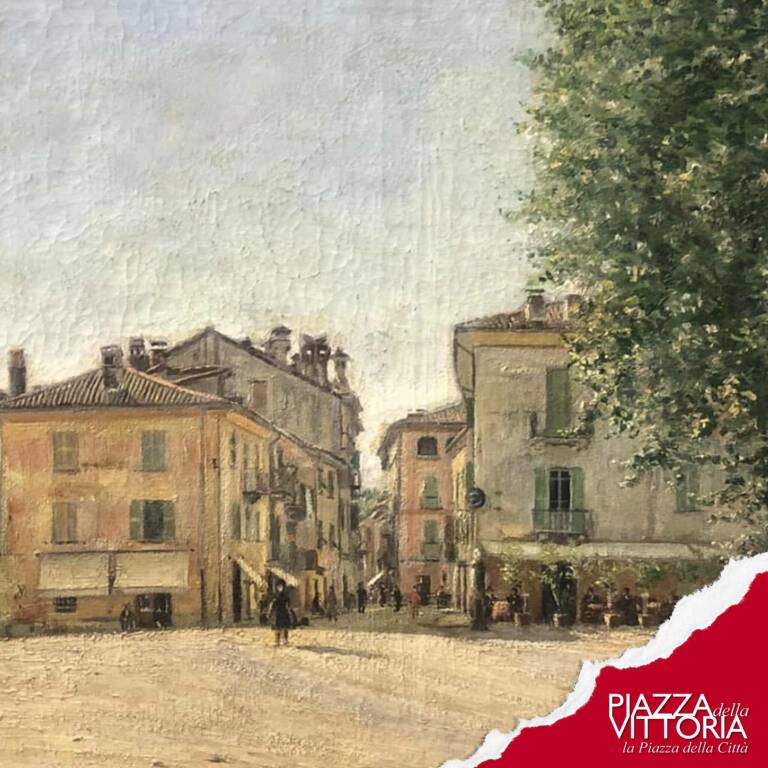 There are also many Postcards Which has its theme Piazza della Vittoria, photographed from different angles. Postcards help visualize its various transformations over the years, both structurally and socially.

So Piazza della Vittoria was one of the largest city ​​codes It came “Export” all over Italy and abroad. Above all by the many prison police officers who came to Cairo for training courses and wrote to their families using postcards. The practice until a few decades ago was also used to send greetings and best wishes.

L ‘It was a long wait, after 299 days (350 total) expected to start the protracted works due to the pandemic and bad weather and to achieve some technical and aesthetic improvements. but Today Piazza della Vittoria is ready to show off its new look. In fact, this afternoon, he cut the ribbon in the presence of the authorities who started the opening. 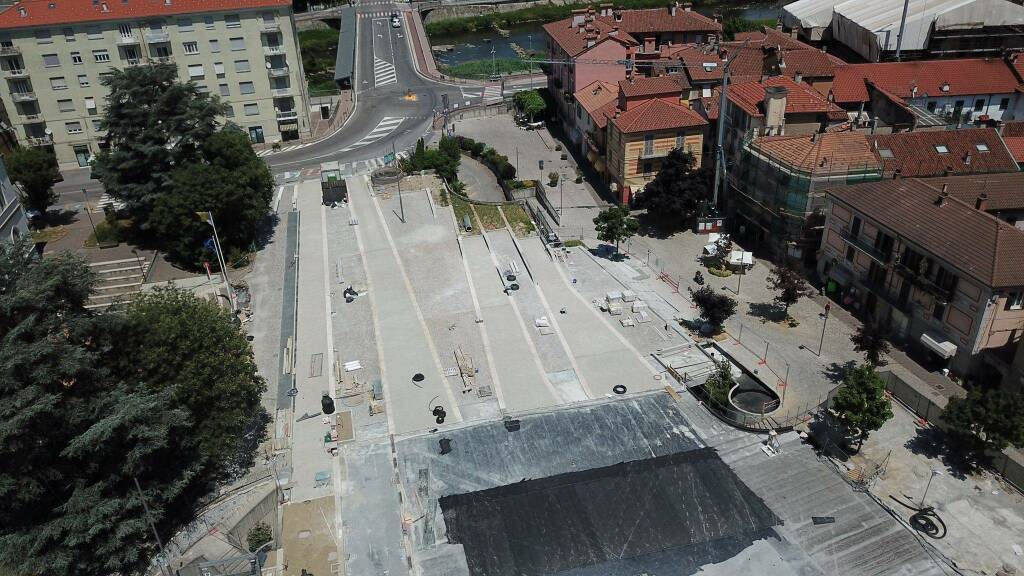 View from above during construction

A large space, previously ‘net’ and essentially one level, gives way to new fountains, walls, pergolas and furnishings. A special interest in not only architecture, but also functionality and the environment. All thelight Entrust the light bulbs and stripes driven byThat surrounds the stairs and the seats.

scenography Otto Fontan In the center of the square, also lit, welcomes passers-by who come from Rome and Aba Square: six of them are on the ground and two from above, bordered by some flower beds.

There is also an event space: next to the war memorial, a fixed round phase Which will host performances and evenings. 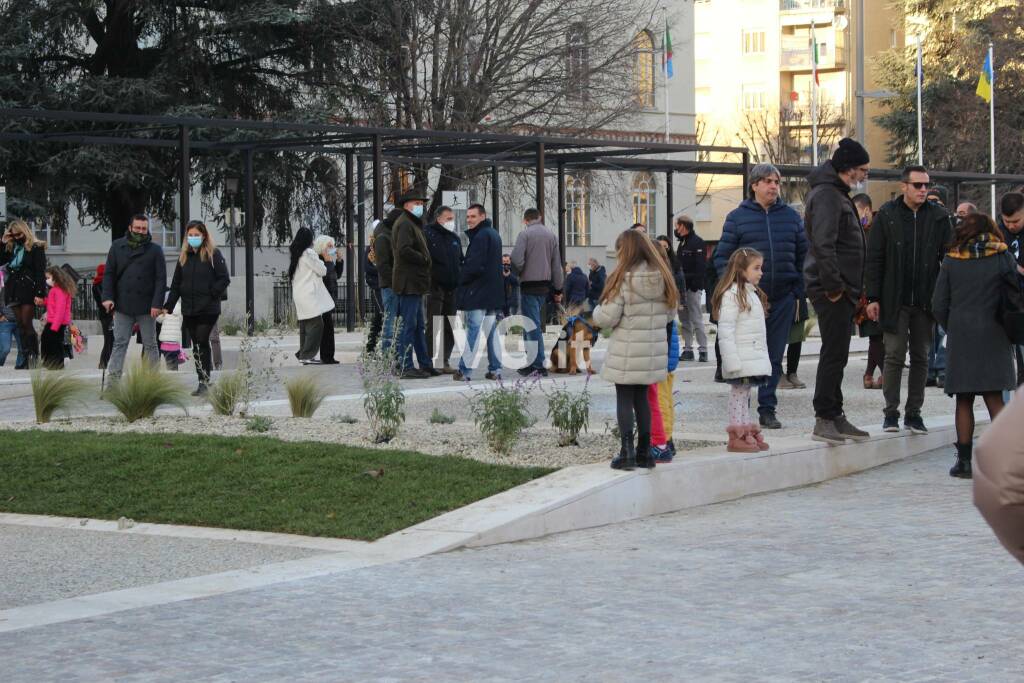 On the sides of the square there is one too pergola Composite iron with the aim of creating shaded areas above the walls that serve as benches and thus places for socializing.

Important interventions are also in the floors, with reconstructionWater leak From the attic underground car park. As work continues, it was decided to install an additional sheet to protect the casing on an area of ​​8,050 square metres.

As for the materials, there are three used: porphyry recovered from the old floors (thereby saving about 100 thousand euros), ”washed graveland the bush hammered limestoneWhich made some structural elements such as stairs and other furnishings. All in total about one One million and 840 thousand euros NS 15 working months.