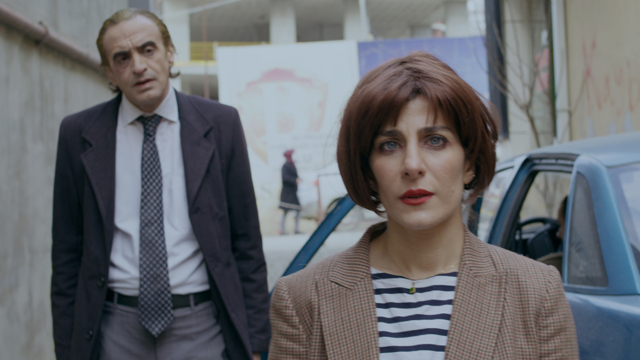 A masterpiece that arrived in the room owes its fame to the arrest of its Iranian writer Jaafar Panahi. But it will still be a masterpiece even if nothing happens to Panahi E Actually in Venice, as we wroteHe would have deserved more of a special jury award.

Bears do not exist It is a delicate and light film, magical and poetic, so much fun to watch, elements that deliberately take precedence over the questions posed, deep, extremely dangerous and at the same time extremely human. The best expression is Panahi himself, as in all the recent films, appearing on video, posing, in a simple and sober way, his calm humanity, his calm goodness and calm nature in the face of every problem and adversity. The physical body of those who make cinema again make the film here.

after putting it For a long time under house arrest – At least two of his films focus on this – then released and now imprisoned again, the Iranian director creates an almost omen. A framed movie, framed obsessively, but desperately trying to escape the framing. Reality reaches the protagonist, like a shadow that stretches, unforgiving.

Mind Prison
The shadow that also reaches us, because it is a film, although it is set in a minimal reality, the rural village of a village on the border with Turkey, also talks about our societies reduced to a minimum of thought, to a single idea and existing not only because Fear, rather, fear of what is not there or almost is. It speaks to us of a reality that has become a prison of the mind, which gradually becomes inseparable from the material mind, and that manipulative forces push us to construct ourselves, at least in part. And at last he speaks to us of a fact that is becoming more and more unknown. In fact, perhaps the main question that Panahi’s new film asks us is this: What truth?

Beyond his sometimes bedside aesthetic, Panahi’s film is actually a modern, rational, and enlightened work.

The time Panahi won the Golden Lion in Venice with Circle (2000), a conspicuous circular film about the situation in Iran, a theocratic country in which, nevertheless, there is a vote, but one cannot get out of its circle entirely – meant to be a kind of nowhere or oblivion where one forever spins in circles – not only For the undoubtedly important frontiers of the regime but also because the conservatives, now back in power (perhaps thanks to Trump), to maintain the status quo of the circular quagmire working intensely on fear, especially in rural settings and more generally among the poorer classes.

In this sense, sometimes with a small aesthetic behind it (it may seem a contradiction in an Islamic country but is fundamentally not: Panahi aims for a world cinema), Panahi is in fact a modern, rational and enlightened film.

A film in search of the fading light of rationality in a night of irrationality with the knowledge of how to evoke the lost magic of a night of the Magi, guided by the light of a star towards the savior, but universal symbols, however ancient. And the night here is really magical, almost fairy. Quiet and unsettling: in the dark, Bethlehem, with its various modern variations, small and large, looks out, like an illusion, the mirage of the night. In this regard, the film rediscovers the enchanting shadows worthy of Kiarostami, already featured in the previous feature film Panahi, wonderful three faces (2018), however, there has been talk of cinema and deception, as well as in woman (1997).

on the threshold
The director left Tehran to settle in a mountain village on the border with Turkey to get as close as possible to the crew and cast the film, which takes place in a Turkish town on the border with Iran, which is why he is actually directing. them through his computer.

Always on the threshold. On the threshold not only between tangible and virtual reality but on continuous reality (recreating) everyone and everything: from the villagers who prefer that a lie become true even in the form of formal truth (the section required of the director who in turn proposes to portray everything), as well as by the same Actors whose human conditions of constant imagination in life now irreparably affect their dignity.

READ  Dominion, this is the first teaser for the movie. It's a 5 minute intro!

Which is more true or representative of the two parallel love stories that unfold here? The alleged account of the film Panahi filmed or the village film with the same supposed credibility? But we are still far from the age-old question of where to delineate truth from spurious lies. Because everything is put on a very unstable threshold, constantly. As for Panahi himself, lost in the night, he found himself physically on the border line between Iran and Turkey, the threshold from which he jumped backwards, terrified. And as with all of us, when fear of everything now overwhelms rational thought, resorting to schemes between dark and light to make us lament the Cold War.

entanglement of formulas
“The townspeople have problems with the authorities, we have problems with superstitions,” said the village man who hosts the director in a wonderful nightly sequence. A man who seems so conscious of the interweaving of ritual formulas and situations now seems devoid of meaning and true conviction even to those who put it forth, and thus seems to be recited in communal life by the power of inertia, for it is a general opinion of propriety. The realistic impossibility of getting out of the circle, or even just imagining it.

Thus, those who should be honest and tell the truth act as they like or assert their little false certainty. Those who must recite the so-called truths prefer to stop and say them face to face because they are facing the final wall. And whoever should finally direct this play is trying to stay true to himself, but maybe he’s just blind. Perhaps in fact “there is no light at the end of this tunnel”.

As for cinema itself, the main art of reality, we are at the final threshold, or rather, almost in a state of surrender or, counterintuitively, at the final resistance. Neorealism – Abbas Kiarostami’s film school, Syed Panahi – seems impossible because it is almost devoid of meaning and at this point we allow the viewer to contemplate the unspeakable ending. The film, here understood as the whole cinema, takes off on its own. Or does reality become so destructive, a desire for a reality that finally expresses a reality worth living, a desire that is not expressed by chance a female character? Will this deviation from cinematic reality be to the point of stopping? And the actually confusing arrest with the director’s arrest, would it be a fresh start?

As we wrote at the beginning, it’s a framed movie. Not only from the room but from reality itself which has taken mental forms which, once settled, make it more and more square: if the viewer is attentive, he will notice that Panahi, albeit natural, is replete with shots in which the outside appears framed by computer screens, windows, doors, etc. That, until all these levels mingle with each other, and take the form of a collection of interconnected tales and the emergence of interesting and ancient proverbs. In addition, sometimes, a science fiction story consisting of many parallel facts, from which the viewer can exit and re-enter to discover new things as he pleases, and walks on the dark side of the moon surrounded by it. The most common cosmic darkness, in which, even here, the viewer can stop thinking about equally new points and angles. Perhaps the best way to express and rediscover the (common) sense of things.