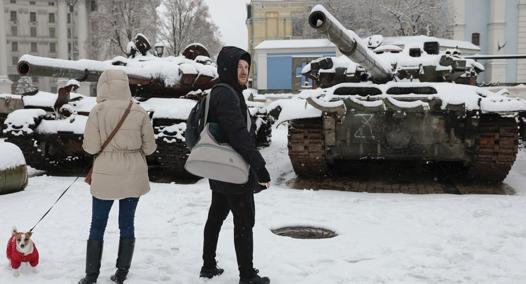 • The war in Ukraine today reached 270.
• The NATO Parliamentary Assembly approved the resolution presented by the Political Committee declaring Russia a terrorist state under the current regime.
• Norway said that it will help Ukraine with gas supplies for the coming winter, providing financing of NOK 2 billion (about 190 million euros).
• Ukraine, in which millions of people live without electricity, is preparing to face winter in tragic conditions, while the two armies are studying moves to Great frost season.

08:14 – evacuation of civilians from Kherson and Mykolaiv, fighting for survival

The government initiated the free evacuation of the population of Kherson. The initiative also affects civilians in liberated areas of the Mykolaiv region, who are fighting for survival, according to the Guardian: the fear that the damage to infrastructure caused by the war is too dangerous for people to withstand the winter. Deputy Prime Minister Irina Vereshuk advised residents of the two southern regions, which have been regularly bombed by Russian forces in recent months, to move to safer areas in the central and western parts of the country. He added that the government would provide transportation, shelter, food and medical aid. The evacuations come just over a week after Ukraine recaptured the city of Kherson – which nonetheless remains close to the front line – and surrounding areas.

08:07 – the Ukrainian energy supplier warned: we will have to live with power outages until March

Ukraine’s electricity grid and infrastructure suffered such damage from Russian bombing, and blackouts in the country are likely to continue until March 2023. The head of a major energy supplier, Sergey Kovalenko, expects Kyiv’s own Yasno, assessing the recent outages on Facebook. explaining that they are also forced to make emergency detachments to avoid further damage. Yesterday, for example, the limit was 391 megawatts, and more than 953,000 customers were disconnected. Power operators, despite the bad weather, are now doing everything they can to complete the restoration before the winter cold arrives. And even if there are fewer interruptions now, I want everyone to understand: most likely, Ukrainians will have to live in lockdown mode at least until the end of March, Kovalenko warned in his post.

05:39 – Zaluzhny, the Iron General won by following the soldiers

(by Lorenzo Cremonesi, sent to Kyiv) We only begin to learn some details about him in early April. The first sigh of relief was breathed in the capital. After weeks of intense fear, which began with Putin’s invasion on February 24, the Ukrainian armed forces and resistance volunteers managed to push back the Russian columns heading towards Kyiv. It seemed like a miracle that, against all odds, the army born from the defeats of 2014 achieved the impossible: The Kremlin General Staff lost the first round, which was aimed at a quick, almost painless blitzkriegFrom then on the war will have another step and The initiative will pass into the hands of the Ukrainian generals.

Then that was the name Valery Zaluzhny became famous as the Iron General: determined, courageous, alert strategist, ready to adapt men and means to changing circumstances, great theoretician of an army made up of small agile units, capable of operating independently of each other, aware of the bureaucratic giants from which the armed forces spring, being careful not to underestimate them, Because not taking into account the danger of the opponent remains one of the most serious mistakes in the war, as evidenced by the Russian disaster in recent months.

05:39 – Military Point – General Winter and War. What is happening?

(by Andrea Marinelli and Guido Olimpio) Snow, slush, cold. General Winter enters operations in Ukraine. was expected. Pictures show some tanks fighting in the swamp, while others provide details of how it was done Soldiers are trying to make their hideouts livableObservers have been discussing the contenders’ future moves for days. The Russians – they say – continue to install defenses in the south, and move some units to the east where they have been trying to advance towards Bakhmut for weeks. Multiple objective: hold on, cause losses, wait. Much attention has been paid to War industry capabilities other materials available. The indications are not uniform: some analysts express doubts (emphasize their lack of confidence) but there are always those who urge us not to underestimate the efforts and orders given by Vladimir Putin.

At least one person was killed and four others wounded in the Russian bombing of the newly liberated city of Kherson and the nearby village of Antonivka. It was reported by the deputy head of the Ukrainian presidential office, Kyrylo Tymoshenko, on Telegram, citing Ukrainska pravda.

05:34 – Kyiv, a military operation has begun on the left bank of the Dnieper

The Southern Operational Command of Ukraine said that a military operation has begun to liberate Cape Kinburn, a thin strip of land north of the peninsula of the same name at the mouth of the Dnipro River. The Kyiv Independent newspaper reported on this, noting that the attempts of Ukrainian forces to venture into Cape Kinburn on the left bank of the Dnipro River comes after the liberation of Kherson and other areas on the right bank of the river that took place on November 11. The command also reported that a storm at sea is helping Ukrainian forces. Ukrainian media asserted that the peninsula is one of the last places in the Mykolaiv region still under Russian occupation.

05:34 a.m. – Aiea, major structures at the Zaporizhzhia plant are intact

Despite the intensity of the bombing, major equipment remained intact and there are no immediate nuclear safety concerns. This was stated by the Director General of the International Atomic Energy Agency, Rafael Grossi, after inspecting one of his team at the Zaporizhia plant, according to the agency’s website. The team said the status of the six reactors is stable and the safety of spent fuel, fresh fuel and low, medium and high level radioactive waste in their storage facilities has been confirmed. But the widespread destruction at the site is a major concern.