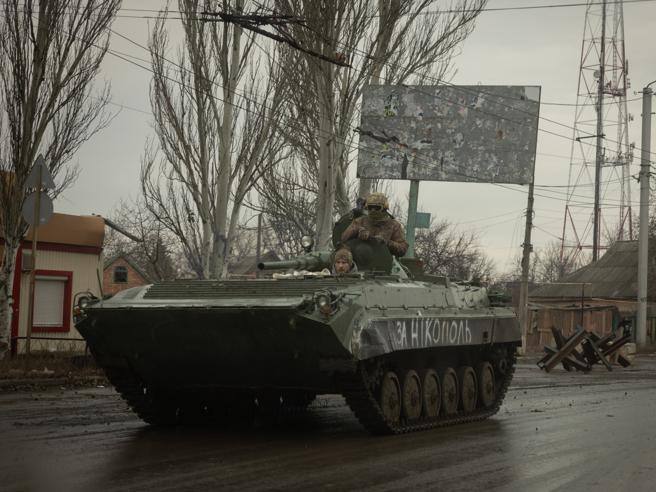 The news on Wednesday, December 14, live: at night another raid in Sumy Oblast

• The war arrived in Ukraine on 294.
• According to CNN, Biden is finalizing sending Patriots to Kyiv.
• Raising one billion euros for the Ukrainian emergency at the Paris conference.
• Zelensky to G7 Leaders: Thanks to you, my country still exists.
• Putin increases defense spending, A sign that the war will be long.

09:32 – the inscription on the drone, Ryazan’s revenge

A kamikaze drone was launched this morning in a Russian attack on Kyiv It was the Ryazan inscription!!! in Russian: the spokeswoman for the capital’s rescue services, Svetlana Vodolaga, told Ukrainian Radio Hromadske: bring it back guardianwhich publishes two images of drone fragments taken by an unofficial Telegram channel.

On December 5, a Russian military air base was attacked in the city of Ryazanin the west of the country. According to the Russian Defense Ministry, three soldiers were killed in the attack and a Russian Tu-95 bomber – used to attack Ukraine – was damaged. Kyiv has not officially claimed responsibility for the attack, but the Ukrainian Air Defense Forces have released photos of the aftermath of the attack with the caption, Ryazan. Rest in peace.

08:49 am – Zelensky’s advisor: We fear a Russian attack in January

The forces of the Russian Federation are about to launch another major offensive against Ukraine. This was stated by Oleksij Arestovych, advisor to the President of Ukraine, Volodymyr Zelensky, in an interview with Fejghin Live. According to Aristovich, Russian reservists can be mobilized In January and February in certain border areas to start the offensive. These are actually combat-ready units.

The Kyiv city administration announced on Telegram that the number of Russian kamikaze drones shot down by Ukrainian air defenses over Kyiv and the capital has risen to 13. These are Iranian-made drones. The Ukrainian Air Force reported on Telegram that the kamikaze drones launched this morning came from the eastern coast of the Sea of ​​Azov. The alarm has stopped in the capital, but there are fears of a new wave of attacks.

Russian forces also heavily bombed the towns of Nikopol and Maranets in the Dnipropetrovsk region of southern Ukraine last night. The Russians attacked the Nikopol region all night with Grad and Uragan multiple launch systems and heavy artillery – wrote the head of the regional military department, Valentin Reznichenko -. The enemy targeted two cities, Nikopol and Merhanets. More than 50 shells were fired at residential areas. A gas pipeline, some electricity transmission lines and several single-family homes in Nikopol were also damaged. In Marhanets, 12 single-family homes, gas pipelines and electric transmission lines were damaged, among others. There is currently no news of injuries or casualties.

06:45 – Kyiv, the Russian attack was launched by Iranian drones

The city of Kyiv, the capital of Ukraine, and the surrounding area have been attacked by at least 10 Iranian drones launched by Russian forces. This was stated by Kyiv Mayor Vitali Klitschko on Telegram.

05:59 am – Kyiv, explosions in the central district, which includes government buildings

The Russian attack on Kyiv in the early hours of the day hit Shevchenkivsky District, one of the city’s central districts, in an area that houses several government offices. The news was confirmed by the mayor, Vitali Klitschko, through a post on Telegram. The UK’s ambassador to Ukraine tweeted: No one is approaching the windows and explosions are heard outside. Russian attacks on Kyiv began early today.

Loud explosions were heard in Kyiv in the early hours of Wednesday morning after sirens sounded at 5.55am local time. It is not yet clear whether targets in the city have been bombed.

Anti-aircraft alarms were raised in Kyiv at dawn this morning. The Russian RIA Novosti agency reported, citing the city’s military administration. According to the data, the alarm sounded in Kyiv at 5.55 (6.55 Moscow time).

READ  He can be questioned by a New York attorney

05:11 – The Russian commander in Donetsk threatens to use nuclear weapons

Aleksandr Khodakovsky, commander of the Russian military forces stationed in Donetsk, Ukraine, told Russian state television that he is in favor of using nuclear weapons because he does not believe Russia has the resources to win the war. CNN re-released the photos. In the short video, Khodakovsky says at one point, while talking with the journalist in the studio: There can only be one escalation and we don’t have the resources to defeat NATO but we do have nuclear weapons….

05:07 am – China has banned the export of chips for military use

Beijing has banned the supply of military-grade processors made by the Chinese company Loongson to Russia, due to their strategic importance to the military. This was revealed by Newsweek, adding that it represented a potential setback for Moscow’s war effort in Ukraine. Western sanctions have forced Moscow to seek new suppliers of crucial electronic components, including those for weapons. Russian business newspaper Kommersant reported that Russian manufacturers were testing Chinese-made processors to replace those made by companies such as Intel, which has halted deliveries. But a source in the Russian Ministry of Digital Development said that the Chinese government has banned the sale and export of the processors due to their strategic importance to the Chinese army. Another source told the newspaper that the Chinese government has banned the export of Longsun processors to all countries, including Russia. She said that the best chipsets in China are used in the military-industrial complex, and this is the main reason why they are not available for foreign markets. According to Marina Miron, a researcher at the Department of Defense Studies at King’s College London (KCL), any export ban by China will further affect Russia’s ability to compete in the technology sector, forcing it to look for alternatives and increase its domestic capacity. for the production of microchips. At the same time, Beijing’s pressure is not expected to cause any major collapse in Russia’s technological capacity. For the researcher, Moscow has been suffering for nearly a decade from a shortage of chips, due to the sanctions imposed after the annexation of Crimea, and thus it has adapted to it.

READ  The case of Frau Kerakosjan: pro-Putin boaster or Moscow lobbyist? The former candidate who came out of nowhere to embarrass the SPD, between selfies with politicians (including Schroeder) and closeness to the governor

05:06 am – Macron: Russia stops attacks on infrastructure and civilians

The Russian war in Ukraine caused great suffering. Together with Cambodia, we call on Russia to immediately stop its bombing and attacks on the civilian population and infrastructure. International Partners, join us on this call. So on Twitter, French President Emmanuel Macron.

Russian forces bombed Sumy Oblast in Ukraine at night. Sumy Region Governor Dmytro Chivitsky said that the Russian military targeted the communities of Isman, Belobelia and Khotyn. There were no reports of injuries.

(Andrea Marinelli and Guido Olympio) military point assigned to wild frontswith raids on the south, and on command supplies of the two warring camps.

Buying their time, the Ukrainians postponed – at least in words – new large-scale maneuvers. But the Russians do not trust them And based on the intense exchange of blows in the past few hours, they do not rule out that it could Launched an offensive in the Zaporozhye region, the area that many experts have pointed to as a potential target. Kostantinovka Bridge, in the eastern sector of Melitopol, would have been damaged by an explosion, an attack attributed to the Ukrainians with Possible sabotage. Risks of the development of war affecting the logistical linewith complex movements. The resistance is repeated What happened before the storming of Kherson. The invaders return east to Bakhmut Some observers indicate that they may try to encircle. Note: They’ve been trying to apply for months with limited results, so it’s hard to get the picture. Also because advertising confuses.