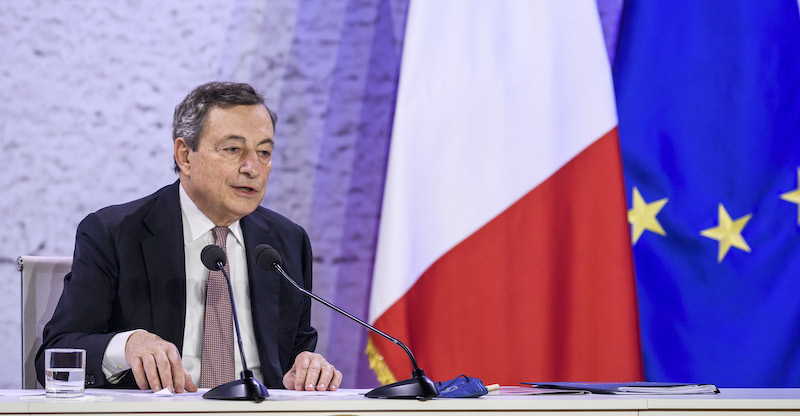 In recent weeks, Prime Minister Mario Draghi has spoken several times about the so-called “European ceiling” on the price of gas, that is, the price limit that European countries unilaterally impose to strengthen sanctions against Russia, on which more than one depends. A third of Europe’s gas imports.

Draghi returned to the topic in a rather decisive way to confirm Italy’s position in light of the EU summit scheduled for late May, during which European leaders will discuss the issue. In an interview with Corriere della SeraAnd He said That at this point in the war in Ukraine, Europe continues to fund Russia by buying oil and gas at a price that “has nothing to do with historical values ​​and production costs.” According to the head of the council, Europe must therefore impose a “ceiling” on the price of Russian gas with the aim of tightening sanctions and at the same time reducing the effects of the sanctions themselves on the countries that imposed them. : In practice, the EU should unilaterally decide to pay less for gas supplies, and impose its decision on Russia.

According to Draghi, Europe should assert its market power and at the same time begin to find other suppliers to reduce dependence on Russian gas. While European countries still need gas to heat homes and keep businesses open, Russia also depends on money coming in from Europe every day for gas.

In early April, during a press conference, Draghi He said The gas price ceiling is “the most reasonable thing, but it can only be done on a collective level. Europe has extraordinary market power: it is in fact the only buyer with strong market power. This strong market power can be exercised by imposing a price ceiling, which is remunerative but not as exorbitant as the current price.”

The position of the Italian government is important because Italy is among the European countries most dependent on Russian gas, so support for the gas price-fixing proposal was not taken for granted. Italy uses gas a lot for energy production (42 percent in 2020), and imports almost the majority of it (95 percent in 2021): a large part, so far, is from Russia, from which 43.3 percent of the gas comes. In recent years, other countries from which Italy bought the most gas were Algeria (31 percent of imports in 2021), Qatar (9 percent), Azerbaijan (10 percent) and Libya (4 percent).

Another country that imports large amounts of gas from Russia is Germany, the richest and most influential country in the European Union. In 2021 Russian gas Like 55 percent of German gas imports: Given that Germany has almost negligible domestic production, this means that half of that consumed in Germany in 2021 came from Russia. And in Germany, natural gas plays a very important role: it is used to produce about a quarter of the energy that the country consumes each year.

Germany has already announced that it will oppose any reduction in Russian gas supplies, on which huge parts of its economy depend. “It is clear that we must cut off all our economic relations with Russia as soon as possible,” He said At the beginning of April, German Economy Minister Christian Lindner. But gas cannot be replaced in the short term. We will do more harm to ourselves than to the Russians.

READ  Russia, Vladimir Putin at the Orthodox Christmas service in the Kremlin

Although both are highly dependent on Russian supplies, Italy and Germany have opposing positions: German Chancellor Olaf Schulz has repeatedly said that an immediate end to Russian gas and oil imports would hurt the EU economy, while Draghi says a prolonged war would have effects. Big on European finance, growth and jobs.

For Germany, cutting off Russian gas in a very short time, which will be necessary in the event of sanctions on gas supplies, is practically impossible: the government says it will. about two years To find alternative sources of energy, but there are higher estimates of four or five years.

Moreover, many advocates of the industrial world they do Pressure the government to demand a more gradual limitation of Russian gas supplies. Last week, Chancellor Olaf Schultz met with the leaders of Deutsche Bank, Mercedes-Benz and Siemens who expressed concerns about the potential consequences of the disruption to gas supplies from Russia.

The Italian government, on the other hand, has already found an agreement To start the so-called “diversification”: by 2024, Italy will receive about 9 billion cubic meters of gas per year from Algeria, compared to 22.6 billion cubic meters imported in 2021. After a meeting between Prime Minister Mario Draghi and Algerian President Abdelmadjid Tebboune. In the interview with Corriere della Sera“Diversification is possible and feasible in a relatively short time, shorter than we could have imagined just a month ago,” said Draghi.