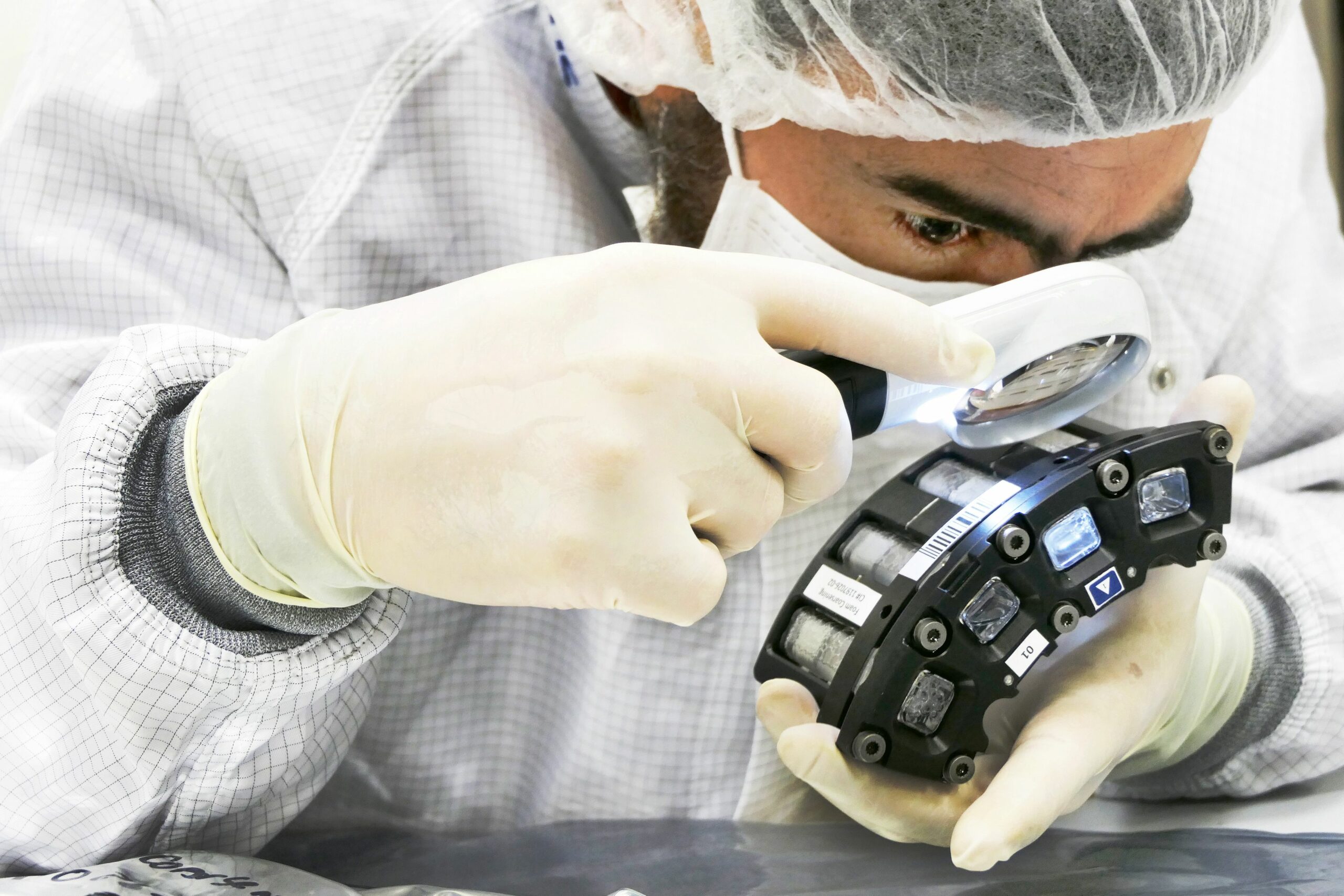 The intent of the experience FSL (Fluid Science Laboratory) Dynamics of Soft Materials – Hydrodynamics of Wet Foam (Foam Roughing)is to carry out investigations on so-called wet foams, in particular on the size of bubbles and the dynamics of their restructuring, as in the case of the phenomenon fusion.

As it is easy to guess, the microgravity conditions provided by the International Space Station provide the opportunity to better study these topics; Moreover, microgravity is necessary to study the phenomena of bubble relocation, such as swelling and solidification, which are unrelated to the phenomenon of fluid discharge caused by Earth’s gravity.

The experiment was carried out by Airbus DS GmbH (Friedrichshafen, Germany) funded by the European Space Agency (ESA).

As with all experiments in the FSL holder, control and data collection for the study are performed by Belgian User Operations and Support Center (B.USOC) in Brussels, Belgium.

Foams can have potential utility in microgravity environments, for example in fire suppression, as a water purification system by flotation and as a light and resistant material for various uses (rigid foams).

READ  Our representation of reality limits what we can know

on the earth , flotation Bubble-based mineral (or flotation) is one of the oldest and most important bubble application systems in liquids. This process is being studied as a method of cleaning water, and is considered very interesting especially in the oil industry. Liquid foams are widely used in many applications: cleaning, the food industry, the pharmaceutical industry, against oil pollution and firefighting systems, to name a few.
Rigid foams are receiving increasing attention due to their low density and good mechanical strength. They are produced by melting the material to be used to form the foam, and then solidifying it with specific techniques. In most applications, foams have a high liquid content as they process. However, scientific knowledge in the field of wet foams is unfortunately very limited; Therefore, a better understanding of its properties can help with its use and related industrial processes.

Foams are gaseous dispersions in liquid or solid matrices. It is usually formed under conditions where the substrate is liquid (in solid foam the substrate is initially liquid, and then solidifies). Foam behaviors are different in microgravity and on land, as drainage is absent under microgravity conditions. The term “drain” refers to the non-reversible flow of liquid passing through the foam, which causes it to accumulate at the bottom of the container and the consequent decrease in the liquid contained within the foam itself, just as happens for example with the foam from your favorite beer. In this case, the bubbles deform into polyhedra, across the top of the foam, giving life to the so-called “dry foam”. When the liquid films between the bubbles are too thin, they break and the foam collapses. This occurs when suitable stabilizing agents (so-called surfactants) are absent.

READ  These little creatures were "unknown" to science, but the truth was revealed

Microgravity provides the opportunity to conduct research on the so-called “wet foam”, which cannot be fixed to the ground due to the phenomenon of drainage (drainage is faster when the foam is more humid). A particularly interesting transition should be observed in wet foam beyond the point where the bubbles are tightly packed, but still spherical in shape. For messy foams, the transition (jamming transmission) between the bubble’s polyhedral shape and the spherical shape, occurs when the liquid fraction Phi (Φ) is close to 36%; where Φ = 0% corresponds to air without liquid and Φ = 100% corresponds to liquid without bubbles. At low values ​​of Φ, the bubbles are deformed to form polyhedra and the foams behave like a soft solid. Conversely, at high values ​​of , foams behave like a viscous liquid in which the bubbles can move independently. Similar transition points exist in other systems of randomly packed materials or objects, such as sand, clay, emulsions, etc., which are currently of great interest. The physics of wet foam is still poorly understood and this research aims to fill this gap.

especially, FSL Soft Material Dynamics – Wet Foam Hydrodynamics (Foam Roughing), to study aqueous and non-aqueous foams in the microgravity environment of the International Space Station with special attention to the accretion phase, that is, the transition of gas between bubbles due to pressure differences. This phenomenon causes the average bubble size to grow with respect to time, exponentially, with a net change at the transition point Φ = 36%. The project then addresses the behavior of foams under mechanical stress, in which re-bubbling also plays an important role.

READ  Under the net you earn nearly 10 years. Science says so (but also Pietrangeli) - Torino Ogi

NASA astronaut Jessica Meir FromExpedition 62install the experiment in fluid science lab (FSL) from European Columbus Laboratory on March 6, 2020; Other heroes were later released with SpX-22 In June 2021 (FOAM Batch 2) and then another with the shipment Cygnus NG-17 In February 2022 (foam batch 3, Launched with PASTA).

After the PASTA session ended, Samantha installed Batch 3 samples on it August 10, 2022. Later, when the Batch 3 session also completed, he removed the samples and installed a Batch 2 on October 4 To resume some tests that were considered to be of lower priority and therefore have been postponed.