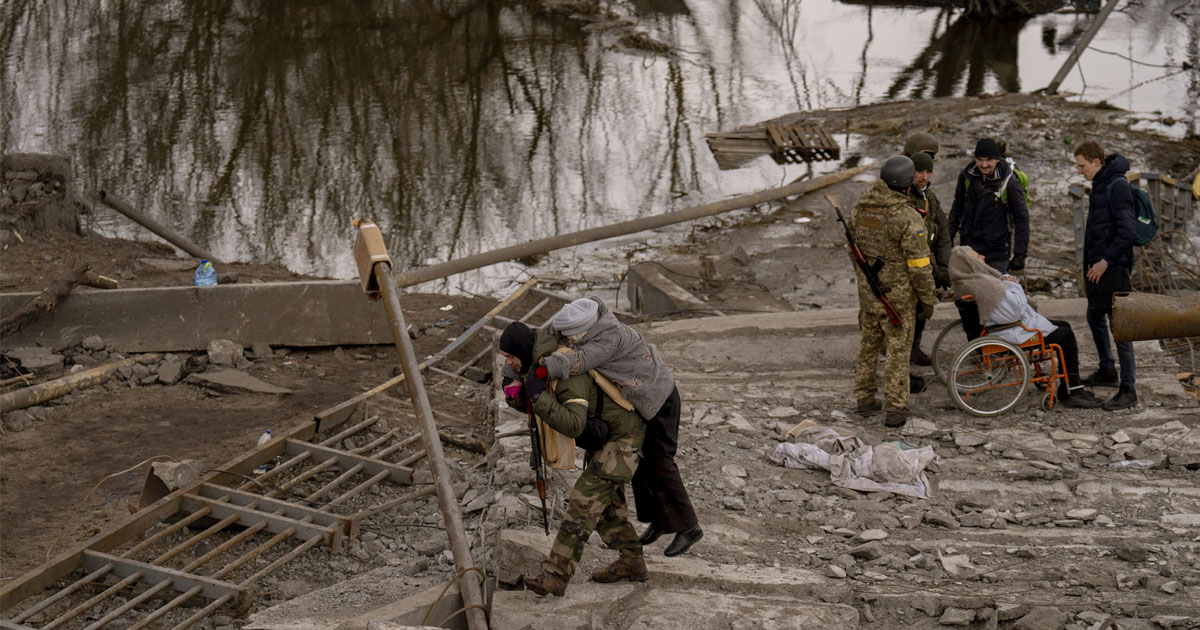 Loud explosions were heard, this evening, in the coastal city of Odessa, the target of the Russian advance on the Black Sea coast. BBC. We just heard three or four loud explosions coming from the west. We were told that it was the Ukrainian defense system that shot down the Russian missiles coming from one of the many warships off the coast here.” The Ukrainian Navy announced in Odessa, this morning, that it collided with a Russian ship causing great damage.

Zelensky: “We will insist on negotiations until peace”

“The third round of negotiations was held in Belarus today, and I would say the third and final, but let’s be realistic. Therefore, we will talk, we will insist on negotiations until we find a way to tell our people ‘This is how we will reach peace,'” Ukrainian President Volodymyr Zelensky said in the video posted on Facebook, Accusing the Russians of violating the agreement in the humanitarian corridors.

The large Russian military convoy outside Kyiv is “still disabled, still obscured.” Pentagon spokesman John Kirby said at a news conference today. “We don’t appreciate that he made progress at the end of the week,” he added. Russian forces, according to the United States, are not about to capture the capital: there is “heavy fighting” outside Kharkiv and they are “still trying to encircle” the city of Chernihiv in the north.

Russia and Ukraine will create a communication system “for the mutual exchange of information on the preparation and implementation of the evacuation of civilians and foreign citizens.” This came in a statement issued by the headquarters of the Russian Coordination Agency for Humanitarian Relief, citing him InterfaxOn the subject of a cease-fire to open the humanitarian corridors agreed upon, starting at eight o’clock tomorrow morning.

Zelensky: “I will stay in Kyiv, Russia opens the lanes only to make a show”

“I will stay in Kyiv, in Bankova (Ukrainian presidential building, so) What it takes to win this war. I’m not hiding and I’m not afraid of anyone.” Ukrainian President Volodymyr Zelensky said this in a new video posted on Facebook. “In the south of the country, we have seen a degree of ‘Ukrainian’ that we’ve never seen before. They hit an old bakery, a 19th century church. because? Human corridors only keep them in the direction of their country for a few dozen people. because? Just to make a scene, to film them with cameras and to tell how they saved the residents. What an understatement,” referring to the Russian army.

US: ‘One hundred Ukrainian refugees cross Poland’s borders every minute’

One hundred Ukrainian refugees cross the border into Poland every minute. This estimate was made by US Ambassador to the United Nations Linda Thomas Greenfield. “Putin clearly has a plan to destroy and intimidate Ukraine,” she said, saying she was “outraged by Moscow’s increased attacks on civilians” and concerned “about the condition of the population, especially women and girls of both genders. Violence based on violence, the LGBTQi community, as well as the elderly and people People with disabilities are the most vulnerable. We also call for the protection of all children at risk, including unaccompanied children.” “Children should never, ever take part in wars.”

READ  “I am the youngest woman in the race, I grew up in a garage” - Corriere.it

Putin: I will not send conscripts and reservists to Ukraine

Russian President Vladimir Putin has announced that only professional soldiers, no reservists, no substitutes, and no conscripts, will take part in military operations in Ukraine. I want to assure that conscripts do not and will not take part in hostilities and that there will be no call-up of reservists. In the Women’s Day message released by the Kremlin, Putin said:
And in a message to the mothers, wives, sisters and girlfriends of the Russian army, Putin expressed confidence that these soldiers “who are currently defending Russia on the battlefield in a special military operation”, “will reliably guarantee the security and peace of the Russian people.” Putin also announced a new subsidy for low-income families with children aged 8-16 and noted that the union “already makes monthly contributions to pregnant women and low-income families with children up to the age of seven”, as well as for people raising minors who They are between 8 and 16 years old alone. The state will do everything in its power to support the families. This is our top priority.”

Foreign Minister Luigi Di Maio had a “friendly” telephone conversation this evening with UN Secretary-General Antonio Guterres on the Ukraine crisis, during which the pillars of the Italian position were emphasized. The Minister affirmed “Italy’s full support for the initiatives and actions of the United Nations, foremost of which is the humanitarian aspect, noting the priority need for a truce to allow the evacuation of civilians and the opening of humanitarian corridors, as well as in implementation of what is required by the necessity of” a coherent voice by the international community on the basis of the resolution adopted by the General Assembly in March 2, by 141 votes in favour, 5 against, and 35 abstentions. The Minister and the Secretary-General discussed the mediation margins that the United Nations and other actors can have in order to contribute to a speedy resolution of the conflict,” Farnesina announced.

Russia announced a ceasefire to allow humanitarian corridors in Ukraine from 9 am tomorrow (8 am in Italy) to evacuate civilians from Kyiv, Chernihiv, Sumy, Kharkiv and Mariupol. This was stated by the Headquarters for Interdepartmental Coordination in Moscow, citing the State Agency tax. The humanitarian corridors had already been announced this morning, but were not subsequently laid down on mutual accusations of sabotage.

Russia has publicly threatened to cut off the supply of natural gas through the Nord Stream 1 pipeline. This was stated by Russian Deputy Prime Minister Alexander Novak on state television.