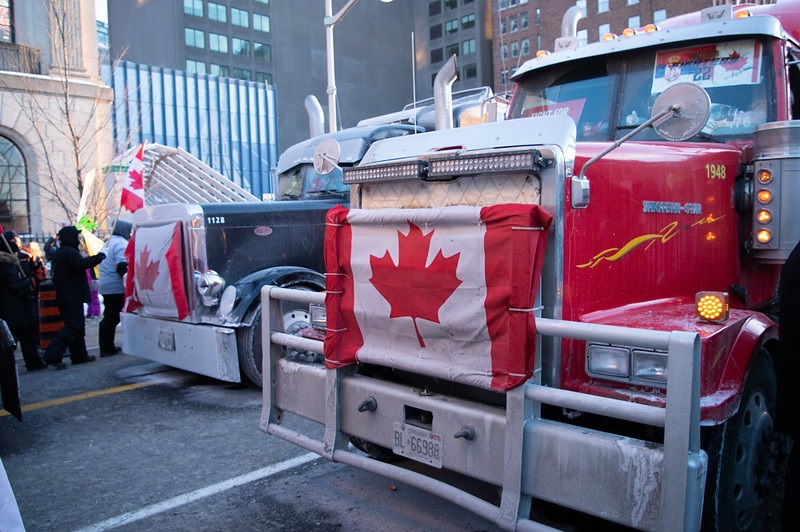 A convoy of Canadian truckers arrives in Europe. Trucks marching from Paris to Brussels are considered right to resist in the name of abused freedom, against the new Babylon of rules and duties, instead of arbitrary, licensing, repression. It is necessary to measure determination and caution by responding with the weapons of the law, Casola writes

To one of my generation, the road transport strike evokes a tragic event that struck world public opinion in the early 1970s: a conspiracy against the United Popular government in Chile Salvador Allende September 11, 1973 was announced by a number of mass protests, including the truckers’ strike of the previous year.

In fact it was – in a technical sense – the lockout that began on October 9, 1972, when 165 road transport companies stopped more than 50,000 trucks and chased more than 40,000 drivers. The strike / lockout lasted 24 days; It was joined by taxi drivers, far-right unions and paramilitary groups Pinochet. The protest brought the country to its knees, already trying for a number of serious reasons, including three-digit inflation (and a few hundred), which apparently devastated the road transport sector due to rising fuel prices and tariffs. It should be noted that Chile is a long and narrow country (over 4 thousand km), with no public transport system (I think it is more or less the same now).

This writer looks closely at the effects of general inflation on a South American country. In 1982, I was sent by the CGIL to various states on the continent (then almost all under the yoke of military dictatorship) to bring unity and support to the democratic opposition operating under semi-secret regimes.

READ  Prince Charles and Camila in Canada: The beginning of the tour amid controversy

The Falklands War was raging in Argentina; Inflation was so high that mint could not print the new currency and stamped new values ​​on the banknotes in circulation (I did not use the adjective “old”) because they were just a few days after they were printed. Before.

With this hypothesis, I am not saying that history will repeat itself in the protests of Canadian truckers that will spread to the United States and Europe. This is not the first time that political and civilian institutions have been so strong and resilient that they have been called upon to face such severe crises as the economy, terrorism, epidemics (of which we have not yet emerged), and the threat of war. In the heart of Europe and on many chess boards (real wars have been going on for years); However, this phenomenon is worrying. Because over the years, protests around the world, even violent ones, have erupted for reasons that do not justify their actions.

Consider the case of yellow underwear in France, which raised fears of a new ’68 eruption and, which lasted longer than the May protests. To be stunned by the No-Vox movements and the amazing invention of the vaccine unleashed almost everywhere, a deadly set describes the ancestral troubles experienced by humans through drugs and the false web. It has been proven to be a virus that spreads unchecked without the possibility of immunizations and vaccines.

Pandora’s box was opened, the “seven plagues” reappeared, the Knights of Disaster began to run again, and the angel opened the seventh seal. In retaliation, protests erupted in Canada Measures to impose vaccination duty on truck drivers transporting goods to the United States. It quickly grew into a huge movement Against the measures taken against the epidemic that aimed primarily at the fall of the Trudeau government. The Canadian Anti-Hate Network, a group that studies extremist movements, has documented links between the movement’s organizers and the far – right in North America.

Thousands of people took to the streets in Ottawa. The people of the area are furious with the constant noise, traffic jams and harassment. The “convoy of free trucks” has attracted the support of the former US president Donald Trump.

Mayor of Ottawa Jim Watson Talked about The situation is “out of control”: in his opinion, the protesters described it as a “threat to the security of the city and all residents”. By declaring a state of emergency, Watson sought the assistance of the federal government and other jurisdictions.

Now the “convoy” is coming to Europe. Trucks marching from Paris to Brussels, against the new Babylon of rules and duties it is considered right to oppose in the name of abused freedom, instead, arbitrary, license, repression. Democratic regimes cannot function as they do in Tiananmen Square. It is necessary to measure determination and caution by responding with the arms of the law. However, this does not necessarily mean tolerance and flexibility.

It is only fair that a state should use its inalienable power to protect the freedom that extremists provoke for themselves and to trample on for others. One serves his country – as it was once said – even while in custody at a petrol can. But there is no revolution to that tank. Franklin d. Roosevelt Through the Wagner Act of 1935 – in Italy, the President initiated legislation in support of trade union action that found expression in labor law for more than thirty years. But during World War II, when the unions in Chicago – with very dubious targets – blocked public transport, the giant Democrats sent troops to restore order.

READ  Which are the most Googled cities in the world in 2022? The results will surprise you (and there is an Italian one).

Rights written in the blood of freedom fighters. But “copyright” (copyright Alessandro Barbano) The main enemy of freedom.