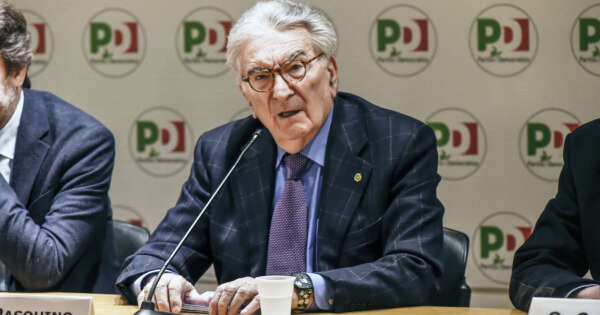 Among the Italian political scientists, Gianfranco Pasquino It is among the most approved. Professor Emeritus of Political Science at the University of Bologna, since 2005 a member of the Accademia dei Lincei. Among his many publications, we remember the most recent one: Between Science and Politics. Biography (Utet, 2002).

“The way the lists were formed is further evidence of the oligarchic character of our political system.” So Sabino Cassese in an interview with this newspaper. How do you see that?
Lists are shaped quite differently from party to party. I am not able to generalize and I am not looking for democratic methods or oligarchic methods of rule, etc. I prefer to talk about functional patterns. Each party decides what is best for its organization, for its fighters who will then have to do some campaigning, and for the candidates it has to choose. We cannot say that the Democratic Party chose its candidates in the same way that Giorgia Meloni chose them for Fratelli d’Italia. We have known for a long time that Forza Italia candidates are chosen by Silvio Berlusconi and we have seen that 5Stelle also uses so-called “parliamentarians”. From time to time, the Democratic Party also holds primaries that commentators unfortunately laugh at, making a mistake.

Why, Professor Pasquino?
Because if it is done with decent methods, it is a democratic method. So I am not generalizing, the candidates have been selected in a certain way and I am able to criticize the actual modalities and choices from time to time. I wonder, for example, what was the point of skydiving Elisabetta Casellati in Basilicata when she was elected and desired in Veneto, while in her place is the famous Anna Maria Bernini of Bologna. Of course, I have a lot to say about the fact that Piero Fasino will be an MP from Veneto after he was MP at Modena College and Sassuolo. This also affects the power of the filter. Fasino is a very powerful man in his party and he chooses where to go. In Casellati’s case, Berlusconi and Tajani would prefer to run it in Basilicata. But it cannot be generalized. We can say that the method is still not convincing to us and then we entrust the rest to the voters. It will be up to them to assess whether they are good candidates or not, if they are campaigning, if they represent the territory, if they know not only to listen but as I say also to talk to their constituents, or if it is just a process in my re-election mark and good luck .

In the discussion he opened reformer, Sergio Fabrini, another authoritative scholar of politics and institutional systems, said, “The elect become entrepreneurs themselves, and thus act on the basis of the immediate advantages that they can win in the political market.” do you agree?
No, although I appreciate its rigor and clarity. I disagree because, again, we need to differentiate between the different parties. In the Democratic Party there are jobs. The people who started politics before the Democratic Party have been there and continue their careers. They are not “entrepreneurs themselves,” as Fabrini defines them. In my opinion they are just professionals, sometimes also because they have acquired real skills. In order not to remain ambiguous. You can not do without a person like Franceschini, because he is good and has skills. And it is wrong to refuse Cassini’s candidacy, because he, too, is good and has the skills. We are faced with professionals and semi-professionals, as Domenico Fisichella once said to me “a gentleman in politics”. Of course he was referring to himself, i.e. people with a professional resume that would allow them to do a bit of politics and then return to their profession without any worries. This is true for the Democratic Party as well as, on the other hand, for the Brothers of Italy, because it is the only surviving party. MSI was an organized party on the ground. This is not true in other cases. Like Forza Italia. Berlusconi is right: his candidates already belong to civil society. If anything, the verb is wrong. Candidates do not “come” from civil society, it is he who “takes” them from civil society and he is what “pushes them back” to civil society when they are no longer needed. It is not possible to generalize, I insist, but to analyze each case individually, and to construct an explanation of the individual case, especially when some choices give rise to controversy which is not always false.

Coming to the “fields” facing each other. What do most of the center-right fear: Meloni’s leadership?
I fear the inexperience of a non-marginal part of that ruling class. I fear the excessive joy of winning the elections, the inability to understand what Europe wants from us. Above all, I fear sensationalist gestures intended to demonstrate that what they will form is a “new” government, and we have entered a “new” era. All this I fear. I am afraid of everyone. And that enthusiasm Giorgia Meloni left itself away. His performance at Vox has stayed in my eyes and partially in my ears, too. I don’t want to see Giorgia Meloni like this again. What is certain is that if she goes to Europe with this determination, they immediately kick her out.

We move to the left of the center. What remains of the “widespread” that Enrico Letta has focused on?
Unfortunately, these politicians did not study political science. They are really unfamiliar with her and don’t really know what they are talking about. I am not referring only to the electoral law, which they know nothing of except to protect their interests. They don’t really know what they’re talking about. “Broad field” there was no need to say that. For if one has acquired the basics, I say no more, of political science, to know that alliances are made in politics. This is the prevailing principle. Coalitions are formed in all political systems. Even in Britain, from 2010 to 2015 there was an alliance between Conservatives and Liberals. They even set the rules for the alliance. Not at all “wide field”, we are talking about coalitions. And alliances—there is great literature on the subject—are forged between close, geographically close, ideologically compatible parties that are able to converge programmatically around what they believe are the country’s priorities. Lita tried but apparently did not know the theory of coalitions. Then he did his best, because he also had to deal with the very ambitious, the unjustifiably ambitious, the undeservingly ambitious, whose ego, as I could say and write, was in a perpetual erection. It is difficult to deal with these people. Those who manage to make coalitions better manage to get consensus. Giuliano Urban, a professor of political science, told Berlusconi at the time: “Make two coalitions: one is called the Polo of Good Governance and the other is called the Polo of Liberties. In this way you can combine both the former Missini and the Lega.” This is what happened in ’94. It is the product of the political skills of political science professor Giuliano Urbani. Let me add a tip that is not meant to be a ‘professor’: you should always ask those who speak/write on institutional election issues about the scholarly books/articles they have read, and which authors support their analyzes and assessments. In order not to feed an already pervasive and great confusion, it would be entirely appropriate to clean up the terminology to bring the debate back to the hard and rigorous tracks of political science.

In Italy, there are still those who argue that you win by taking the position.
Political science tells another story…

Which?
The center is a geographical location. We don’t know how many electors are in the center, but we know above all that there are electors on the far left and the far right. We cannot lose them. We have to go find them. Knowing, first and foremost, that we must motivate voters to come and vote. In Italy, those who knew how to motivate pro-sanctions would win elections in a big way, at least by finding the key to reaching certain sectors. There is no “abstaining party”. Here, too, we avoid harmful generalizations, as well as erroneous ones. These abstainers do not know where they are from, if they are from the middle, from the right, from the left. There is everything, they cover the entire political spectrum. It is a matter of searching for voters on specific issues. Political science suggests that there are issues of political value: famous issues. You have to find the right issue and you also need to know the common values ​​of those voters you are looking for. This common value can be, for example, simply democracy in Europe, or something else, perhaps of an opposite sign. For example, we maintain a high level of inequality because we voters are good and will therefore be able to benefit from it. Operations that require political intelligence are combined with the politician’s ability to remain in the region. How could Fassino rally the Veneto voters who only saw him on TV? Cassini mobilizes the voters of Bologna because he has lived here since he was born, because he campaigned, and because he is very well known. This is why it is an added value.

An expert on the Middle East and Islam, he has been following Italian foreign policy for a quarter of a century and especially all events related to the Middle East.