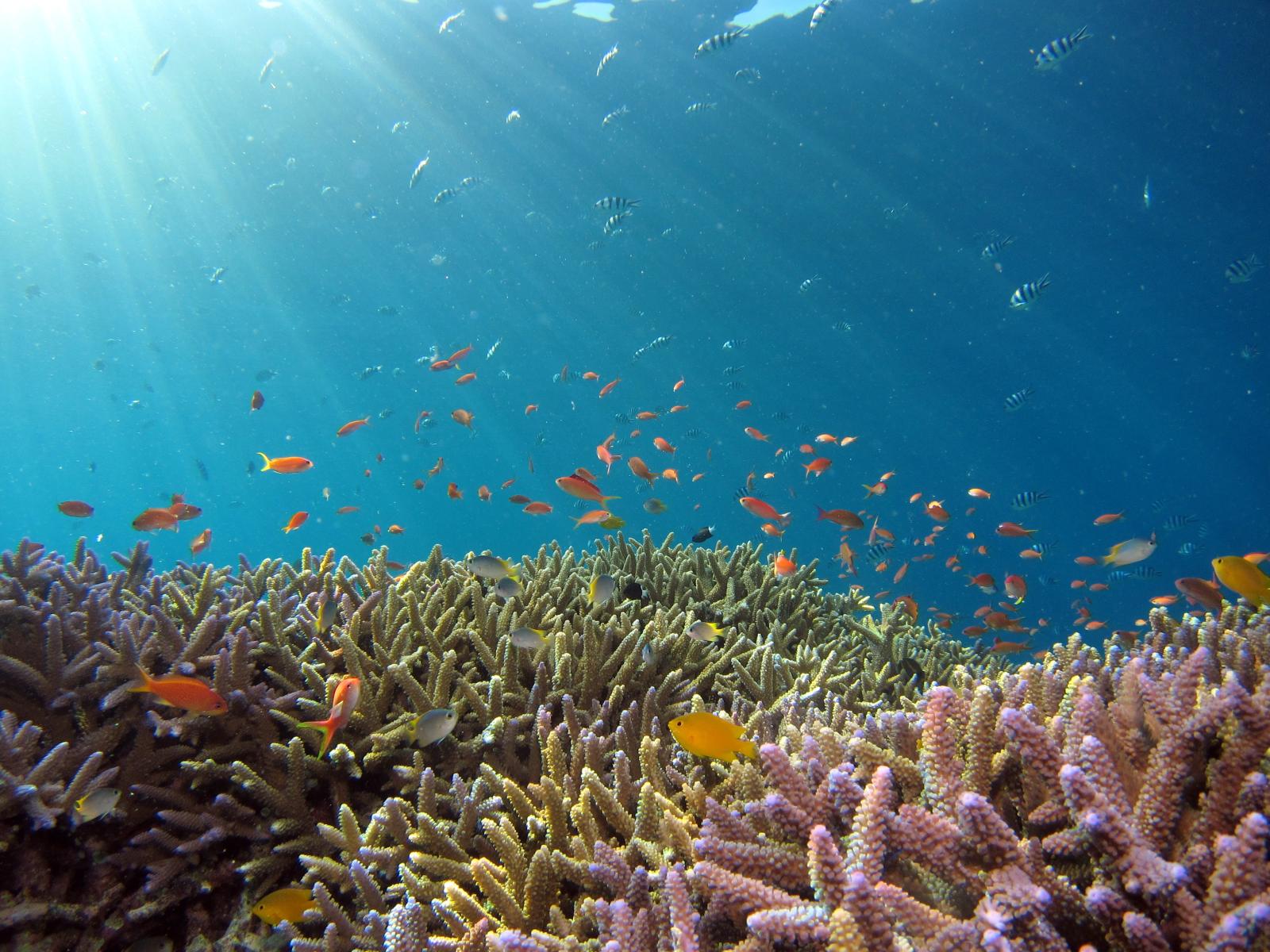 With their colorful architecture, coral reefs are one of the most amazing underwater ecosystems, but also one of the most vulnerable. Their threat is a myriad of human influences, including: pollution, overfishing, the use of influential and destructive fishing practices and the presence of invasive species. Hanging above all is the great shadow of climate change, with the acidification of the seas and the warming of surface waters, causing the so-called coral bleachingCoral bleaching. But all is not lost: it is already possible to work on restoring the barriers and helping them to resist the difficulties. Only these days a guide to restoring coral reefs in the Maldives has been published: Maldives Coral Reef Restoration Guideby researchers at MaherCenter for Marine Research and Higher Education of the University of Milan Bicocca.

“Coral reefs are subject to influences of a different nature, whether human or natural, or natural events amplified by human activities,” explains Simone Montano, MAHRE researcher and author of the publication. Coral cover in the Maldives has extended as much as 100% in some locations in the archipelago. In 2016 globally, there was one of the most dramatic episodes of the series coral bleaching The impact was catastrophic, particularly in the Maldives, where 90% of the reef was lost in the first 20 meters of water. So we have started a new line of research to restore damaged coral reefs with a special focus on the Maldives.”

Coral reefs are an important biodiversity hotspot: while they cover only 0.2% of the sea floor, they host 25% of species overall. Moreover, they protect coastlines from erosion and are a livelihood for local economies, both for fish resources and for attracting tourists, which in some places, including the Maldives, have become the main economic engine. The elaborate limestone structures of coral reefs have been created over thousands of years by microorganisms: appendages. They are 1 to 3 mm large invertebrates, related to jellyfish, that make up true superorganisms, congregating in countless numbers of individuals to form colonies and corals. Like jellyfish, polyps contain stinging cells, but the main feature of reef-forming species is their ability to secrete coralite, or calcium carbonate, to form an external skeleton. Over time, these calcareous skeletons gradually overlap, forming corals: the deep layers are the oldest and are now uninhabited, while in the superficial layers, polyps continue to function as a bio-creator. Septums are living and dynamic structures, which continue to grow naturally year after year. Herein lies the problem of acidification of the seas, a phenomenon resulting from the increase in carbon dioxide emissions. The seas and oceans absorb the carbon dioxide in the atmosphere and turn it into carbonic acid, and this on the one hand helps mitigate climate change, and on the other hand leads to the acidity of the water. And this is a big problem for corals, because carbonic acid dissolves the calcium carbonate that makes up corals.

Of course, carbonic acid is excessively increased due to human activities, but it is usually found in the seas because the organisms that live in them – including polyps – breathe and emit carbon dioxide. The problem is effectively solved thanks to the symbiosis of unicellular algae, zooxanthellae: thanks to photosynthesis, the algae excrete carbon dioxide and favor the formation of calcium carbonate necessary for the construction of the calcareous skeleton. They also provide the octopus with oxygen and nutrients, as well as give corals the bright colors that we admire so much. In turn, zooxanthellae live in a safe environment and receive from polyps the compounds necessary for photosynthesis: carbon dioxide from respiration and inorganic compounds from metabolism. In case of severe stress, as in the case of high surface water temperature, corals lose this basic symbiosis: they literally expel algae and get sick, becoming susceptible to bacterial infections. They also lose their colors, hence the term “bleaching.” This is not necessarily an irreversible process: colonies can recover naturally, but it takes a long time; Above all, anthropogenic stressors do not help colonies recover.

This is where projects are maintained Coral restoration, which aims to strengthen coral reefs and help corals survive. There are several ways to RecoveryHowever, often there is no unequivocal assessment of its adequacy and fruitfulness. “Over the years, we have realized that it is necessary to provide accurate criteria not only to conduct interventions, but also to monitor their effectiveness. This is because the Maldives has worked with projects Coral restoration Even with individuals who do not have specific knowledge of marine biology and the environment: most of the projects are developed by private individuals who have luxury resorts, the only form of tourism on the islands, and the personnel who work there are not only made up of marine biologists »explains Montano. “The guidelines we have established allow experts and non-experts in coral restoration to gauge the effectiveness of their interventions.” The guidelines were developed as part of the graduation thesis for Federica Siena, co-author of the guide, and thanks to a collaboration with the Maldives Marine Research Institute, a research center in the Maldives. The proposed type of monitoring is adaptive: after the reef develops step by step after the restoration intervention, it is also possible to adjust the shot if something is not working. “By measuring in the same way that projects are implemented with different technologies and in different places in the Maldives, one can assess the cumulative impact Recovery over the entire system. Certain environmental indicators must be compulsorily measured by all projects. In the case of cultured and cultivated species, coral growth rate, survival rate, and presence of symbionts are monitored, if the corals show stress or disease. This allows, for example, to understand what strategies to adopt if the technology is not working on a particular atoll. Then there are optional biomarkers, which are very important for understanding whether we are on the right track, but not essential to identifying a change in the current project » explains Montano.

Coral reefs lose their beautiful colors and above all their essential richness of life and diversity. according to Sixth report on the state of the world’s coral reefsProduced in 2020 from Global Coral Reef Monitoring Network, An international partnership bringing together major coral research centers, between 2009 and 2018 we lost 14% of coral reefs, which in proportions is equivalent to the disappearance of all Australian coral reefs. This is due to frequent waves of bleaching, which do not give the corals enough time to recover naturally. Moreover, local stresses (eg coastal development and the consequent increase in pollutants) put pressure on the resilience of coral reefs. The outlook for the future is not rosy: second Study published in 2021Not only has coral growth slowed steadily since the 1960s, but if sea acidification and warming cannot be slowed, by 2054 coral could literally melt. A positive sign comes from Southeast Asia, where in 2019 a clear revival of barriers was observed: the higher biodiversity of the species confers greater resistance and better adaptability. Study conducted in Hawaii Instead, it reveals that corals living in cleaner waters are able to resist and react faster to the heat waves that cause bleaching.

This is why human intervention is so important in restoration practices, along with continuous and standardized monitoring of the health status of obstacles, effectiveness of interventions and, above all, policies to mitigate human impacts. Simon Montano comments, “A true restoration is a kind of utopia, but in the right order of magnitude it is possible to do so.” “Recovery It would mean bringing the disturbed ecosystem back to its exact original conditions. This is not possible because any form of disruption, especially those related to global warming, will not stop over time, but will continue to affect the Coral reefs. So the future exists Rehabilitation: Even if we can’t rebuild exactly what was there before, we can get it back functionally. To give an example: It is not possible to return all types that existed before an event bleaching, because some will never again find the environmental conditions that will allow them to survive, but it is more appropriate to plant species that can survive and resist under current and future conditions. This allows ecosystem functions and all associated ecosystem services to be re-established, enough to allow them to exist and resist as long as threat mitigation policies, whatever they may be, are in place. The stresses of global warming are there and should certainly be addressed, but it should not become an excuse not to act on local stressors that amplify the impact and weaken reefs.”

READ  On a journey to discover derivatives with Dr. Viviana Palumberi - Savonanews.it