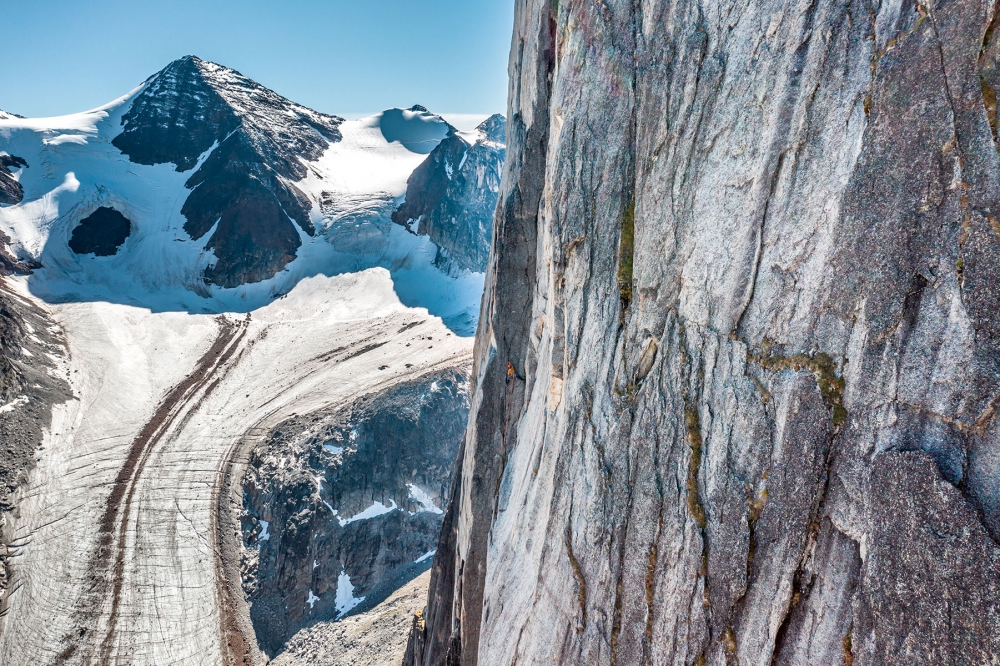 Also, tell me about Vampire Spears. How did you get to these vampire spiers?
I was exploring the unexplored frontiers of northern Canada, and the Cirque of the Mountaineers naturally came to mind. After reading various reports in the American Alpine Journal, I realized that many groups have visited the Cirque, but without the extra budget to take a helicopter to visit the lesser-known surrounding areas, climb the classic 5.10 at Lotus Tower. Congregating at the base camp at Fairy Meadows, there may be 5 expeditions on the same route at once.

During further research, I found some reports written by Pat Goodman, who made more than 10 trips to this area, first to Cirqueville and then several trips to Vampire Spheres. He has provided good information about the massif. The name itself – Vampire Spears – sounded enigmatic, yet some virgin targets were visible in its photographs and satellite images, so this project was born. Also, I discovered by infamous pilot Warren LaFave that Vampire Lake can be accessed by seaplane, so a private helicopter is not necessary.

READ  Will Canada replace Russia in potash exports for fertilizers?

So what did you expect?
Terrible weather! I read reports by Pat and others who spent time and money on the Yukon trip and came home without a single day of climbing. In my mind, if we can climb anything, anything, we should consider ourselves lucky.

Instead, as soon as you arrived, you fled to Dracula’s east side. A bivouac, then the summit. Fast and light.
Yes, we started our way in the midst of a storm, the long journey north was driving us crazy, we couldn’t wait to climb the wall at any cost, we wanted a good day to be good. We cleared the first pitches up to a large ledge at the base of the headwall where the real climbing began. Then we saw good weather coming in, spent a night on shore, climbed the face during the day and returned to base camp the same evening. This “yellow diamond” on the east face of Mount Dracula was our main objective, and after reading about other expeditions and bad luck with the weather, we couldn’t believe we’d reached our destination after our first four days!

You celebrated by witnessing the wonder of northern lights…
We were told by the locals that we wouldn’t see the northern lights this time of year, which I read a lot about during my pre-trip research. As we made our way back to base camp, giant beams of green lights began to shine across the horizon, sharpening, twisting, and illuminating the entire valley. The next day we woke up feeling hopeless; Could we have really been that lucky? Not only did we manage to climb our route, but we also witnessed the most amazing natural phenomenon we’ve ever seen.

Then came a new route up the south face of the same mountain
After a few days of rest and rain at base camp, we looked at the surrounding walls and found a line on the “Bela Lugosi Wall” that Pat had climbed a few years ago. The rock looked solid with less vegetation than “Yellow Diamond” and we easily descended the south ridge and climbed fast and light. The rock was stellar and we followed a single crack pattern to climb, like a cluster of large quartz ‘bumps’. Also, when the crack became blind, there were always holds and supports on the wall.

Two beautiful new trails. Another one keeps coming, right?
Our last ascent was in the valley, Dawn Mist Mountain, an amazing granite grind that you fly over as you approach Vampire Lake. The south face is completely vertical and has a very “alpine” feel. Pure white granite, devoid of any vegetation, was enough to convince us to move the tents above the nearest glacier and make the final climb. Mt. Dawn Mist 3 has very attractive pillars, separated by continuous crack formations from fingers to width. The summit tower seemed to offer the longest climbs, and a steep pillar in the center of the wall was cut by a monolith that seemed passable in a day. Completely blinded by the thick cloud that had settled over the valley, thanks to the photos we had taken, we crossed the glacier and set off at dawn. A pile of rubbish marked the start of our route. Despite not being able to see the following pitches, we followed our instincts and progressed slowly, staying in the fastball formation we had photographed the day before. At half distance a southerly wind blew away the cloud and revealed our incredible position on the pole. It was a much needed energy boost at that time, so we moved along the summit ridge to reach the summit at sunset.

READ  Farewell to the Canadian-American Oil Pipeline after Python's shutdown

That’s good to hear. different?
When it didn’t rain too much we spent our free days reading and bouldering. We also made a short trail, 3 pitches up to Tail Feather Ridge, a beautiful black granite peak that we nicknamed Pluma de Condor – Condor’s Feather. We worked and cleared the first pitch on the slab and then reached the 60 meter long dichotomy, a kind of curved crack leading to the top of the feather-shaped pillar.

Everything looks so perfect Sep! How would you rate this trip?
The trip was incredible, we saw caribou, bears, mountain goats, northern lights, wild glaciers and great walls…let’s just say it was more than we expected. It should be added that the flight was dangerous and only Warren LaFave could pass a seaplane through the narrow gorge and land on that small alpine lake. After he landed with us the first day, he decided he wouldn’t fly there anymore, but I think he might be convinced if someone appealed to his adventurous and chivalrous nature… Maybe set up base camp at Vampire Lake, but to explore a bit further, set up base camp below the Yellow Diamond Wall. , in two days we hauled our gear downriver for a few hours. Many lines are untouched and interested can contact me anytime for consultation. We feel very fortunate for the experience we had in the Northwest Territories/Yukon. It was amazing.