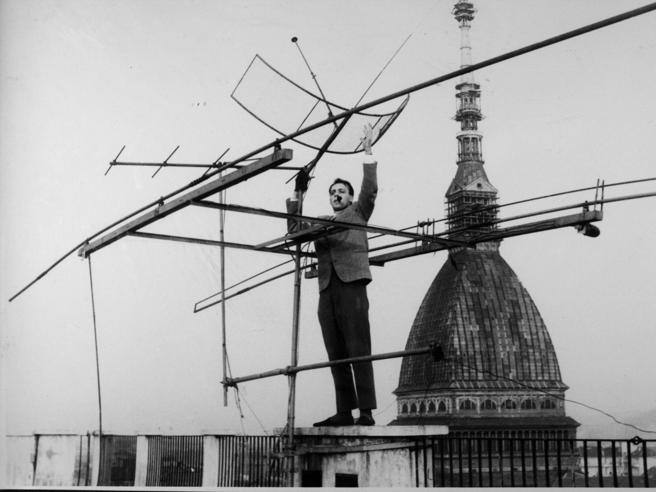 In 1954, the Gudica Cordiglia brothers, young radio amateurs, set up their antennas on a balcony on Accademia Albertina Avenue. From there they pick up messages and calls

There’s the history, which has a capital S, and then there are the stories, the private stories that involve ordinary people chasing dreams and emotions. History and stories always parallel but sometimes they can happen to meet. as in the case of Judica Cordiglia Brothers
who, from their balcony at the foot of the Mole, managed to take a leading role in the space race between the USA and the Soviet Union. It all starts with a visit to the home of a family friend, an amateur radio engineer. Achilles and Giovanni Battista, who were then two young children, were fascinated by this magical device that he could not only receive, but also communicate with the rest of the world. And so began their passion, which began with transmission in Morse code. Using the file of their grandfather’s car, they were able to communicate with their grandmother across the street. In those years they lived in Arba and the next step was to build the first radio station with the help of instrumentation and electrician in the city.

In 1954, they moved to Turin and young radio amateurs placed their antennas on a balcony in the Via Accademia Albertina.. But the space adventure began on October 4, 1957 when the Soviet Union announced that it had launched Sputnik, the first artificial satellite to be sent into orbit around Earth, into space. The two high school students communicate on satellite broadcast frequencies, perhaps the first of its kind in Europe, that they are able to hear. The space race has just begun, and from that moment on, the USA and the Soviet Union frantically exchanged launches of artificial satellites..
Intercepting those missions became the reason why the Turin brothers, who had spent their days and nights on the radio from that moment on, had been searching for signals from space. They are assisted by their sister, Maria Theresa, who is learning Russian to help them with translation.

They intercept the heart and breath of Laika, the first dog in space, and the voice of Görg Gagarin. Radio amateurs believe that Gagarin wasn’t actually the first man in space, but that he was the first to come back alive. In November 1960, they acquired SOS and on February 2, 1961, two months before Gagarin’s flight, they intercepted a labored human breath and a weary heartbeat coming from space. After the remarkable feat of the Russian cosmonaut, on May 23, 1961, the brothers heard another mysterious signal in the ether, which is not reflected in the official history. They record panting sounds in Russian saying: I’m hot, I’m hot! I see a torch! Are you going to break me? Some missions were announced by the two Cold War superpowers but others were not.

One day, the two brothers discover a signal that allows them to predict Soviet launches. Among the sounds captured there are musical notes. Mother, who graduated from the conservatory, recognizes in that melody cut from Mussorgsky, a well-known Russian composer. They believe that this piece is the signal that the Soviets send to the various bases to announce the launch of a new satellite. Thus, the announcement of new assignments began in the newspapers and did not go unnoticed. Several months later, a Russian man claiming to be a TASS reporter came to the door of their house, interested in interviewing the two boys. But soon after, an Italian counterintelligence agent also arrived, warning radio amateurs. This fake reporter is actually an undercover agent.

The two brothers’ businesses find space in the newspapers and the balcony is no longer enough to house all the antennas and equipment. So they decided to move to Torre Burt, in an old German shelter on the Turin Hill. Torre Bert, the space radio’s listening hub, is crowded with friends, relatives and journalists during launches. On the occasion of the flight of John Glenn, the first American astronaut to fly in Earth orbit, the American ambassador was also invited. Then, in 1963, thanks to participation in the Mike Bongiorno TV show The Fair of Dreams, the two won a trip to the United States to visit NASA. They packed their magnetic tapes and US officials find it hard to believe that two amateurs could have intercepted all those missions.

READ  The Magi and the Star. Questions of science and those of faith

On July 21, 1969, when Neil Armstrong set foot on the moon, their interest in space began to wane.. The images transmitted by television no longer leave room for the imagination, no longer dream of distant worlds, and now they can be seen. It can be said that the space mission of the Giudica Cordiglia brothers is over. But this story has a conclusion, Massimiliano, son of John the Baptist, recalls: In 2008, my father received a letter from a counter-espionage agent who had warned them years earlier. The letter made it clear that the Soviets wanted to make them disappear, but participating in Mike Bonjorno’s broadcast made them so well known that the operation would have caused a lot of uproar.

If you want to stay up to date with the news of Turin and Piedmont, subscribe for free to the Corriere Turin newsletter. Every day it arrives directly in your inbox at 7 am. its enough click here