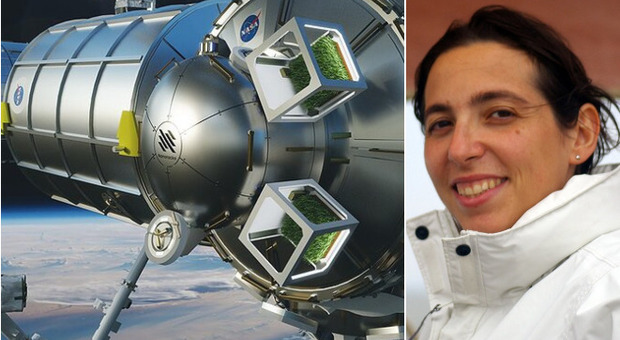 Veronica La Regina, 45, from San Rovo (Salerno), is the Managing Director of Turin-based NanoRacks Europe which aims to allow companies and organizations to carry out the production of materials and experiments in space at fixed prices. More competitive thanks. Also to the Special Platform Laboratories on the International Space Station where Samantha Cristoforetti will return as commander in the spring. He recently participated in Turin at the conference “Energy, Space and Innovation: The Central Role of Space-Related Applications in Green Challenges”, organized by the Amaldi Foundation, Fante Group and Turin Polytechnic. There The Edoardo Amaldi Foundation (FEA) is the new Italian model for applied research, technology transfer, promotion and support of the national scientific heritage. Founded in 2017 by the will of the Italian Space Agency (ASI) and the Hypatia Research Consortium, it aims to offer a new way of interpreting applied science.

Jeff Bezos, owner of Amazon, and above all aerospace company Blue Origin, says he wants to get factories into orbit so they don’t pollute the Earth anymore and also to produce materials that aren’t always possible to produce on Earth, but are you at NanoRacks already doing that?
“Yes. And for several years now: are structures installed on the International Space Station which, although small in size at the moment, can be compared to places of production and experimentation – Veronica La Regina, from Campania answers with training ranging from a law degree from Lewis to studies and masters in economics, international relations and engineering at Siwi and at the universities of Tor Vergata, Sapienza, Milan, Toulouse and Boston, including a long experience in Climate Kic, the public-private community that It deals with climate change, green and clean technology innovations, training and startups The demand for these services, targeting more and more private companies, national agencies and research institutions, is growing, and NanoRacks Europe was born in 2019 to expand access to space that has hitherto been rejected by the majority of interested parties due to costs. Suppose we prefer to democratize Earth orbit landings.”

‘Democratization’ of course, so are there A/R tickets for Earth and Space that must be paid?
“Yes, we are a private company, it is a commercial matter, but believe me, there is also a political and social aspect at the basis of our activities.”

READ  Because images from space to Starlink satellites are important

In fact, the founder of NanoRacks, in the United States, is the brilliant American Jeffrey Manber, among the first since the eighties to identify commercial opportunities for individuals in space, only to achieve fame with the astronomical project of setting the former United States. The rivals of the Soviet Union and Russia agree with the historic Mir-Shuttle project described in his bestselling book “The Sale of Peace”.
“The one who was always ahead of his time: it was impossible to say ‘no’ when Nanoracks offered me the establishment of the European segment of the company in Turin which, despite the spread of the Covid virus that exploded immediately after our birth, recorded a solid successful post-pandemic business recovery: this The year, with a crew of about ten people, all very young, we are already on orders worth 2.6 million euros.”

But why is it necessary to produce in space, with all the difficulties and costs involved?
Simply because certain things cannot be produced if they are subjected to Earth’s gravity. Or, I know it sounds paradoxical, building certain things in space costs less and involves less risk than it does on Earth.”

Explain please?
Let’s take certain components for future quantum computers or equipment that will use plasma (ionized gas used, for example, for cutting or modulation) or super optical fibers. In laboratories in microgravity situations such as the International Space Station, it is possible to study phenomena and types of production that are not possible on Earth. Or it is risky and therefore expensive: for example, to produce anti-cancer drugs you sometimes have to expose cells to radiation or have to protect them from other radiation. Well, in space this problem has fewer difficulties and fewer risks for humans ».

Quantum computers and plasmas, could they be more realistic?
«Do you know Via del Campo di De Andrè? “Flowers are born from manure”? These days, an experiment is underway to produce drugs against osteoporosis, starting with Aglianico pomace.”

Iglinico? Grape type, wine?
“Yes, that is. It’s Ali Scarl’s project involving Federico II University of Naples, Mars Center, Minerva Resarch Labs and Bct Trade, as well as Mastroberardino Winery: in short, Aglianico pomace has been brought to orbit for bio-collagen treatment of osteoporosis “In space, look what happens to the astronauts. The process of weakening the bones is happening in an accelerated way because the skeleton is less stressed and therefore it is easier and faster to develop a drug that slows down the process. The experimental process expects insulin pumps to inject bio-collagen into stem cells.”

or?
« More on the ground? Bases on the Moon will be built using lunar regolith, but to power it, knead it, and power large 3D printers, large-scale experiments cannot be carried out using samples taken from the Moon or using “simulators” produced in the USA. Then the Tuscan engineer Enrico Dini discovered that it was possible to obtain from the pozzolana quarry in Bolsena a material very similar to the lunar regolith, which he called Dna-1 Regolith Simulant. After the tests on Earth, a laboratory in microgravity will be needed to study how this substance is used on the moon.”

So in these cases it’s called NanoRacks…
“Who plans everything: from an expedition to orbit with rockets and capsules from private or national companies. Which combines various functions to lower the transportation price. Which leads to the creation of robotic laboratories that can be controlled from Earth: they are “plug and play” containers, the astronaut just has to plug them into the electrical socket, then we think about all that we also installed the Bishop, the first private external platform, or a unit of 4 on the International Space Station . metricubi is suitable for hosting small laboratories or for placing small satellites into orbit (cubes), which is one of our specialties that is increasingly sought after by research institutions such as universities.”

But what is the cost of transporting one kilogram of material into orbit, for example, and returning it to Earth? Why do prices fluctuate so much, from $6000 to $40 thousand?

“In fact, these are calculations that cannot be made in general, also because they are subject to the will of national agencies such as NASA. Then a lot depends on transportation: if more shipments are combined into one launch, then obviously the price for an individual customer goes down. But I repeat no It is necessary to look at each case individually.”

READ  Spazio Argento from January 1 all over Trentino

And after the space station, which one will remain in service for at most another ten years?
“In the meantime, some ISS units will be able to give life to a station, then the Cislunar Lunar Gateway and the lunar bases will arrive and also Nanoracks are planning a space station to orbit around them.

Why space?
“I’ve always loved sailing, an environment that takes you to look at the stars, not just orientate yourself. Then I was assigned to Telespazio and there the universe began to open up before me. And every new mission, in the European and Italian Space Agency, especially in the space exploration sector, and every new collaboration with scientists and astronauts, has increased the charm of these activities that each time ask you to give up your comfort zones to enter into a new adventure. Scenarios are also often invented. Going to space as a tourist in Earth orbit? Not at the moment, it’s still too expensive, and then, if I can choose, I’d prefer a target for the moon.”

She worked everywhere, missing only the North Pole and the Antarctic, but then returned to Italy where the airlines are at the fore.
“True, very true, and I am proud of that, but at the same time competition has increased not only with great powers such as China, with which NanoRacks is already cooperating, and India. New products such as Bulgaria and Lithuania are also growing in this sector. I mean Italian companies, even companies Historically, it must be bolder to stay ahead of the curve with initiatives that are not only associated with the big space agencies that ensure the comfort zone mentioned above and that instead it is necessary to leave in order to grow.”

Some members of Europe’s Nanoracks in “away”: from left, A. Zabatta, D. Antonucci, A. Aiello, Veronica La Regina, G.G. Cerrato, C. Salvaguardia.