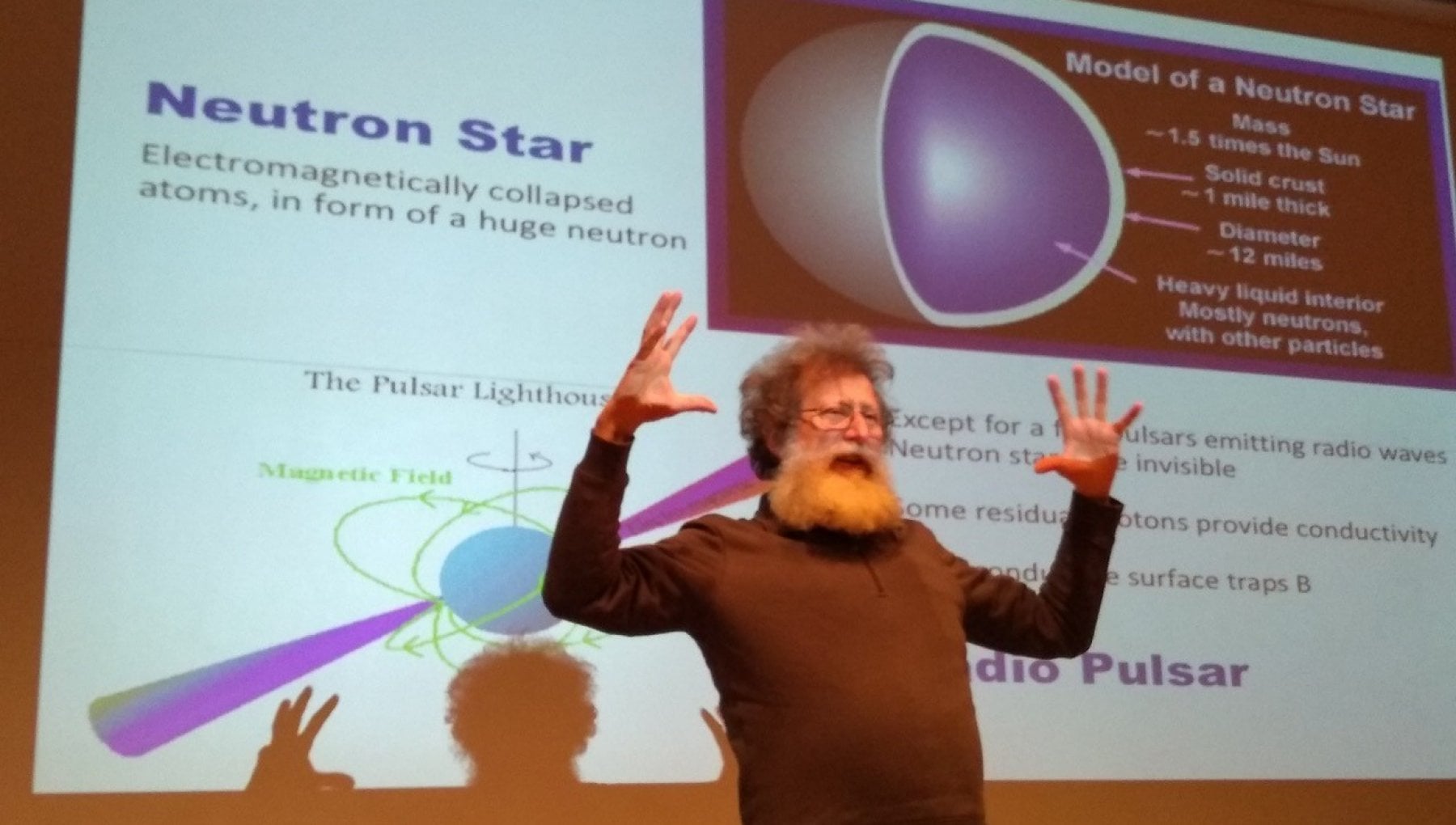 “We will operate the first fourth-generation nuclear fission reactor in Canada in 2026, at Sag River, and the second at the Urbana-Champaign University campus in Illinois. After that, we will start producing one reactor a month. We will be pioneers everywhere. The world of fourth-generation nuclear reactors will provide safe and zero-emission energy. “. Ricardo DiSalvo He is considered “a great inventor” by his own physical colleagues, who have known him since he worked on elementary particles at CERN in Geneva and the Atomic Research Laboratories at Cornell University in the US. Then an attempt to return to Italy led him to overcome the waves of gravity. “But Italy didn’t want me” and had to continue work on gravitational waves at the California Institute of Technology. “Finally, people at Facebook sought me out, and for that I ran two labs, one in Benevento, and filed 22 patents,” he says.

More recently, the discharge caused by nuclear fission. “It’s a passion born out of family dinners,” DiSalvo explains. “My partner Francesco Venneri, a former physicist at Los Alamos Laboratories, founded a company many years ago to develop fourth-generation reactors. At the beginning I was skeptical, and at every meeting I subjected him to a barrage of technical questions. , convinced that I had discovered the weak point of the project. I did not succeed”. Today Riccardo DiSalvo is a senior consultant at the Venneri-based Ultra Safe Nuclear Corporation, promoting it in Italy to companies and private companies that need more energy at a more competitive price than gas.

Professor DiSalvo, we have been talking about fourth generation nuclear power for years. Skeptics say: Show us a prototype that works, and then we’ll talk about it again.
“In 2026, they will see a real reactor working, not a prototype. Next year a second one will start on the campus of the University of Urbana-Champaign in Illinois. After a while we will start installing them in Europe as well. Practices have already started with large European companies ”

You are not alone in this race for the fourth generation, for example there are projects by Bill Gates or In Nucleo by Stefano Buono. Why do you consider yourselves trailblazers?
“Because we’ll start much earlier. The most optimistic start date for other projects is 2035, and we’ll be ready in four years. Ours are small reactors, say 50 megawatt thermal reactors at most, and I know everything else. Fourth-generation reactors are hundreds of megawatt machines born in power plants. .yet our program has the strength to be intrinsically safe. Even if we do everything possible to do damage, it cannot cause a nuclear accident.

How did you achieve this “perfect” security?
“Thanks to the materials and design of the reactor. Two key points: all the material is unmeltable ceramic and then the inherent property of uranium 238 to absorb more neutrons if the temperature is increased. The fission material, uranium oxide, is produced. In the form of beads about a millimeter in diameter, graphite and silicon carbide. Covered in a double layer of, an indestructible material, as hard as diamond. These hundreds of beads are then placed in bullets 2 cm in diameter and 5 in height. Silicon carbide. And silicon carbide is deposited throughout, resulting in a single and indestructible block “.

With what benefits?
“The embryo cannot be melted. The first part of the reactor is uranium oxide that can be melted, but it must be above 2300 degrees, which does not happen naturally, because as the temperature increases, the absorption of neutrons increases. Uranium 238 quenches the reaction. Even if there is an anomaly, the maximum temperature of these reactors will cause damage. The limit is below 1000 degrees. Body melting is impossible. Another advantage of silicon carbide beads is the saving of fuel that is traditionally consumed. To recover spent fuel, furnaces must chemically dissolve zirconium steel rods to separate the fissile compounds, and then carry out a ceramization process before sending the waste to warehouses. Hard and Expensive process. Here it is enough to restore ceramics. Cylinders of silicon carbide, a material that lasts for more than 200 thousand years required for radioactivity, the activity of plutonium is lower than that of natural uranium. and Finally, it is impossible to separate the plutonium in the silicon carbide beads, which prevents it from being used to make nuclear bombs.

Speaking of weapons, nuclear power plants have become a target in Ukraine. What happens if a missile hits your reactor?
“Our reactors are not an easy target, because they are installed six meters deep in a 25 square meter trench, and they are very small: the core is three meters high and two in diameter. It can be transported by truck. But even if a reactor is completely cored, fission inside the indestructible cylinders of silicon carbide The material will remain: Collect them within the radius of the explosion.There will be no spread of radioactivity in soil or air.

And the water? In some cases, reactor cooling water has been contaminated with radiation.
“The cooling in our reactors is by helium. Dewatering means that if the temperature rises too much (above 600-700 degrees) to avoid explosions due to excess vapor pressure and hydrogen is formed. An explosive gas in contact with oxygen “.

What is the risk of temperature?
“We design nuclear reactors to work at 700 degrees. As the temperature rises, they stop producing significant power. And when they get above 1100 degrees, they shut down completely. So, even if one is guilty of turning off the cooling, remove. Bars, Do everything you shouldn’t, the reactor will only go to 1100 degrees. But, as mentioned, the first melt is 2300, so there’s a safety margin of over a thousand degrees. Our reactors are inherently ultra-safe.”

Who are the buyers of these reactors?
“This project was born to solve a problem in Canada: there are mines in the Arctic Circle area that need energy. So far they have been operated by long caravans of tankers carrying fossil fuels. The idea was to make them autonomous with small reactors. But the energy crisis has made this solution interesting for many companies behind their houses. It made us understand. Some time ago, with gas at 20 euros per megawatt hour, it would not have been competitive to supply our fission energy at 30 euros per megawatt hour … but now many people are asking us for information. In recent days I have been talking to Italian entrepreneurs working in the paper, ceramic and cement sectors. Met … For them, the cost of 30 euros per megawatt hour is 10 euros per megawatt hour after 7-20 years of uninterrupted operation, with a second refueling. decreases.

Who will manage the reactors once they are installed in the institutions?
“Ultra Safe Nuclear Corporation. Due to their design and small size, they require little maintenance. We have “regional” control rooms, controlled by local personnel trained by us to monitor groups of 10-20 reactors in the same area. Chess in the province of Rome, for example”.

READ  Many people were without internet in Canada on Friday

Can’t imagine the use of electricity for power generation?
“Sure. Furnaces generate heat, and you can do whatever you want with that heat: for industrial processing, like ceramics, or to boil water and run a turbine to generate electricity. 10 series of our small 45 MW thermal furnaces have the equivalent power output of a 150-200 MW power plant. .You can use existing power plants and run turbines using coal or gas burners.Intensive companies use excess heat to connect electricity, and for district heating of neighboring houses.

Did you discuss all this with Italian politics?
“I have discussed the majority of the new government with Minister Cingolani and Senator Manfredi. I will be back in office and operational in December”.

Italians are deeply distrustful of nuclear power. How do you plan to win it?
“I can only reiterate that we will produce energy in a super-safe way and without emitting CO.2. If you want to protect the landscape, for example the green hills around En Siena, and you don’t want to cover them with photovoltaic panels, it might be worth putting these furnaces. But I am optimistic because I see that young people, even in Italy, are starting to have a very different attitude towards nuclear power.

What gives you the assurance that in 2026 everything will happen as your formulas say?
“Two innovations in recent years have allowed us to move forward. The first is 3D printing, which allows you to make bullets in silicon carbide. The second is software that makes simulations more and more reliable. And I assure you. Simulating the flight of a new aircraft is much more complicated than the behavior of a fourth-generation nuclear reactor: in short , we know how things will turn out”.

But the first, which will debut in Canada in three years, is it still a means or something concrete?
“They finish at the Sag RiverEnvironmental assessment Site and work on the reactor will begin next year. Usnc has already started producing the fuel at its factories in Tennessee and Utah. I repeat, from 2027 we will be ready to produce more than ten reactors per year, but to build many more it is necessary to build factories in Europe as well.