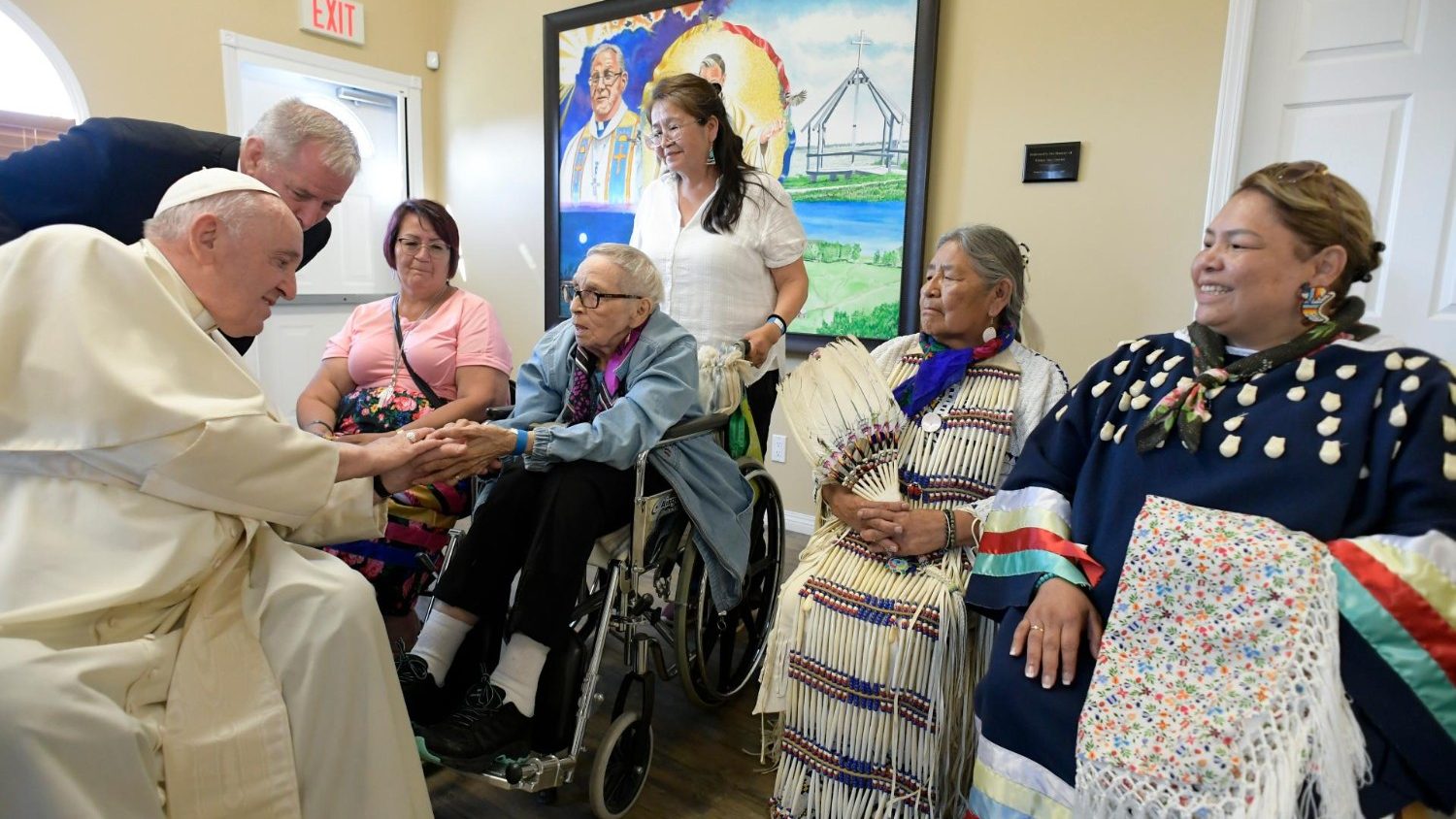 Hope to spread in a gentle way and memory to heal without forgetting. Vittorio Scelso of the Dicastery for the Laity, Family and Life commented on two new features the Pope has addressed in Canada on the elderly, ancestors, grandmothers and great-grandparents. Words that take on a different meaning in the context of residential schools and the imposed past

In Canada, Francesco Pilgrim leaves a lot of space in his speeches for grandparents, grandmothers, or again, as he reiterated to journalists on a flight to Edmonton last Sunday, as he assured indigenous representatives in Rome. On Tuesday, S. Discourse at Lake Anna to Kokum, a tribe that nurtures, loves and spreads faith. LEITMOTIVE: If one thinks that the relationship with the youth and the giving of branches and fruits related to the roots to be preserved, even today in general, enriches the papal magisterium on the already rich with new aspects. Dedicated to them. Purpose of prayer July and if we think news For the world day that has just passed, or for the cycle of catechesis dedicated to them that the papacy will resume in August. He is sure of it Vittorio Scelo Pastoral Care of the Elderly Responsible for the Dicastery for the Laity, Family and Life:

Always a rich read of the teachings of grandparents and elders. What are your thoughts on this phase of Francis’ penitential pilgrimage to Canada?

At Commonwealth Stadium in Edmonton, Francis celebrated Mass in front of about 50,000 people on the Feast Day of St. Anne, commemorating the importance of grandparents, “roots” …

In fact, there is something new in this trip to Canada, this discourse in a gentle way, a discourse about a faith transmitted in the way of the Holy Mother, as the Pope said yesterday, or the Virgin of Guadalupe, there is something remarkable about it. It reminded me of that time when the Pope said that faith spreads by attraction, not by conversion. In fact these are the words spoken at Lake St. Anna in Canada, which take on a certain significance in the context of this penitential pilgrimage. They are actually quite new. It is also clear here that the Pope reiterates that we have something to learn from the elderly. There is something deeper, conveying faith in a gentle way seems to me to be the most important aspect of this journey.

Another remarkable phrase the Pope uttered yesterday during his Mass in Edmonton. He said that Joachim and Anna loved Mary as Mary loved Jesus with an unquenchable love…

Of course the phrase must be read against the background of what the Pope is apologizing for: it releases a love, certainly a declaration, of cultural imposition that has occurred in Canada for more than a century, certainly not a declaration. It freed the tribal people, but did not liberate them. The Pope proposes something different, gentler, kinder, which enables generativity – a word the Pope uses often – a love that enables us to give birth to something new. There is a social and ecclesiastical value in this: for Francis the elderly help others to grow through their tenderness, their frailty, their frailty. This Magisterium and these words of Francis are new and take on a particular relevance when spoken in Canada and in a penitential context.

Francis participates with the natives in the pilgrimage to Lac Stay Anne, where he celebrates the Liturgy of the Word. On the shores of this holy place, the Pope asks …

Another aspect that the Pope reiterates and did in Canada is the relationship that must be with the elderly and the past, giving life: “vertical” – from the roots to the branches – and not “horizontal”, the “backward position” does not hold. Is there anything new in this sense as well?

No nostalgia for this era: the old don’t teach the young to go back. The sap that allows the old to thrive the young. In this sense, the connection he insists on, between roots and flowering, is particularly significant. Like I said, it’s a love, it’s a love that doesn’t hold back, it’s a love that helps you let the possibilities unfold. It contains the Pope’s speech yesterday on the culture of waste. What he said at Lake Sant’Anna that we have to start with the poor, we have to start with the neighborhoods to change our society really impressed me. If we want to care for and heal the lives of our communities, we can only start with the poor, the most disadvantaged. Then he spoke of the last cry. “Don’t leave us alone” is the cry of the elderly dying alone in a house or abandoned in a structure, or the distressed patients who are offered death instead of affection. That is, roots have this focus to interact with other plants. Otherwise these roots will dry up and not bear fruit. But when he talks about these structures where the elderly are at risk of being abandoned and abandoned – the Canadian bishops’ conference was very hard on how the elderly were treated during the Covid era and how they were treated within the structures. The death of many old people has produced – the structures in which the indigenous people lived and the reason for this journey also come to mind. In this sense there is a ‘danger of structures’, a way of closure, a way of caging roots, but caging roots also means caging branches.

READ  "Once again Canada is sending us home. This is the third time."

The Dicastery for the Laity, Family and Life has announced the theme chosen by the Pope for the second day, which falls on Sunday, July 24, and how to remember grandparents and the elderly …

Another thing that seems to me very important in today’s choices – according to the Pope – is to ask ourselves what they would do in our place as wise adults. A bit trivial in today’s world.

Rightly, the problem is to take seriously the great lessons from the elders and the Pope on this journey, rightly, he gave this speech about the ancestors, the spreading faith and the feeling of being a part of history. He speaks of a “wonder” from history before us, which is beautiful; Yet we are children of history to be preserved and craftsmen of history to be built. There is a sense of history. History is about evangelizing the lives we live. It makes sense if the Gospel lives in history: St. John Paul II emphasized a lot about the relationship between the Gospel and culture, in order to reveal all its potential. But there is a connection between the appreciation of elders and ancestors that the gospel speaks to history and the understanding that Christianity emerges from history and must change history, and this is something derived from respect and attention. What adults have to tell us. New generations of Christians understand that they are part of a long history, that there is a plan of God to be grasped, and that there are great ideals that our ancestors or parents or grandparents lived by. I always think, for me as a European, it’s important to understand what peacebuilding in Europe means to older people in the country where I live. In Canada, I believe there is this theme of faith and this gentle exchange of remembrance, to heal with presence, not to forget, to heal without oblivion, to heal without judging, but to heal.