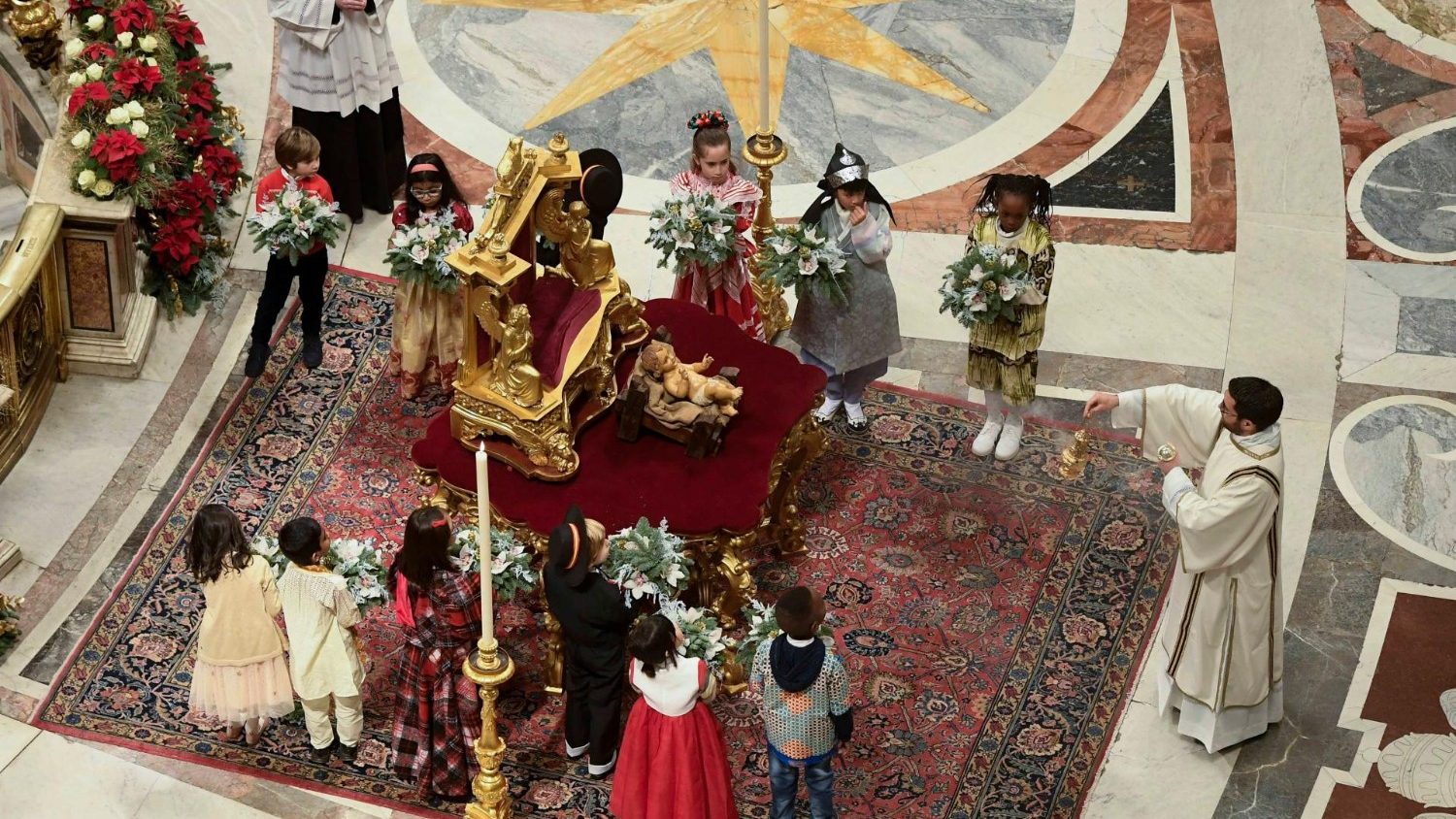 In his homily at Mass on Christmas Eve, the Pope invites us to look into the manger in which Jesus was born, to revive trust in his closeness, charity towards the less, and hope “in those who have lost it” by “doing good”. He denounced that men, “hungry for power and money, also eat their neighbors, their brothers” in wars

To “rediscover the meaning of Christmas” we look at Jesus lying in the manger: a small being, but the sign “by which Christ enters the world”. And who tells us that at Christmas “God is near, may trust be reborn”, God is poor, for this “love is reborn” and finally God is tangible, and “in His name we make a little hope reborn in those who have lost!” . Inspired by the manger of Bethlehem, Pope Francis, in his homily Mass on Christmas Eve, to explain to us what God wants to tell us on this holy night. A manger like that on which the statue of the baby Jesus was placed, was uncovered by the deacon after the singing of the Kalinda, before the commencement of the ceremony.

To rediscover the meaning of Christmas, let’s take a look at the manger

Luke mentions her in his Gospel on the Nativity three times, as the Pope affirms: with Mary, who places Jesus “in a manger”; then the angels announcing to the shepherds “a child wrapped in swaddling clothes and lying in a manger”; Then the shepherds, who find “the baby lying in the manger.” About Bethlehem “a situation similar to ours: everyone is busy and preoccupied with an important event to be celebrated, the great census, which required much preparation. In this sense, the climate at that time was similar to that which surrounds us today at Christmas.”

“The Manger: To rediscover the meaning of Christmas you have to look there. But why is the manger important? Because it is the non-random sign by which Christ enters the world. It is the statement with which He presents Himself, the way God is born into history to make history reborn” .

The Pope during the Mass on Christmas Eve

God speaks to us in the manger about closeness, poverty, and materialism

Francis explains that through the manger God wants to tell us “at least three things: proximityAnd the poverty And the realism. Proximity, above all, because “the manger serves to bring food closer to the mouth and to consume it more quickly.” Thus it can symbolize “gluttonous eating”: men, even today, hungry for power and money, also consume their neighbours, brothers and sisters. How many wars! How many places until today are dignity and freedom trampled! And the main victims of human gluttony are always the weak and powerless.

READ  “I warned you about Putin. He is never the one who starts negotiating »- Corriere.it

Even on this Christmas, humanity insatiable with money, power and pleasure does not make room, as it was for Jesus, for the little ones, for the many unborn children, the poor, the forgotten. I think above all of the children devoured by war, poverty and injustice. But Jesus comes there, a baby in a manger growling and rejecting. In him, the son of Bethlehem, every child. There is an invitation to look at life, politics and history through the eyes of children.

In the Sala Marconi in Palazzo Pio, the usual briefing on the worldwide broadcast of the Christmas festivities, in particular the night’s mass and the message …

Courage, may God make you reborn “where you thought you would hit rock bottom”

In the manger of “Rejection and Inconvenience,” the Pontiff continues, there is the problem of humanity: “the indifference generated by the fierce haste of appropriation and consumption.” Christ was born there and in that manger “we discover Him in the vicinity”, He comes “where He devours food and becomes our food.” God in Jesus “makes us His children and nourishes us with tenderness. He comes to touch our hearts and tells us that the only force that changes the course of history is love. It does not remain distant and powerful, but becomes close and humble.” He approaches, Pope Francis explains, “because he cares about you.” He says to you from the manger: “If you feel consumed by events, if your sense of guilt and inadequacy devours you, if you hunger for justice, God is with you. I know what you are living through, I experienced it in that manger. I know your tragedies and your history. I was born to tell you that I Close to you and I will always be.”

“Courage, don’t let yourself be overcome by fear, give up, discouragement. God was born in a manger to make you reborn there, where you thought you would hit rock bottom. There is no evil, there is no sin that Jesus does not want and cannot save you. Christmas means that God is near: may trust be reborn!”

The cold stable tells us that “People are the real wealth”

But the manger in Bethlehem also speaks to us povertyHe is in a cool stable, not in the heat of a hotel, the Pope continues, and Jesus was born there, surrounded only by “those who loved him: Mary, Joseph and the shepherds. All the poor, united by affection and amazement, not by riches and great possibilities”. But these, Francis comments, are “life’s real riches: not money and power, but relationships and people”. and “The first wealth is Jesus.” But do we, he asks himself, “do we want to be on his side? Do we approach him and love his poverty? Or do we prefer to remain comfortable with our own interests?”

Above all, do we visit him where he is, that is, in the poor managers of our world? There he is. And we are called to be a church that adores the poor Jesus and serves Jesus in the poor.

It really isn’t Christmas without the poor

Here the Holy Father quotes Monsignor Oscar Romero, bishop and martyr saint, in his Pastoral Letter in which he explains that: “The Church supports and blesses efforts to change the structures of injustice and sets only one condition: that redundant political transformations are in the real interest of the poor.” He then admits that it is not easy, “leaving the warmth of worldly life to embrace the naked beauty of the grotto in Bethlehem, but let us remember that it is not really Christmas without the poor.” “Brothers, sisters – Pope Francis’ Christmas appeal – God is poor: may charity be reborn!”

In view of the celebration of Christmas Eve, the Cardinal details the setting in which all the faithful of the world will personally think or live …

Jesus is looking for a faith based on worship and love, not simple talk

Finally, he continues, “The manger spoke to us realistic. Indeed, the Child in the manger presents an amazing, even stark, sight. It reminds us that God really became flesh.” Jesus, “who was born poor, will live poor and die poor — the Pope affirms — didn’t make many sermons about poverty, but lived it to the end for us.” From the manger to the cross, His love for us was palpable and palpable. : From birth to death, “He did not love us with words, He did not love us in jest!” Hence, “He is not satisfied with appearances. He just doesn’t want goodwill.”

READ  Fall Lysychansk: Lugansk region in the hands of Russia. Zelensky: "Reconstruction is the task of the entire democratic world" - live

He who was born in the manger seeks firm faith, the basis of which is worship and love, not gossip and external phenomena. The one who is naked in the manger and appears on the cross, asks us for the truth, to go to the abstract reality of things, and to put excuses, justifications, and hypocrisy at the foot of the manger.

The Child Jesus in St. Peter’s is attended by a little girl who brought the floral devotion

Let’s not let Christmas go by without doing something good.

Francis concludes that God does not want appearance, but reality. For this reason: “Let us not let Christmas pass without doing something good. Since it is his party, his birthday, let us give him welcome gifts! At Christmas God is concrete: in his name we revive a little hope in those who have lost him!”

“Jesus, we look to you, lying in the manger. We see you so close, so close to us forever: Thank you, Lord. We see you poor, to teach us that true wealth is not in things, but in people, and especially in the poor: sorry if we don’t recognize you.” And your service in it. We see you tangible, because your love for us is tangible: Jesus, help us to give body and life to our faith. Amen”

Prayer in Arabic for those responsible for “renouncing violence”

In the five prayers of the faithful, with those in Chinese, French, Portuguese and Malayalam, the invocation in Arabic to the “Father of all, who loves and gives peace, so that those of a political, social and scientific disposition may bestow.” Courageous economic responsibilities to renounce violence and build friendship between peoples. To bring a floral tribute to the statue of the baby Jesus, there are 12 babies from Italy, India, the Philippines, Mexico, San Salvador, Korea and Congo. Celebrated in the altar, at the Mass presided over by Pope Francis, Cardinal Dean Cardinal Giovanni Battista Ra. And at the end of the ceremony, it is the Pope himself, in a wheelchair, who takes the child to the nativity scene in the basilica, while the schola sings “Tu scendi from the stars”