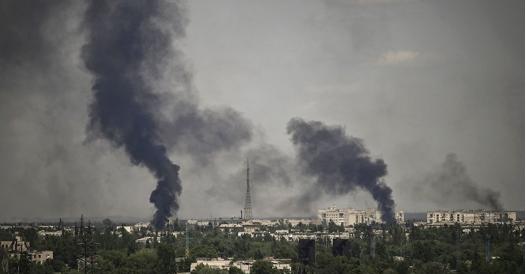 We are in the midst of a war of attrition: one day you gain a kilometer and the next you lose it. The Russians advanced on the Donbass at a slow but steady pace, but the situation suddenly changed. Some experts talk about the peak point

We are in the midst of a war of attrition: One day you gain a kilometer and the next you lose it. In the Donbass, the Russians were advancing at a slow but steady pace, they corrected part of the errors that held them back in the first stage, and at least until Friday, they seemed to take Good part of Severodonetsk. But by Saturday morning, the situation had changed dramatically: The Ukrainians launched counterattacks and claimed to have retaken part of the industrial city.

The advance of the invader slowed sharply Here and elsewhere. Heavy street-to-street fighting may also have limited Moscow’s firepower: it could be devastating in the open, but, short of distance, would leave the Ukrainians more maneuverable. In addition to Defenders in higher positions Thus they will have a point in their favour. Separatist sources add that Ukrainians will also hire foreign volunteerswell trained, while other observers talk about heavy losses between Chechnya And the Wagner company. However, it is essential that defenders be able to keep the supply route open, in order to fuel their own action.

Elastic dynamics have given rise to many explanations. American expert Trent Tlinko came to speculate that the military had reached a level Peak point, the limits of one’s abilitiesand now they will have to suspend the offensive: if the Ukrainians recapture parts of Severodonetsk, where Moscow has deployed 25 tactical battalions – Although deprivation is more than one might think – Then he says, The whole country at your fingertips. Just two days ago, the region’s governor, Sergei Gaidai, claimed that the Russians now had 70% of the city in their hands, but on the night between Friday and Saturday, this percentage dropped to 50% thanks to the counterattack.

king The type of conflict in progress calls for caution, it is too early to say that there is a positive turn in favor of Kyiv. Many proven facts have been called into question since the beginning of the invasion: it is often not easy to get an accurate picture, such as The news is mixed with propaganda and confusing signals. for a few weeks, President Zelensky reversed the novel He warned that the situation in the region is difficult, as his forces lose between 60 and 100 men per day and count hundreds of wounded. Soldiers deployed to defend Severodonetsk, with their backs to the wallto the point that the ruler Gaidai suggested a tactical withdrawal.

In short, a fall seems imminent now. Even British intelligence – always optimistic about its how-to bulletins – warned that the entire Lugansk region, already 90% owned by Russia, would be occupied by mid-June: after Severodonetsk, Moscow will only lack nearby Lyschanskon the other bank of the Siverskyi Donets, to take full control of the region.

Instead, presidential adviser Alexei Aristovich wrote, it was a trap: The Ukrainian army allegedly lured invaders into populated areas by pretending to retreat. He says the move would have replaced the Russian General Staff, which now faces an extremely dangerous task. The presidential adviser says the defenders of Ukraine are liquidating their Russian comrades, walking this fine line between reality and propaganda. On the other side Moscow responds: We opened important gaps in the enemy’s ranksup to 90% in some units.

It is impossible, at present, to determine who is telling the truth. Certainly, however, The duel highlights the strategic and symbolic importance of the city: If the Russians take it, they will be close to it Donbass edit A promise from Putin. If the Ukrainians to repel the enemyRather, it will be a victory that gives more Morality and Courage.