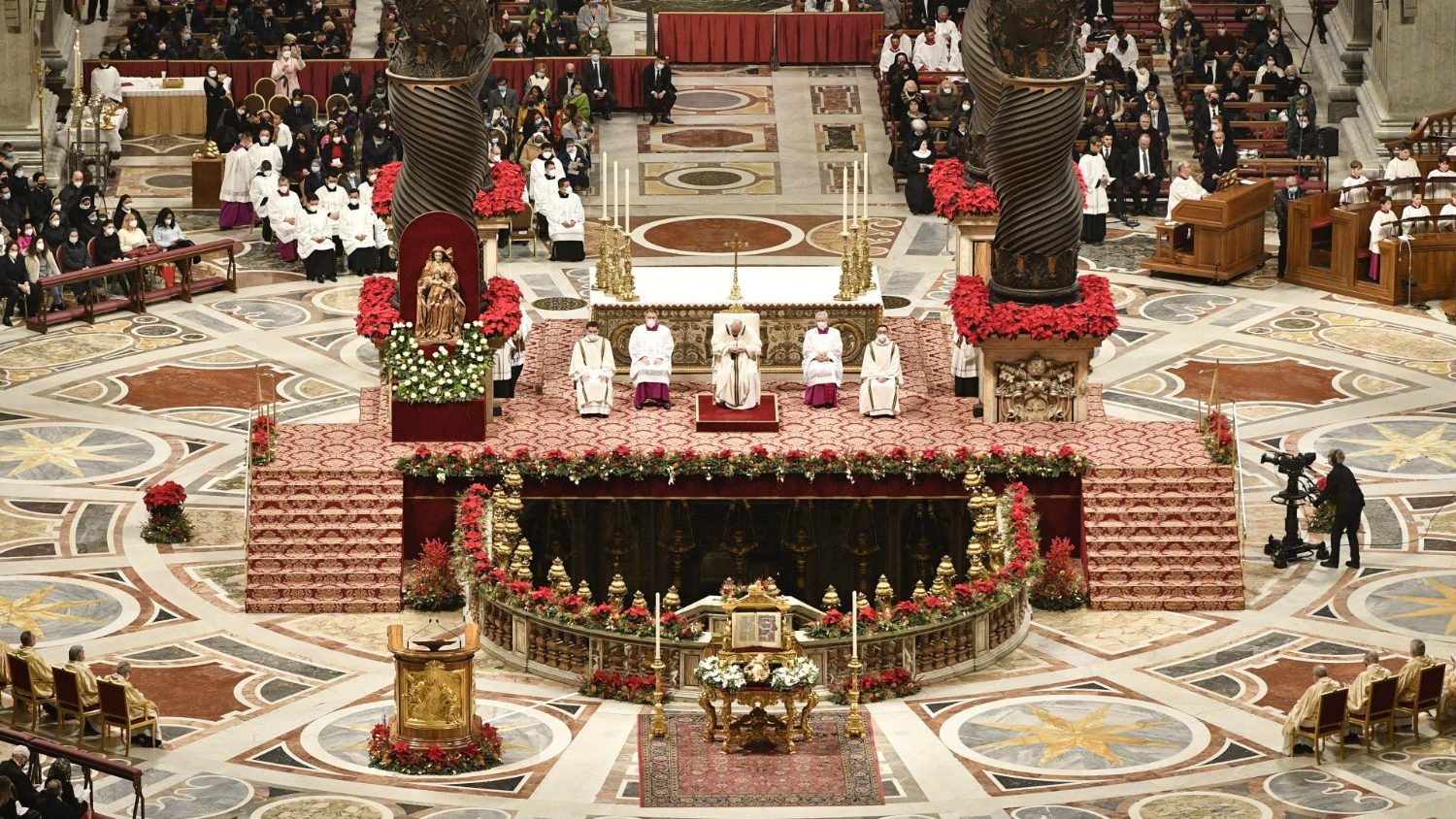 At Mass in St. Peter’s Basilica, Francis’ appeal: No more deaths at work. Thinking of the Shepherds of the Nativity, he asserts that God does not ride on greatness but rather chooses smallness to reach us, while “we seek greatness according to the world, perhaps even in His name.” Then he turned his gaze to the Magi, an invitation to simple and educated people to adhere to the synodal journey.

“Today everything has been turned upside down,” Pope Francis said in his homily Christmas Eve Mass In St. Peter’s Basilica, preceded by Singing from Kalinda: “God does not ask for strength and strength, but rather for tenderness and inner gentleness.”

God does not ride greatness, but descends to smallness. Small is the way he chooses to reach us, touch our hearts, save us, and give us back what matters. (Listen to the report in the voice of the Pope)

“God reveals himself, but men do not understand him,” says Francis, calling everyone to think deeply:

Jesus was born to serve as we spend years in pursuit of success. He makes himself small in the eyes of the world as we continue to search for greatness according to the world, perhaps even in his name. God lowers himself and we want to stand on a pedestal. The Most High indicates humility and pretending to appear. God goes in search of the shepherds and the invisible. We seek to see.

God “comes into the small world”. Her greatness presents itself in small size: This is what the Pope calls the “contradiction” that the “Gospel insists upon”:

He who embraces the universe needs to be in his arms. He who created the sun must be warmed. The tenderness itself needs to be pampered. Endless love has a little heart that makes soft beats. The eternal word is infant, that is, unable to speak. The bread of life must be fed. Creator of the homeless world.

Francesco talks about small blessing, explaining what she means concretely: “Belief that God wants to come In the little things in our life, wants to live in everyday reality, the simple gestures that we make at home, in the family, at school, at work.” A consciousness full of hope must appear: in our ordinary life God wants to accomplish extraordinary things. So the call:

READ  "It's a James Cook sailing ship." And Australia snatches the discovery from USA- Corriere.it

Let us leave behind the regret for the greatness that we do not have. We reject complaints, long faces, and greed that leaves us unsatisfied!

There is more, says the Pope: “Jesus wants to come not only in the little things in our lives, but also in our smallness: in our sense of weakness, fragility, inadequacy, perhaps even error.” The Pope recalls the message that God is leaving us on this special night:

Your smallness does not frighten me, your weaknesses do not worry me.

To all Francesco says:

Brother, brother, if you are surrounded, as in Bethlehem, by the darkness of the night, if you feel cold indifference around you, if the wounds you carry inside cry out: You don’t count too much, you are nothing, you will never be loved as you wish, God answers tonight . Tonight he says to you: I love you as you are.

At birth, Jesus was surrounded by young, poor, and shepherds who – as the Pope recalls – “were there to work, for they were poor and their lives had no schedules, but depended on the flock.”

No more deaths at work

The exact thought of Hard work and a strong call to human dignity and work:

God comes tonight to fill the hardships of work with dignity. It reminds us of how important it is to give dignity to man by work, but also to give dignity to human work, because man is a master and not a slave of work. In the day of life we ​​repeat: No more deaths at work! And let’s commit ourselves to this.

The truth should not be forgotten

Jesus was born there, near them, near the forgotten suburbs. It comes where human dignity is tested. He comes to magnify the excluded and reveals himself to them above all: not to the educated and important figures, but to the poor who worked.

“Accepting smallness – adds the Pope – still means one thing: embracing Jesus in today’s children. They are most similar to Jesus, who were born poor and “in whom he wants to be honoured.” So call for fear only:

In this night of love, one fear attacks us: to wound God’s love, to wound it by carelessly despising the poor. They are favorites of Jesus, who will one day welcome us into Heaven. A poet wrote: “He who does not find heaven here will miss it there.” Let us not lose sight of Heaven, let us take care of Jesus now, caressing Him for the needy, because He has likened them to them.

Simple and Cultural in the Collective Journey

As in the manger of Jesus, even today on the synodal journey he is called the simple and the educated. Looking from Jesus’ manger, we can glimpse I am the MagiOn pilgrimage to worship the Lord. “About Jesus – affirms Francis – that everything is united together: there are not only the last shepherds, but also the intellectuals and the rich, the wise.”

In Bethlehem, the poor and the rich coexist, those who worship like the Magi and those who work like the poor. Francis explains that “everything comes together when Jesus is at the center, but then sets out: ‘It is not our thoughts of Jesus, but He, the living.’” With a look at the Magi, he urged the pope to “return to Bethlehem”:

We look to the wise men who are lost and as a synod church, and on the way we go to Bethlehem, where God is in God in man and man; Where the Lord in the first place is worshiped. where the latter occupies the place closest to it; Where the shepherds and the magi stand together in a brotherhood stronger than any classification. May God grant us to be a poor and fraternal church of worship. This is the basis. Let’s go back to Bethlehem.

Francis suggests that “life is a pilgrimage”:

Let’s get up, let’s get up, because the light came on tonight. It is a gentle light and reminds us that in our youth we are lovable children, children of light.

READ  "Very small probability of a military victory for Kiev"

On Christmas Eve comes the light that “no one will ever put out.”

The mystery of Jesus’ coming

Pope Francis quotes the Gospel of Luke: “At night a light is lit. An angel appears, enveloping the glory of the Lord the Shepherds and finally the long-awaited proclamation for centuries arrives: “Today is born to you a Savior, who is Christ the Lord” (M 2.11). “What the angel adds is surprising,” asserts the Pope: “This is the sign for you: you will find a child wrapped in a swaddle, lying in a manger.” That’s it: “A child lives in the abject poverty of a manger. There are no more lights, radiances, and choirs of angels. Only a child.” The Pope remembers that the Gospels narrate the birth of Jesus starting with Caesar Augustus, who made a census of all the earth: it shows the first emperor in his life. size. But right after that he took us to Bethlehem, where there is nothing great: just a poor child wrapped in a swaddle, with shepherds. God is in her smallness.” It is God’s gift, and the Pope says: “Let us allow ourselves to pass this scandalous astonishment.”

The celebration was followed by media from all over the world.

After the procession, in which cardinals and bishops also participated, the Pope paused before confession and began to sing the calenda. After the singing, the basilica bells rang and the lights came on. Pope Francis unveiled a statue of the Child Jesus, infuriated him, and gave children from many parts of the world the tribute of flowers. Having blessed the Gospel, the deacons, accompanied by the master of ceremonies, brought him before confession and placed him on the throne.

At the end of the Divine Liturgy, the Pope escorted the child Jesus and went, surrounded by children with flowers, in a procession to the nativity scene of the church. The deacon placed the servants in the cradle, while the children laid flowers in the nativity place. In front of the Pieta, the Pope greeted the children.