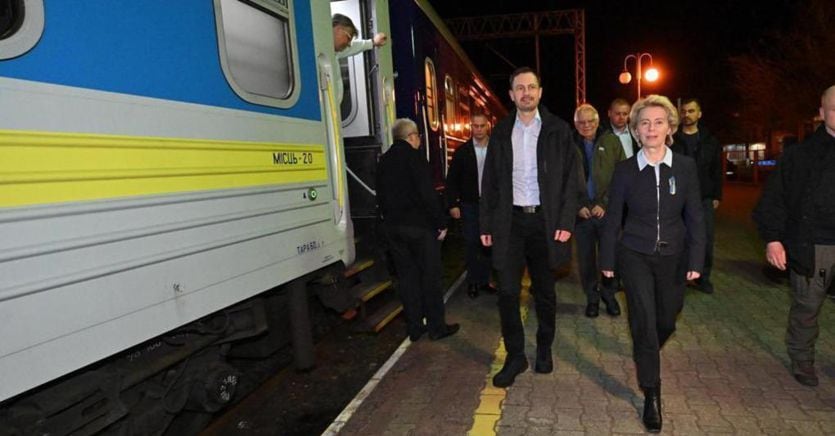 Russian missiles hit a train station in Kramatorsk in eastern Ukraine’s Donetsk region, killing more than 30 people and injuring 100 others, according to the head of Ukraine’s railway network Alexander Kamyshin. The station at these hours is used to evacuate civilians from the eastern parts of the country that are under bombardment. Moscow denies involvement in the attack and blames Kyiv: missile fragments that appeared in a video clip near the Kramatorsk station allegedly belong to the Tochka-U aircraft carrier, “used only by Ukrainian forces.” In last night’s attack on Odessa from the sea and from the Crimea, there were casualties, according to Vladislav Nazarov of the Southern Operations Command of the Ukrainian Army.

It’s Ursula von der Leyen’s day in Kyiv and the set of new EU sanctions that will also affect the two daughters of Russian President Vladimir Putin, who are on the list: Katerina Tikhonova, 35, and Maria Vorontsova, 36. They are the daughters of Putin and his ex-wife Lyudmila Putina. Great Britain also decided to punish them. The United States imposed sanctions on two Russian state-owned companies: the United Shipbuilding Corporation of Shipbuilding and the Russian diamond miner Alrosa USA. The European Union and Australia announced new arms shipments. The President of the European Commission left for the capital with Josep Borrell, the High Representative for Foreign Policy, to express her “unwavering support” for Ukraine in its fight against the Russian invasion. “The Ukrainian people deserve our solidarity. “That’s why I’m going to Kyiv tomorrow,” von der Leyen said during a press conference in Stockholm. A meeting is scheduled with Ukrainian President Volodymyr Zelensky.

READ  "He was armed...". The secret of the drone crash that worries Europe

Zelensky: Borodyanka is worse than Kyiv

Zelensky said that the situation in Borodinka, near Kyiv, was “more terrible” than in Bucha. The Ukrainian Prosecutor General spoke of 26 bodies recovered from two apartment buildings bombed by the Russians. Following satellite images published by the New York Times, independent Russian media outlet Medusa published a video taken from a drone showing the killing of civilians in Bucha during the Russian occupation of the Ukrainian city. The photos, compared to the video filmed on the ground after the withdrawal of the Russian army, show the simultaneous placement of the bodies.

The Pentagon: Putin has given up taking over Kyiv

Russian President Vladimir Putin gave up on taking Kyiv. This is what US Defense Secretary Lloyd Austin said. “He thought that he could invade Ukraine very quickly, and take this capital very quickly. He was wrong,” said the Pentagon chief. According to the British intelligence bulletin, in the north “Russian forces withdrew completely from Ukraine to Belarus and Russia” and “at least it will be Move some of these forces to eastern Ukraine to fight in Donbas.” A massive military deployment from the north would take “at least a week.”

As for the economic repercussions of the sanctions, “external conditions remain difficult and limit Russia’s economic activity,” in a note from the Russian Central Bank on the reference rate dropping to 17% from 20%. “Risks – continues the note – to financial stability remain.” It is also indicated that price increases are no longer accelerating as quickly as they were in the weeks immediately following the start of operations in Ukraine.