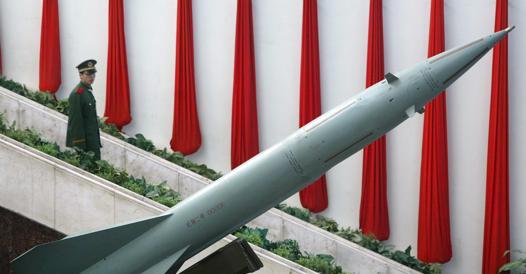 The Wall Street Journal: “Beijing believes that the United States can resort to nuclear weapons in the event of a conflict, and that the invasion of Ukraine highlights the weight of a powerful nuclear arsenal”

From our correspondent from Beijing
A series of satellite images focused on a 1,000 square kilometer desert area in China’s Gansu Province raises questions about it. Beijing’s missile plans.

Pictures show the virtual completion of Excavations in hundreds of silos that could be used to hide missiles with nuclear warheads. The works had already taken place in June 2021, but were in the initial phase, and are still covered; Now they will finish, appear in the open, This indicates a possible acceleration in the expansion of China’s nuclear arsenal.

The information is a long service topic of “The Wall Street JournalTheir sources, in addition to commercial satellite images of the planet, are analysts from the Federation of American Scientists in Washington and “people familiar with the thinking of the Beijing leadership” (a somewhat vague formula that does not indicate direct contact with the Biden administration).

The silos will be 119It is located in Yumen District, two thousand kilometers west of Beijing.

at the moment, China has a relatively modest nuclear arsenal, estimated at 350 warheads And one hundred ICBMs, compared to about 3,750 US warheads, including 1,373 missiles on long-range carriers.

When the first alarm hit the pages of the Washington Post in June 2021, independent experts warned that it could also be strategic disinformation. Some or many silos can be “diversions”, i.e. “empty containers” in dry land to simulate the presence of non-existent (or currently non-existent) missiles. These sites will make the Pentagon’s continuous monitoring work more difficultopening a new front of uncertainty about China’s true military capability.

At the end of July 2021, a new announcement was transmitted to the New York Times: further excavations were found in Xinjiang, near Hami locality.

This installation, which is still in its initial state, can collect about 110 new silos scattered over an area of ​​\u200b\u200b800 square kilometers. The mosaic of the missile apparatus in Beijing will become more complex.

Last summer, China’s moves fueled the Cold War atmosphere with the United States. And they are now entering a new and completely unsettled strategic framework. Wall Street Journal sources indicate that Chinese efforts to modernize and expand its missile arsenal date back to before the crisis in Ukraine. But they argue that The acceleration of the silos could be the result of the reflection of Chinese strategists on the situation in Europe.

In Beijing, they noted that the United States has stayed away from war on the ground, precisely to avoid the risk of a nuclear escalation with Russia. Given a possible future confrontation with Taiwan, the People’s Republic of China believed that a larger missile arsenal would dissuade the Americans from engaging in direct and field defense of the democratic island.

So far, Beijing has always hinted at it Commit not to use the atomic weapon first It was content with a small arsenal capable of acting as a deterrent. However, the evolution New devices to bridge the technological and destructive distance from the United States (last summer Washington was surprised and shocked by the Chinese hypersonic missile test).

The new silos, real or assumed, would be aLarge enough to conceal the DF-41 long-range missiles that entered service in 2020 and capable of reaching US soil.

Beijing denies the arms race and accuses the Americans of a “Cold War mentality”. In this climate of widespread international hostility, the risk of miscalculation also increases. In March, an Indian missile “due to a malfunction” was launched in Pakistani territory. Fortunately, he stormed a rural area and Islamabad’s defense kept his nerve.