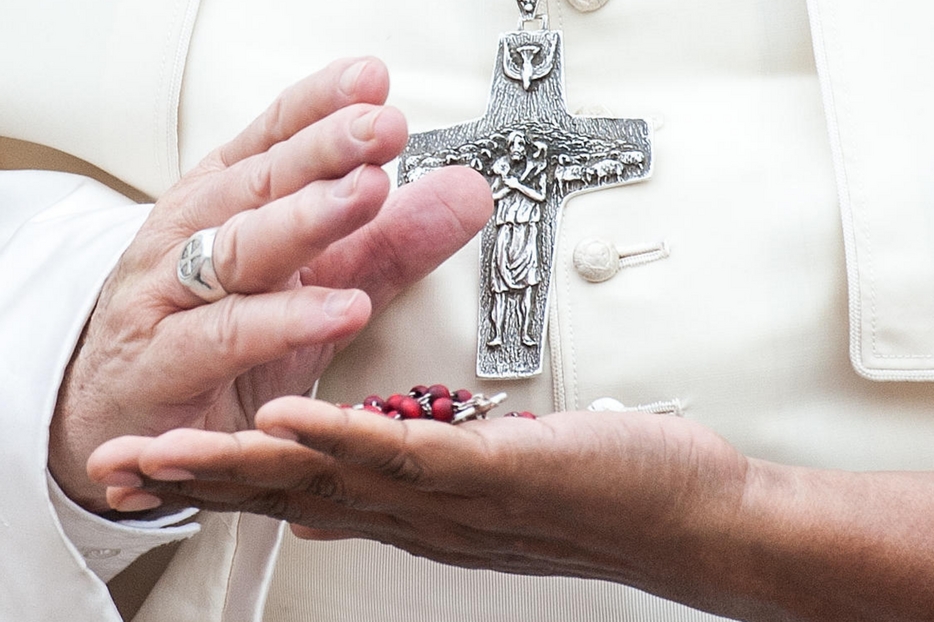 In prayer for peace. Assigning Mary to a world divided by hate and engulfed by war. On Tuesday, May 31 at 6 p.m., at the end of the month traditionally dedicated to the Virgin, the Pope will recite the Rosary in front of the statue of Maria Regina Pacis in the Basilica of Santa Maria Maggiore in Rome. This is the statue, commissioned by Benedict XV and designed by Guido Galle, placed in the left aisle of the church. The Virgin is represented with her left arm raised as a sign commanding the end of the war, while she holds Baby Jesus in her right hand, ready to drop the olive branch symbolizing peace. Flowers are carved on the base to symbolize the flourishing of life and the return of peace. It is customary for believers to place small, handwritten cards indicating prayer intentions at the feet of the Virgin. The Pope will lay a wreath at the bottom of the statue before directing his prayers to the Virgin and leaving his own intention. The choice of place is not accidental. Aside from the Pope’s association with the basilica where he goes on departure and return from each apostolic journey, the statue was built in 1918 precisely to demand an end to the conflict, in the event of World War I.

On May 31, Francesco will not be alone. Accompanying him in prayer, boys and girls who have received First Communion and Confirmation in recent weeks, Scouts, representatives of the ardent Marian Youth (Gam), members of the Vatican Gendarmerie, the Swiss Guard and the three dioceses of Rome dedicated to the Virgin Mary, Queen of Peace, with members of the Roman Curia.

READ  Putting the smartphone in charge: A 14-year-old died of electrocution

Moreover, as further evidence of their closeness to those who pay the highest price for the conflict, they were invited to recite dozens of rosaries: a Ukrainian family, people associated with war victims and a group of military chaplains with them. concerned bodies.
In addition, many other shrines around the world will share the Marian Prayer, including the Shrine of the Mother of God (Zarvanitsya) in Ukraine and the Holy House of Loreto. Other temples dedicated to the Virgin and associated with Rome will be: Cathedrals of Our Lady of Salvation in Iraq. Our Lady of Peace in Syria; Mary Queen of Arabia in Bahrain. In addition to the international shrines: the shrine of Our Lady of Peace and the Good Journey. International Shrine of Jesus the Redeemer and Mother Mary; Jasna Gora Reserve (Poland); Korea International Martyrs’ Shrine; Shrine of Our Lady of Knock International; Holy Virgin of the Holy Rosary; Madonna, Queen of Peace; Our Lady of Guadalupe; Lady Lourdes.

At the end of Marian month – a note explains – Pope Francis would like to offer a gesture of hope to the world, beset by conflict in Ukraine, and deeply wounded by violence in the many theaters of war that are still active.

Here is the Pope’s prayer

“Oh Mary, Mother of God and Queen of Peace, during the pandemic we have gathered around you, to ask for your intercession. We asked you to support patients and strengthen medical staff; We beg for mercy on the dying and to dry the tears of those who suffered in silence and loneliness. Tonight, at the end of the month especially devoted to you, here we are again before you, Queen of Peace, to beg you: Give the great gift of peace, and stop soon the war that has been raging in different parts of the world for decades now, and which has also invaded the European continent.”

This is what the Pope will say this evening at the beginning of the Rosary.

how to track it

The prayer will be broadcast live on the official channels of the Holy See, all Catholic networks in the world will be connected and will be available to the deaf and hard of hearing through translation into Italian sign language LIS.