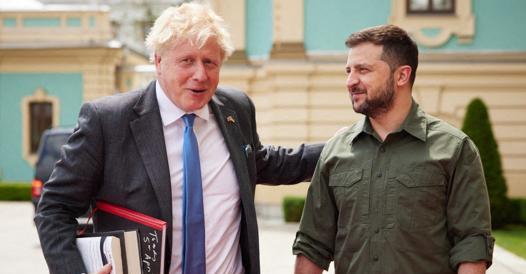 • Kyiv reports that «The fierce struggle for Lugansk continuesAnd the Russians attack from nine directions.
• Yes from Brussels to “candidate country” status for Ukraine and Moldova
• Russia tried to infiltrate with a spy at the Hague International Court.
• Enel sells its stake 56.4% in Russia for 137 million euros
• Boris Johnson: “We will train thousands of Ukrainians in a few months.”
• Putin’s speech Petersburg Forum: “The US-dominated world is over.”

The UK Ministry of Defense’s regular bulletin today focuses on a less ‘cheesy’ aspect of war.

According to the British Army 007, as has already happened in Syria, the Moscow army in Ukraine also used “humanitarian” corridors declared unilaterally as a mechanism for manipulating the battlefield and forcing the forced displacement of the population. ”

It is possible that the Ukrainian civilians besieged in Severodonetsk were skeptical about the use of the corridor proposed by the Russian forces in recent days, because “it would lead them to the city of Svatova, deep in the territory occupied by the Russians.”

7:29 am – ‘Ukraine with its former borders no longer exists’

That the ongoing operation in Ukraine is nothing but a “special military operation” is now clear to the world, despite the Kremlin’s constant denials.

But if a new element was needed to remember, it was provided today by a spokeswoman for the Russian Foreign Ministry, Maria Zakharova, who spoke to Sky News Arabia – in an interview largely covered by Russia’s RIA Novosti Agency – said: “The Ukraine we knew, inside Those borders, they don’t exist anymore. And that won’t be the case anymore. It’s clear. Those borders don’t exist anymore.”

“He’s alive,” Alexander Drake’s family says. The former army sergeant, who is feared to end up in the hands of the Russians after his disappearance in Ukraine this month, will appear alive – the family said – in a new video circulating online in which he addresses his mother, Louis. “Mom, I just want to tell you that I am alive and that I hope to be home as soon as possible,” she says, expressing her love for her parents and their dog Diesel, but without revealing where she is.

The family said that Druck, like other American veterans, went to Ukraine to teach that country’s forces how to use American weapons. The soldier appeared on video the same day the Kremlin-controlled newspaper Russia Today reported that he and another American, former Marine Andy Tai Huynh, surrendered to the Russian army after being abandoned by Ukrainian leaders. Former Marine Corps officer Grady Corbasi, the third veteran, has been missing in Ukraine since April. A fourth, Willie Joseph Cancel, was killed in May. The US administration claims it does not know the whereabouts of the three missing ex-soldiers, but has advised Americans not to go or stay in Ukraine.

06:02 – Zelensky: “The historic opening of the European Union candidacy”

Historic achievement. This is how the Ukrainian President, Volodymyr Zelensky, commented on the green light of the European Union Commission for Ukraine’s candidacy. “We are one step away from the start of full integration with the European Union.” Volodymyr Zelensky, in a video message on social media, said that the European Commission’s recommendation to “candidate is a historic achievement for all those who work for the benefit of our state.” Reference to the Commission’s recommendation to the Council of the European Union to appoint Ukraine as a candidate for EU membership. “It remains only to wait for the decision of the European Council,” which stated that Ukraine “did everything in its power to ensure that this step was also positive,” Zelensky added. For the president, Kyiv “deserves it” because “Ukrainian values ​​are European values. Ukrainian institutions maintain their resilience even in conditions of war ».

Telephone call between the President of the European Union Commission Ursula von der Leyen The Ukrainian president Volodymyr Zelensky After the European Executive Authority approved the candidacy of Ukraine. “I was very moved by President Zelensky’s words over the phone today, following our recommendation to grant Ukraine candidate status. Ukrainians can count on the Commission on their way to the EU,” he wrote in a tweet.

I was very impressed by the president Tweet embedKind words on the phone today, following our recommendation to grant Ukraine candidate status.

Ukrainians can count on Tweet embedTheir continued support as they move all the way to the European Union. pic.twitter.com/ey8BVCLgzo

05:46 – Russia tried to infiltrate the Hague International Court with a spy

READ  Extreme heat coming to the UK, especially England (London) and Wales, a risk of 40°C? « 3B Weather

(Andrea Marinelli and Guido OlympioTwelve-year-old Victor Muller-Ferreira is rumored to be Brazilian, originally from Niterói. And in order not to be mistaken in recounting his past, he put together a plot that he memorizes. A story full of details he gave when he met someone.

Boris Johnson offered to launch a major training operation for Ukrainian forces, which Plans to train up to 10,000 soldiers every 120 days. British media reported this. The training will take place outside Ukraine. Johnson said the plan would turn the tide of the war.

In the Sells 56.4% of Russia’s shares for 137 million euros. As expected for some time, the group led by Francesco Starace left the business in Russia as well. On June 16, agreements were signed on the sale of its entire stake in the capital of Pjsc Enel Russia. In particular, the Energy Group signed two separate agreements, respectively, with Pjsc Lukoil and the closed mutual fund Gazprombank-Frezia for the sale of the entire stake owned by Enel Russia, equal to 56.43 percent of the capital of the latter company. , for approximately 137 million euros.