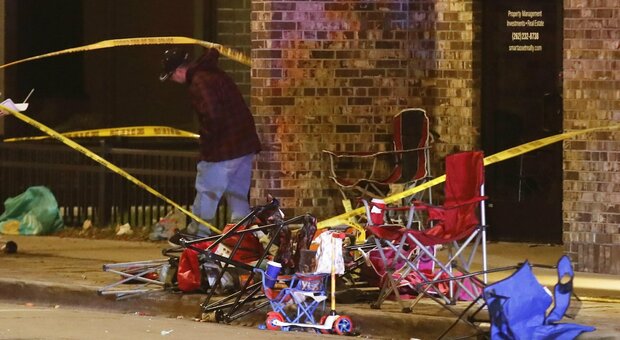 a Biased rapper On the run after a stabbing, two days after being released on bail for violent crimes: this is the main head start investigators are pursuing in the investigation of SUV cars who pounced on the Christmas parade in Waukesha on Sunday, WisconsinSow death and fear. According to a still provisional tally, there are at least five dead and more than 40 wounded, including 18 children between 3 and 16 years old: six of them are in a critical condition. Also among the victims were some of the grandmothers of the Milwaukee Dancing Grannies, after the car crashed into a school band playing Jingle Bells. Ended up in handcuffs Daryl Brooks Jr., 39, a rapper by the name MathBoi Fly with a long criminal record, with records since 1999 for drug and weapon possession, battery, family abuse, resistance to a public official and dangerous driving. According to several websites, Brooks is also reported to be on the Nevada Child Sex Offender Registry.

BREAKING: First video of a red Ford Escape breaking through barricades after parade-goers are mowed down and shotgun fired into a crowd in Waukesha, Wisconsin pic.twitter.com/QHDi2fsKDz

Cars on the crowd: at least 30 wounded

In some posts on social media, the man attacks the police and glorifies Malcolm X and talks extensively about his activity as a rapper, as documented through online clips. He was arrested on November 5 on charges of domestic violence, resisting a public official, dangerous conduct and parole violation, and although not guilty on all counts, he was released on $1,000 bail two days earlier. Investigators are checking if he escaped after a knife fight that took place shortly before the accident.

So it could be a tragic accident, as confirmed by the fact that the driver appeared to avoid some people at first, an unusual gesture for those who deliberately threw a car into a crowd. Thus it seems that the assumptions of association with domestic or international terrorism have been avoided. Or fears of insane retaliation for the acquittal of Kyle Rittenhouse, the 18-year-old white man who was acquitted by a jury of killing two anti-racism protesters with an assault rifle in Kenosha, just 80 kilometers from Waukesha.

You can see the speed of the red SUV right behind the squad members, hear a scream and then a law enforcement officer runs. @fox6now pic.twitter.com/8lO5oRuP1I

For more than 24 hours, America has experienced the nightmare of an attack similar to the attack on the Christmas market in Berlin in December 2016 (12 dead) and on the Corniche in Nice five months earlier (more than 80 casualties). Or in Charlottesville, Virginia, in 2017, when a white supremacist’s car rammed into a crowd of protesters protesting against a rally by right-wing extremists, killing a woman and injuring about 20 people. The carnage occurred in the middle of the afternoon, when a red Ford Escape swept hundreds of marchers and sang the traditional parade that opened the Christmas holidays (including the upcoming Thanksgiving) in this city of 70,000-30 kilometers from Milwaukee. . Cynic Fate wanted the theme for this year’s fair, the first since the pandemic, to be “Comfort and Joy.” Instead there were scenes of panic “bodies are flying everywhere” and screaming, tears and a general stampede, witnesses testified. “I heard a loud noise and then the deafening cries of the people who had been hit by the car, and many were injured on the ground,” said city councilor Angelito Tenorio.

READ  Governor Greg Abbott and the massacre in Texas - Corriere.it

“There were pellets, shoes, and hot chocolate everywhere,” recalls Cory Montiello, who fled the restaurant when he heard a car crash into his daughter’s dance band. “I had to move from one body to another to find it,” added the man, whose wife and two daughters were grazing in the car. On the other hand, Jason Kellner had just seen his son pass by the school gang when the SUV pounced on the crowd and “started to clip it.” “I’ve never felt so bad before and I was wondering what to find,” said the man, who saw his son unharmed on the side of the road near the wounded and bloodied saxophone. “We don’t have all the elements of this tragedy yet, but my administration is closely monitoring developments,” President Joe Biden said in the evening, as Wisconsin Governor Tony Evers ordered half-flags in honor of the massacre victims. A dedicated fund has also been set up to help them

Update: A car just passed in the middle of a parade in downtown Waukesha.l. Many people on the ground were injured.