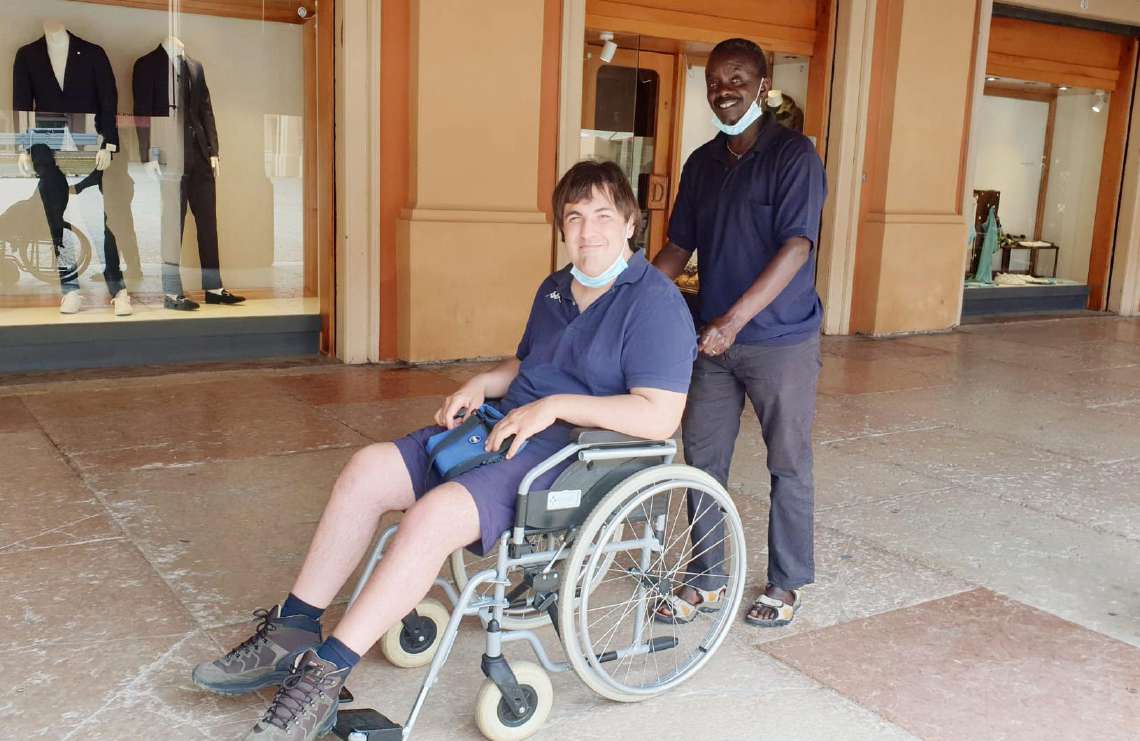 Really friends. This may be the title of Lughese’s version of “Almost friends,” in which the complicity between a disabled person and his strange Senegalese caregiver turns into a relationship imbued with trust and vitality. For some time also in Lugo, I happened to come across a similar scene. Under Pavaglione, as well as across the field, 54-year-old Jean-Marie, also from Senegal, takes a boy in a wheelchair for a walk, but he is not his caregiver or companion. He is a true and almost immortal friend.

Instead, Mattia Zachary, 34, was born in Lugo where he continues to live with his parents. From the age of only four months he suffered from quadriplegia.

Their photography, which many examine with sympathy and tenderness, is a domestic reproduction of this famous film, with only one difference: the two protagonists do not act, it is their lives, their routines.

Told this sounds like one of many – tell the truth is never enough – beautiful stories about inclusion and volunteerism. However, those who are used to coming to the center will note that pushing this wheelchair someone in turn does not walk perfectly, even if it reduces it. The two, both very loyal, met for five years in the presence of the same Catholic scholar, but only two years ago this relationship began and neither of them knew what to call it.

“With the arrival of covid, I lost touch with the groups I used to frequent – says Mattia, a volunteer at Unitalsi who over the years has graduated in literature and can boast of releasing four books – and was left a little alone. For me it was important and always will be to have someone by my side, But people do not always want to devote time to those whom they consider to be a problem. One day, Jean-Marie suggested taking me on tour, and then we repeated it over and over. Today I say that we meet every day.”

READ  Now the paparazzi are gone.

The Senegalese worker, who has been in Italy for over ten years, finds every day a few hours to fit shifts to be with his young friend. He picks her up from the house and then they walk around and talk a little about everything, and go to pray, but – they both admit smiling – he must also put up with all the birthdays and celebrity days and not the ones Mattia Heart mentioned every morning. “I always find time for him – explains Jean-Marie. Being able to help him or simply be his company has made me understand more the value of life and the importance of the Church; all this every day increases my faith. Mattia and his family are somewhat like me, and I think it is the same for them too. ».

In fact, his wife and daughters are in Senegal waiting for him. Last winter he traveled with them for a while, but every day he made a video call with Mattia, who probably had a little fear of losing him. “I am happy for them – the boy responds – and his family knows and loves me.”

The fact remains that if everyone moved to Lugo, then Mattia would be much happier. Certainly, however, it is not his handicap that distinguishes him, but rather his spontaneous simplicity. This is evidenced by the fact that when we ask him which character he would like to meet, he comes up with a name that makes eyes widen and smiles: “Pippo Baudo: Because he had a good TV, unlike today’s trash where everyone just screams.”