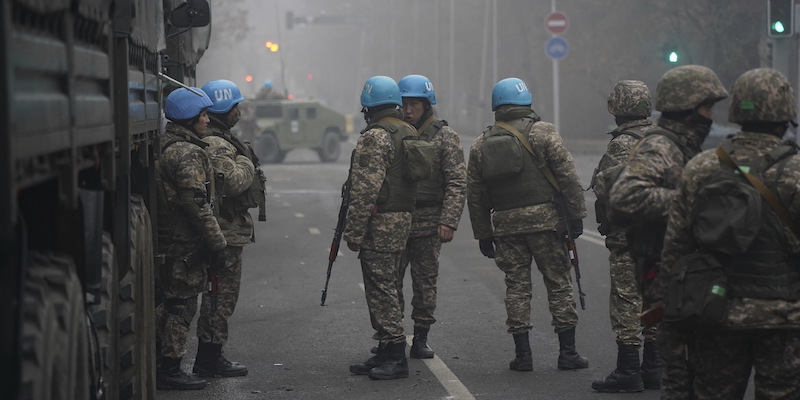 On January 8, the photo agency News agency He published some pictures showing Kazakh soldiers wearing United Nations peacekeeping forces, guiding for peacekeeping missions authorized by the United Nations. The images attracted a lot of attention, given that the blue helmets, associated with peacekeeping missions, were worn by the army of a country that in those days was violently suppressing the protests of a few thousand people. Against the authoritarian government Led by President Kassym-Jomart Tokayev, accused of corruption.

However, those helmets were used without authorization from the United Nations, for a reason that is not yet clear: perhaps due to the lack of defensive equipment for the country’s security forces, which are rarely used to suppress anti-government demonstrations, and which are almost non-existent in Kazakhstan. -Existing; Or perhaps in an attempt to give greater legitimacy to a violent police operation that has exclusively internal motives, and is opposed by the majority of the international community.

One of the photos depicting Kazakh soldiers in blue helmets (Vladimir Tretyakov / NUR.KZ via AP)

The blue helmets shown in pictures News agency It is the reason for naming soldiers who are part of United Nations peacekeeping missions, and who come from different countries, “blue helmets“.

Their tasks can only be delegated by the Security Council, the United Nations body in which there are also five countries with veto power, that is, the power that allows them to block any decision, if they want (they are the United States, France, China, Russia and the United Kingdom). These tasks are usually aimed at strengthening the ongoing peace process, or ensuring stability and peace. So UN peacekeepers are not an army per se: they are soldiers who are called up only if the UN starts a peacekeeping mission, and those who arrive at the mission site have to follow the rules of engagement set by the organization itself.

– Read also: In 2020, the United Nations celebrated its seventy-fifth birthday

In Kazakhstan, the United Nations has not authorized any peacekeeping missions. And the soldiers who intervened during the protests were Kazakh soldiers who, for some reason, wore blue helmets.

Two days after the photos were posted, a UN spokesperson said request an explanation To the Kazakhstan Permanent Mission to the United Nations, and thus represents the Government of Kazakhstan. the mission replied With a somewhat ambiguous word (“embarrassing”, he wrote France 24He said that the soldiers in the photos are members of the Kazbat unit of the Kazakh army, which is dedicated to peacekeeping missions. The unit “is mobilized to aid and protect the city’s strategic infrastructure from terrorists and extremists”, and “except for helmets, they are part of the official equipment of the peacekeeping forces that were employed during the extremely dangerous situation, and nothing else was used. Material “United Nations” » .

It therefore appears that the explanation given by the Permanent Mission made clear what had happened. It was not the United Nations that allowed the use of the blue helmets, but the Kazakh government, even if it was not known for what reason: if it was due to the lack of defensive equipment that had to be provided to the KAZBAT army, or if it was for the sake of further clarification. The regime’s politician is trying to present repression as a legitimate international process.

In theory, the unauthorized use of UN uniforms in operations that results in death or serious injury is a war crime, provided it is an international conflict.

READ  "Drone in the center of Kyiv": a Russian factory on fire | direct

Come he said to Radio Free Europe Eric David, an expert in international law and peacekeeping operations at the Free University of Brussels, it is likely that operations involving Kazbat soldiers will be considered operations within the country, and not part of an international conflict, despite the presence of the Russian army in Kazakhstan (which began its withdrawal Thursday). David added that this means that the use of blue helmets could be considered “unlawful, but not a war crime,” and therefore may not have serious consequences.

– Read also: In Kazakhstan, the revolution against the regime has been largely suppressed