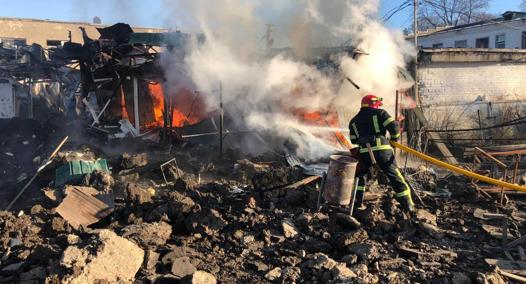 to Marta Serafini, posted to Kyiv, and Redizione Online

War Bulletin on Tuesday, January 10, live. The United States is considering sending Stryker armored vehicles, according to the Politico portal

• The war arrived in Ukraine on 321.
• Fierce fighting in Donetsk. Moscow claims to have killed more than 600 Ukrainian soldiers in Kramatorsk, but Kyiv denies this.
• New and Violent attacks on SolidarNear the eastern city of Bakhmut.

• Kadyrov threatens Zelensky again: It must be deleted.

11:07 AM – Shoigu: We will expand our modern strike arsenal and nuclear weapons

The Russian armed forces will soon expand their offensive weapons arsenal. This was reportedly announced by Defense Minister Sergei Shoigu RIA Novosti. The minister said that our immediate plans include expanding arsenals of modern offensive weapons, stressing that Russia will continue to develop the nuclear triad – land, sea and air – and maintain its combat readiness. Shoigu emphasized that the nuclear shield was and remains the main guarantor of the sovereignty and territorial integrity of our state.

11:01 am – Zelensky: The presence of Russians in Ukraine means death and pain

The world knows that every day of Russia’s presence on Ukrainian soil means deaths, injuries, pain and suffering for people. Ukrainian President Volodymyr Zelensky wrote this on his Telegram channel, posting a selection of photos from the conflict, as he has often done since the war began. He added: Ukraine must get everything it needs to expel terrorists from our land and reliably protect our people from any Russian escalation plans.

10:35 am – Moscow: Admiral Gorshkov exercises in the Norwegian Sea

The Admiral Gorshkov frigate, armed with Zircon hypersonic missiles, repelled a mock enemy air attack during exercises in the Norwegian Sea: the press office of the Russian Northern Fleet reported today, according to the information office of the Russian Northern Fleet. tax. The press office said that the crew of the frigate Admiral of the Fleet of the Soviet Union Gorshkov conducted exercises to counter a mock enemy air strike with weapons, aircraft and anti-ship missiles in the Norwegian Sea in bad weather conditions.

10:24 – Kyiv: strong explosions in Kherson, alert in Odessa and Mykolaiv

Strong explosions are taking place in Kherson this morning: Another Russian bombing of Kherson. And the deputy head of the regional council, Yuri Sobolevsky, wrote in Telegram, citing local media, that there may be frequent arrivals of missiles. Meanwhile, air warning sounded in the southern regions of Ukraine Odessa and Mykolaiv.

09:34 – Moscow: The conflict in Ukraine is a clash between NATO and Russia

The events in Ukraine are not a clash between Moscow and Kiev, it is a military clash between NATO and, above all, the United States, England and Russia. Fearing direct contact, NATO instructors lead Ukrainian boys to certain death. With the help of a special military operation, Russia liberates its regions from occupation and must put an end to the bloody experience of the West to destroy the fraternal Ukrainian people. This was stated by the Secretary of the Russian Security Council Nikolai Patrusheva loyalist of Vladimir Putin, in an interview with the Russian newspaper Argumenty i fact.

The President of the Republic, Sergio Mattarella, has reconvened the Supreme Defense Council, at the Palazzo del Quirinale, for Tuesday 17 January 2023 at 17.00, after failing to hold the meeting already scheduled for 12 December 2022. Any changes and the following topics are expected to be discussed: the current situation of the war in Ukraine, the consequences for the geopolitical balance and the general effects on Italy; Study of the main crisis scenarios, with particular attention to the enlarged Mediterranean region, and the national position with regard to strategic political relations in the European and transatlantic spheres; Efficiency status and modernization process for military tool. What we read in a note from Quirinale.

08:32 am – Tajani: We are working with the French to give Kyiv an air shield, but it takes time

And about supplying Ukraine with the so-called air defense shield, Italian Foreign Minister Antonio Tajani told the microphones Radio me too On Radio 1: We voted in Parliament to renew the authorization to send arms to Ukraine, in a European and NATO context, after reporting to Parliament. Adding: An Italian-French project. We are working intensively with the French. There are technical problems that must be solved, technical ones related to the military aspects, not the technical bureaucracy. He repeated: But of course Parliament will be informed before any transmission.

0816 – Kyiv: Russia and Wagner probably control most of Soldar

(by Marta SerafiniIn the daily update issued earlier, the British Ministry of Defense said that Russia and Wagner are likely to take control of most of Solidar amid heavy fighting over the city of Donbass. The ministry said Russia and Wagner had made tactical progress over the past four days, in what it described as likely an attempt to encircle Bakhmut from the north and cut lines of communication. He adds that Russia is unlikely to encircle the city in the short term, as Ukrainian forces maintain stable defensive lines in depth and control supply routes.

Ukrainian forces have eliminated 710 Russian soldiers and one ship in the past 24 hours. The Kyiv General Staff claimed this on Facebook, promising to provide more details about the enemy ship’s destruction at a later date. According to the Ukrainian General Staff, Russia has lost 112,470 soldiers since last February. The Russian Armed Forces also lost four tanks, seven armored fighting vehicles, four artillery systems, four reconnaissance drones, and eight vehicles and tankers in the past 24 hours. According to the General Staff, Russian troops are conducting offensive operations in the Bakhmut, Avdiivka and Lyman directions, trying to improve the tactical position in the Kupyansk direction, concentrating efforts on occupying the entire territory of the Donetsk region.

The United States is considering sending Armored vehicles
the from fighting Striker To Ukraine in an upcoming aid package to help Kyiv avoid waiting Russian attack Spring, according to sources close to the file reported by Politico. The news follows the Biden administration’s announcement last week that it will send 50 Bradley Fighting Vehicles, a powerful armored personnel carrier that is tracked and carries automatic cannonOne Machine gun and tow missiles. According to sources in the US newspaper, Strykers could be part of Next slide of military aid. The US administration may announce the package late next week at a meeting of the Ukraine Defense Contact Group in Germany.

11.43pm – Because Wagner wants Bakhmut and Solidar at any cost

(Andrea Marinelli and Guido Olimpio) Evgeny Prigozhin wants to occupy the Bakhmut Tunnels, an extensive network used in the salt and gypsum mines. Wagner head lo he told the media To explain the continued attacks on the Ukrainian domestic. For five months, the Special Company’s mercenaries have been attacking to open a breach in the perimeter defenses Bakhmut and the suburb of Solidar, the center of the battle. Militiamen – including ex-convicts released on condition that they wear a uniform – reservists and military personnel invested enemy lines leaving hundreds of items on the field and inflicting similarly heavy casualties among the defenders. To this reality, the director of the favorite company in the Kremlin added details of showrooms in the Solidar area, which is tens of kilometers long, with vast spaces in which parties and events were held in the past.

READ  United States of America Sixth consecutive out-election of Republican McCarthy as Speaker of the House of Representatives. Biden: 'It's embarrassing'

Ukrainian forces are resisting new and harsher attacks on Soledar, near the eastern city of Bakhmut, which Moscow has been trying to capture for months. This was stated by Ukrainian President Volodymyr Zelensky in his traditional evening address. I thank all our soldiers who have protected Bakhmut … (and) all the fighters of Solidar, Zelensky said, who are resisting the new and fiercer attacks of the invaders! .

21:21 – Antipersonnel mines in Ukraine, Crocito: Russians are lying knowing they are lying

The Russian Embassy in Italy is lying, as is the Russian Foreign Ministry, knowing that it is lying about alleged antipersonnel mines produced and sold by Italy. Italian Defense Minister Guido Croceto denounced it in a memorandum. The latest tweet from the Russian Embassy, ​​in particular, contains willfully misleading, untruthful and seriously disturbing information, Crosetto added, suggestive and tendentious propaganda against our country that has always respected the norms of international law. The use of fake news and out-of-context imagery to prompt the reader to draw completely wrong conclusions is surprising. The defense owner added that the mines reproduced in the tweet (1 anti-personnel and 2 anti-tank) are reminiscent of Italian-made Valsella / Tecnovar mines, which cannot be Italian for several reasons.

21:18 – USA, Sullivan: The people and Congress continue to support Ukraine

The majority of Americans and the US Congress continue to support Ukraine and efforts to provide military assistance to the country. This was stated by the White House National Security Adviser Jake Sullivan. “I think the vast majority of Democrats and Republicans … and the vast majority of the American people continue to support a policy of providing Ukraine with the means to defend itself,” Sullivan told reporters. Sullivan said the narratives about declining support for Ukraine are the result of one party’s “distinguished minority”. Sullivan added that support for Ukraine affects all parts of the country and people from all walks of life.