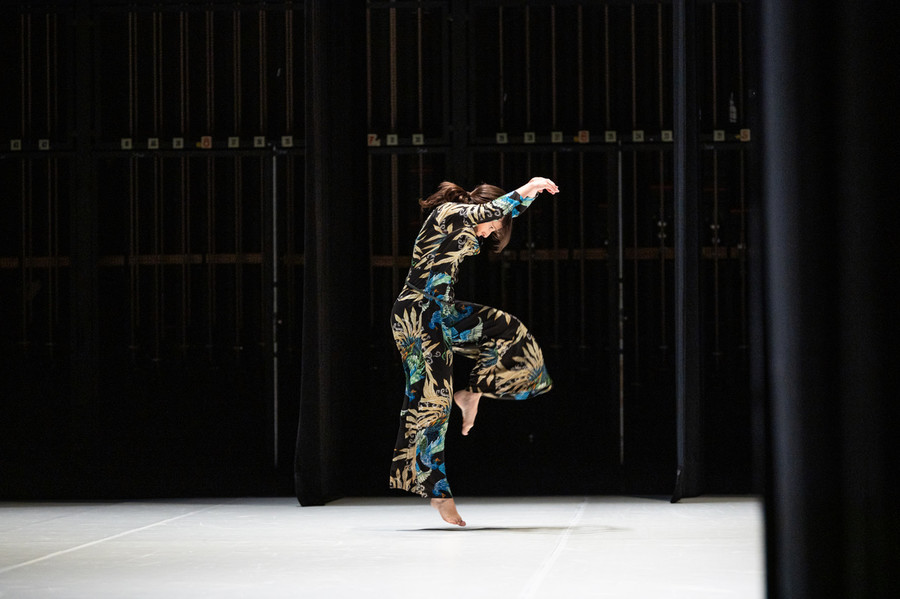 Spazio Core 2022 opens with a double event for “Paradise“, theatrical season under artistic supervision Chiara Bersani and Julia Traversi Accomplished in collaboration with the City of Asti, Piemonte dal Vivo, Acerbi Theater and Mon Circo, with the support of the Piedmont region, the CRT Foundation, SCENA UNITA, Cesvi La Musica che Gira, the Music Innovation Hub and with the main supporter the Compagnia di San Paolo Foundation As part of “ART ~ WAVES”.

For Creativity, From Idea to Scene” which looks at the consolidation of the regions’ creative identity by supporting programming in the field of performing arts and contemporary creative production, combining research, production, supply and distribution in the logic of the ecosystem to advance the artistic careers of the region.

Saturday January 8 at 6 pm, before the performances, the first date with Paradise Dialogues will be held “sponsored by Viola Le Moreau.

Eden It is an intimate encounter between two bodies in two very different locations: the stage and the audience. On closer examination, the practice in captivity concerns both bodies, and appears to be complicit in the renunciation of “heaven” in absolute mutual isolation. But the exceptional nature of the context suggests that this is not the case.

MK Group has been involved in choreography and performance since 1999 and revolves around an original core of artists and joint and cross-projects, including a close collaboration with musician Lorenzo Bianchi Hoesch. The group was immediately invited to the most important festivals of the new scene in Italy and abroad. Among Robinson’s recent productions, he made his debut in 2014 at Teatro Argentina in Rome and is still on tour. With Veduta (2016) the collection begins an immersive investigation of landscape and perspective that can be adapted to any urban skyline. Running on perpetual motion and pure motion designed for a large number of interchangeable performers, Bermuda won the Danza & Danza Award as Best Italian Production 2018 and UBU Award 2019 as Best Dance Show in the Bermudas_forever edition. North Wall is an international collaboration co-produced with Torinodanza 2018 and hosted in 2020 at the Teatro Argentina in Rome and at the Ravenna Festival. With “Anatomical Pieces” begins a new cycle of investigation open to the public in all its phases, which revolves around the research work in the rehearsal room and the group’s coexistence at the India Theater in Rome for the 2020 Indian Ocean Project.

The circulation of the performances is surrounded by an intense activity of conferences, workshops and experimental proposals, including the ballet platform of the Santarcangelo Festival (2014 and 2015), the projects of the 2013-14-15 Danza Biennale and the 2019 Biennale Theater, a constant dialogue with the Paolo Grassi School in Milan and a training workshop Actors at the Teatro Stabile of Turin. Michele Di Stefano received choreographic commissions from Aterballetto, the Korean National Contemporary Dance Company, and Nuovo Balletto di Toscana.

He is a Dance Programming Consultant (GRANDI PIANURE) for three years 2018-20 from Teatro di Roma, Co-curator of the Giacimenta Project for Matera 2019 and founder of TROPICI (Angelo Mai) and BUFFALO (Palazzo) delle Esposizioni Rome) performance courses.

In 2018, he sponsored the outdoor section of the BolzanoDanza-Tanzania Festival. In 2014 he was awarded the Silver Lion for Innovation in Dance at the Venice Biennale and in 2018 the Nico Garrone Award. In 2012, the text of the instructions for choreography and meteorological reports for Quodlibet species, independent factors and multifactorial systems, was released by Michel Di Stefano and Margherita Morgantin. Since 2010, the group has received MiBAC’s contribution.

Francesca Linea Ugolini Born in Turin in 1990. Trained in classical, contemporary and personal dance at the Turin Ballet Theater School directed by Loredana Forno. In 2011 she graduated in contemporary dance at Real Conservatorio Profesional de Danza “Mariemma” in Madrid.

Francesco Saverio Cavalier She is an Italian dancer and artist based in Rome. He graduated in 2012 from the National Academy of Dance in Rome. From 2012 to today, he has collaborated with the Romanian group MK directed by Michele Di Stefano, and has participated in the productions of “Impressions for Africa”, “Robinson”, “Barrett Nord”, “Bizzy Anatomy”, “Eden”. In 2013 he was one of the dancers selected for the “Mishima” award by Ismael Ivo on the occasion of the Naples Teatro Festival. From 2014 to 2015 he works for the company Artemis Danza of Monica Casadei. From 2015 to 2018 he was a permanent part of the Ballet Roma team, under the artistic direction of Roberto Cassarotto, participating in all productions of the company and working with choreographers such as Alessandro Chiaroni, Chris Haring | Liquid Loft, Itamar Serussi Sahar, Francesca Pennini, Giorgia Nardin, Chiara Frigo etc. Since 2018, she has been collaborating with Alessandro Sciarroni on the Turning Project – Orlando Version. In 2019, he was one of the founders, authors, and artists of the collective MINE, whose debut “Exercises for My Poetry Statement” earned him a DNAppunti Dance Award. He currently works as a translator for Alessandro Sciarroni, Michele di Stefano, Enzo Cosimi and CollettivoMINE.

Laura Claudia SarbiniA native of Rome, he studied classical dance as a child for 10 years.

For a while he attended the most avant-garde centers in New York, in Steps, Cunningham and Graham. Returning to Italy, she immediately met Michele Di Stefano, and from 2000 on she participated in all MK productions. He studied classical music for a while. In 2002 he graduated from the University of Rome La Sapienza in Literature, History of Contemporary Art. He approaches yoga, archery, boxing, and swimming. In 2009 he became a trainer for the Gyrotonic Expansion System, and in 2012 he opened his own studio. Currently, in addition to the constant study of classical, contemporary and Gyrotonic dance, for several years now he has been keenly interested in athletic climbing, both internally and externally, thus creating his own personal language of movement and seeing the body in movement and dance.

Luciano Ariel Lanza Born in Buenos Aires (Argentina) in December 1993, he moved to Italy at the age of nine. He graduated in 2013 at the National Academy of Dance in Rome, and then, in 2016 at the Civic School Paolo Grassi in Milan, currently working on the national stage as a dancer for Michele Di Stefano (Torinodanza, Armunia, Triennale di Milano, Fabbrica Europe, Tanzbuzin). Danced in the Past by Massimo Gerardi – Hot Dog performance (with touring Germany and Romania), by Silvana Barbarini on the show Kill the moonlight (RIC.CI Project by Marinella Guatterini), for TheBabyWalk by Liv Ferracchiati and for Claudia Castellucci, by Societas Raffaello Sanzio ( Venice Biennale of Dance).

READ  The winds of science: how science changes while we are with it

Marta Ciapina, a dancer, coach and teacher, trained primarily in New York at Trisha Brown Studio and at Movement Research. As a dancer, she supports, among others, Chiara Bersani, Tiziana Arnaboldi, Daniel Albanese, and Daniel Ninarello. Luis Lara Malvasias and Gabriella Mayorino. Since 2013 he has collaborated with MK, led by Michele Di Stefano, Silver Leone at the 2014 Venice Danza Biennale. In 2015 he began his collaboration with Alessandro Ciaroni, the Golden Lion at the 2019 Venice Danza Biennale. The interpreter focuses on “anatomical pieces” – a project by MK, “Saga” – created by Marco D’Agostin and “Quel che resta” – designed by Simona Bertozzi. As a teacher, he collaborates with the School of Luca Ronconi at the Piccolo Teatro di Milano directed by Carmelo Rifici, with Biennale Danza di Venezia directed by Wayne McGregor, with a Professional BA in Contemporary Dance for Rome Ballet directed by Roberto Casaruto and with the DA Project. KING. Dance Research directed by Adriana Borriello.

The season also includes new sections dedicated to artists and associated artists, such as Viola Lo Moro, who will be responsible with “Dialoghi di Paradise” for creating an annotated bibliography on the performances and a series of literary meetings in collaboration with the Giorgio Astense Foundation Library.

The first will take place on Saturday January 8th at 6pm in the lobby of Spazio Core, where Viola will present her book The Joyful Heart (Giulio Perrone Editor).

Viola Le Moreau Born in Rome in 1985. She graduated in Modern and Contemporary Literature with a major in Comparative Literature. She is one of the members of the women’s library in Rome, Toba, which is interested in programming. Together with others, she is the organizer and organizer of the book festival “InQuiete”. Books and writes articles for print and online magazines: Leggendaria, DWF, Letterate Magazine, Feministerie.

Entry to the meeting is free in accordance with current regulations.