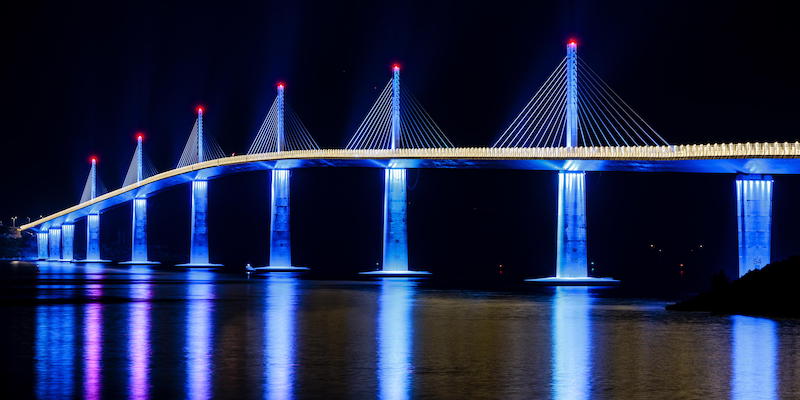 A bridge over the Adriatic Sea opened in Croatia on Tuesday evening, linking two parts of the country previously divided by a strip of Bosnian territory. The southernmost region of Croatia, the region in which Dubrovnik (or Ragusa) is located, was actually geographically separated from the rest of the country due to the presence of an outlet on the Bosnia and Herzegovina Sea. Before the bridge opened, people who wanted to cross from one part of Croatia to the other had to cross a border – for fear of waiting for hours in line – or take a ferry between the Croatian cities of Trabano and Porto Tolero (in the far north).

Now, with the opening of the bridge, Croats and tourists will be able to drive from one side to the other without crossing the border, and without leaving the European Union (of which Croatia is a part but Bosnia and Herzegovina is not). The bridge was called the Pelješac Bridge, or Pelješac Bridge in Italian, because it extends from the Pelješac Peninsula to the Komarna region.

The Pelješac bridge project was largely funded by the European Union, which contributed €357 million of the total 420 million spent and described it as “one of the largest projects funded through the cohesion policy in the European Union and in Croatia”. In addition to the construction of the bridge, the funded project also includes other infrastructure and renovations in the area, including the construction of a tunnel in the city of Stone (Stagno): these projects will be completed in 2023.

READ  “I warned you about Putin. He is never the one who starts negotiating »- Corriere.it

Elisa Ferreira, European Commissioner for Cohesion and Reforms, commented: “This bridge is a symbol of European solidarity and Croatia’s financial and political support. It will improve the lives of citizens on Earth and will be part of the development history of Croatia.”

The bridge will facilitate the passage of people and goods between the two main Croatian cities, Dubrovnik and Split, will facilitate access to public services and economic activities of the residents of the region and will greatly benefit tourism. In addition to the coastal resorts, the southern region of Croatia is also very popular because Dubrovnik is a UNESCO World Heritage Site.

The construction of the bridge was contracted with the China Road and Bridge Corporation.

The Pelješac Bridge is 2.4 kilometers long and 55 meters high to allow ships to pass. One of the main objections of Bosnia and Herzegovina when the project was approved was actually related to the fear that the bridge could impede the marine activities of NEOM Port, which is located on its strip of land and constitutes a strategic outlet for NEOM Port. The country’s trading point of view.