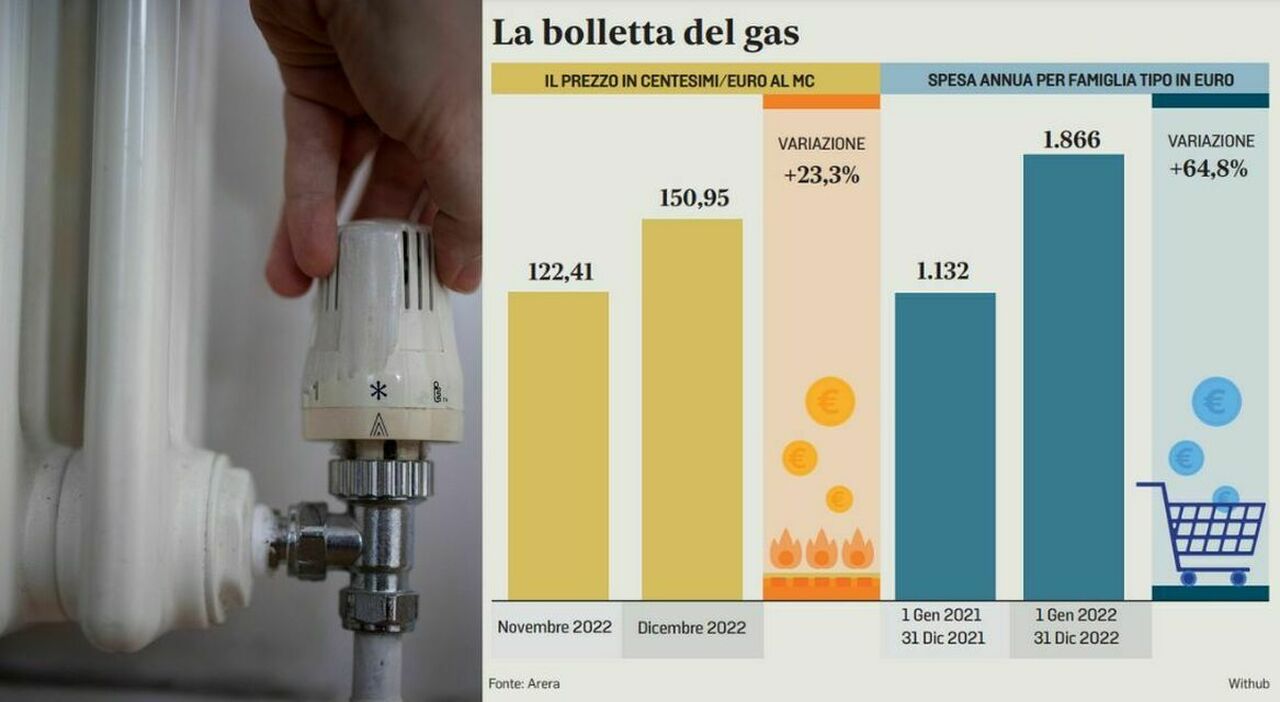 Gas bills are still going upDespite the sharp decline in natural gas prices from their peak last August. Starting this month, if prices remain at current levels, we will start to see a significant reduction in the tariffs paid by families, as has already happened for electricity. In detail, based on the average performance of the Italian wholesale market in December and for consumption in the same month, for the protected market the increase in the bill compared to November was 23.3% and the reference price for gas for a typical customer was set at 150.95 euro cents per cubic meter, including taxes (which accounted for about 16). The cost is about double what it was two years ago and about 10% higher compared to last January.

Tariffs were updated yesterday by Arera, the Energy, Networks and Environment Authority, based on the average monthly price on the Italian wholesale market (“next PSV day”). «For the month of December, which in the first few weeks recorded gas prices that were still particularly high (with a peak around 135 euros per megawatt-hour) before reductions at the end of the month, the price of raw gas, for customers with subject contracts For protection, 116.6 euros per megawatt-hour has been set, which is equivalent to the average prices recorded daily for the entire month that has just ended, ”explains Arrera in a press release.

method
The authority then clarified that if the old method of updating the quarterly and advance tariff was still used, as is the case for electricity, instead of the current monthly version, throughout the last quarter of 2022, it would have applied its price of more than 240 euros per hour. The method adopted by the authority – still holding Arera – made it possible instead to apply a charge of 78 euros per MWh in October and 91.2 in November.

“Despite these savings, in terms of bottom effects, gas spending for the typical household in the rolling year (January-December 2022) is around €1,866, +64.8% compared to 2021.” This, the regulator reminds, despite the fact that, as provided for in the budget law, the general system fee for gas was also canceled in the first quarter of 2023 and the VAT reduction to 5% was confirmed.
Meanwhile, methane prices in the Amsterdam market yesterday continued their decline. The reference contract closed at 71.3 euros, down 7.3% the day before, the lowest level since last February, when Russia’s invasion of Ukraine sent prices above 340 euros in August.

The stock trend is also reassuring. Sanam announced yesterday that last December stocks amounted to 9.3 billion cubic meters, to which 4.5 billion cubic meters of strategic storage should be added. “An increase of about 2.6 billion cubic meters from the 6.7 billion cubic meters recorded at the end of December 2021,” a note stated. The filling rate is 84%, up from 68% a year earlier.
“Certainly at this stage of consolidation, the first half of 2023 will see prices not dissimilar to current prices, net of unforeseen events” while “in the second quarter, with the diversification” of gas supplies and with the launch of Arera’s president, Stefano Besegini, said on Sky TG24 , The new regasification plant, a “stable signal to cut” tariffs may arrive.

the climate
And he continued: “A certain meteorological situation and a decrease in industrial consumption” affect the formation of the price of “gas,” as Pisegini noted again, and they are two phenomena that “bring benefit but are symptoms of climatic and industrial malaise.” The effects of a particularly mild winter so far on methane prices. Arrera then called on us to “be very careful” because we are still “in the middle of winter” even if “things are going better than expected.” “Low consumption preserves all its value,” Pisegini added, referring to “the resources I have put in Government in an important way on the industrial side and on vulnerable consumers.” To address low-income families, the Arera President called on them to provide ISEE for 2023 as soon as possible, which is a sine qua non for automatic receipt of billing bonus.
However, the high prices are heavy on the pockets of Italians. According to Facile.it calculations, in 2022 a typical family in the protected market had to shell out more than 3,100 euros to pay for electricity and gas, an increase of 1,340 euros over the previous year (+76%).

READ  What you can no longer do