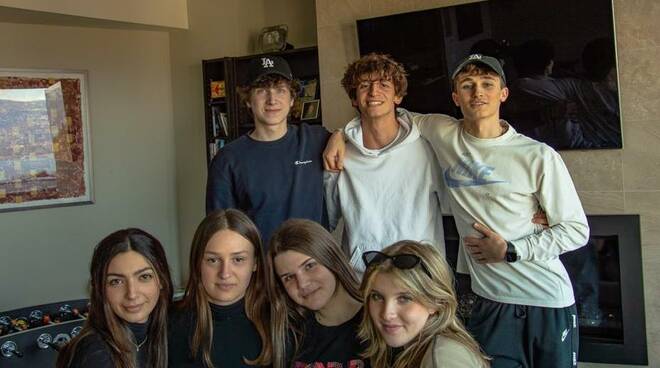 In our online newspaper – Every Monday – we welcome the initiative, which is sponsored by the Amici di Enzo Association and run by a group of students from Liceo Classico and Liceo Scientifico of Ravenna. Draft

My name is Martina and I am part of the Uppunto team. I have been living in British Columbia, Canada for the past seven months, where I am in my fourth year of high school. From September to today, many things have changed in my life. In the meantime, I must say that spending these months abroad is like putting an end to my frantic Italian custom. Although I live in Canada, the life of a 17-year-old girl between school, friends and family, I immediately felt as if I had been induced into a suspended and welcoming bubble.

As the weeks went by, in fact, I moved further and further away from my life in Italy and began to build one in Canada. After a year and a half marked by epidemics and consistent information about the dangers, ethics, rules and restrictions, I suddenly came out of a dive and finally felt like I was taking a deep breath. True sigh of relief. In fact, from the first days of school in September, I began to forget the gravity of the situation associated with the Govt-19 emergency because everyday life in Canada was so different. Not because of the lack of shared rules and protections, but because Canada has the same percentage of vaccinated people as Italy, and restrictions have been introduced on the use of transportation methods for those who have not been vaccinated here and in the working world. The canteen at the school was also removed and the use of masks was introduced.

But I found a very different approach: none of the professors’ experiments on masks and spaces, and none of those who brought in daily bulletins on the progress of the infection at home or with friends. The news about the number of cases in Canada was given to me by my family in Italy and it seemed to me that they were talking about another country. During the Christmas holidays, when the infections started again, my friends in Italy told me about the lines at the pharmacy to see each other safely and get swabs. At the same time, I and my host family had goiter symptoms, but it was not possible to find tampons throughout the district, and the only thing local health care told us was to stay home in self-monitoring. No contact isolations, no tampons, in short, for me and my Canadian family it was like a regular seasonal flu. Like I said before, I have lived a very quiet life these past months, and thanks to the large number of people who have been vaccinated in Canada, I have for some time forgotten that an epidemic is still going on.

However, how happy I was to live in this bubble, and what gave me the opportunity to spend my teenage life so quietly, I realized just how suffocating this bubble was when the war started in Ukraine a month ago. Until a few days before the start of the war, I was not fully aware of what was going on in Europe because no one here was talking about it. Only by comparing myself with relatives and friends from home did I realize the seriousness of the situation and begin to inform myself about what was going on.

My opinion on how this kind of topic is handled is certainly partial and limited because it refers to the few months one lived in a family and school and certainly could not be representative of the whole of Canada. However, I was very surprised at first to hear that even the professors were more interested in what was going on locally than what was happening in other parts of the world. In this case I had the feeling that this horrific attack on the Ukrainian people in Italy was being talked about at home, at school, among friends. My sister, along with all her schoolmates, was involved in collecting clothes, medicines, and food for the needy to be sent through the Orthodox Church of Ravenna.

Here in my Kelowna I felt the need to search for articles if I wanted to know more, otherwise I would have been completely in the dark. In fact, the Canadian school community is not closed, on the contrary! For example, he highly values ​​gender sensitivity and encourages students to express their opinions on any subject. Politics is not banned in high school either, and the September elections for prime minister are a definite example. At the same time as the national election campaign, the professors inspired us to get to know and discuss the topics proposed by various candidates and political parties. The school also set up a simulation of the ballot with ballot boxes and ballot papers. I found this experiment interesting and impressive. As students we began to learn what was going on politically in Canada. After this experience, I never expected that school to cope with a new war in a European country 80 years after the end of World War II.

I think it depends somewhat more on the practical community than on us and focuses on its own country. Thinking back now, I realize that all the history pages, tests, and questions I read from the third grade I conducted in Italy were not only useful for filling the ballot box on the report card. Living in a bubble may be easy and relaxing, but even today, more than a month after the outbreak of war, it is rare to hear about what is happening in Europe, making me wonder if it is right. The beauty of this experience abroad is that I believe in discovering different lifestyles and different cultures, that is not a fact and that the complex is tiring but it is always a source of enrichment. I am increasingly aware of what is currently happening in Ukraine and my experience in Canada, comparing one’s beyond city, region or state, getting to know each other and building a fraternal bond.