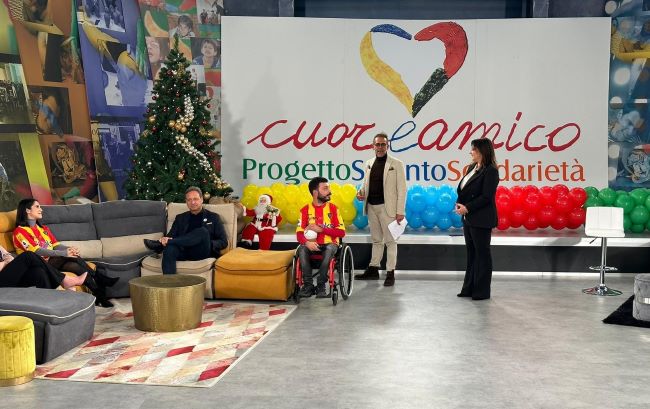 Epiphany is dedicated to solidarity with TeleRama in the TV marathon dedicated to the 22nd edition of the Salento Solidarity Heart Friend Project. For the first time, the event, which took place yesterday, Friday January 6, from 10 to 21, crossed the threshold of TV Salento overlooking Puglia and Basilicata.

Participation, testimonials, life stories, stories of problems and disabilities become normal thanks to the great commitment of the Salento non-profit organization that eagerly takes charge of cases and examines them, before standing shoulder to shoulder with families who often face difficulties. Limit.

From 10 to 20:30, conductors and artists took turns in the studio of the TV presenter’s production center, who, like every year, turned the long live broadcast into a moment of celebration and joy during which piggy banks were opened, discovered and measured, with transparency, the commitment of those who decided during the year to contribute In the great solidarity project.

On the sidelines of the evening, the President of the Cuore Amico Paolo Pagliaro, congratulating all the presenters and thanking the organizing machine of the association and all the benefactors and artists who attended, wanted to quote Pope Francis: “A donation makes us and others feel happy. “Today – he added – I breathed an air of normalcy in such a sad and difficult moment for the world; I saw the smiles of so many people, families and children who, despite the problems, teach us to look forward with a smile. And about that hope, which is renewed day by day, The Cuore Amico Project was born, and our sweetest creatures were born.” Finally, he concludes with the deeper concept associated with the plural: “giving rhymes with love.”

READ  Arrival of confirmation of knowledge

Among the guests, like every year, there is also the Unione Sportiva Lecce, who attend with President Saverio Sticchi Damiani and Technical District Director Pantaleo Corvino who wanted to make their concrete contribution to the special children of Salento.

Cuore Amico helps families, not only by donating cars that are equipped and comfortable for each trip, but also with economic contributions that help cover important expenses that are not guaranteed by the National Health Service.

In this version, €23,774.10 is collected from broken piggy banks in the studio during the live broadcast, which goes to replenish other donations. The children who helped in the 22nd edition are 7 cars and equipped with a donation 2 in addition to the 640 children from the past 21 editions and 174 cars previously delivered, important numbers, numbers of love, smiles of serenity on the wonderful faces of those. who faces great difficulties every day. All harvest, all funds are completely donated. And from today, we have already started again towards new goals on the board of the organizational system, with a colorful heart that is always moving.