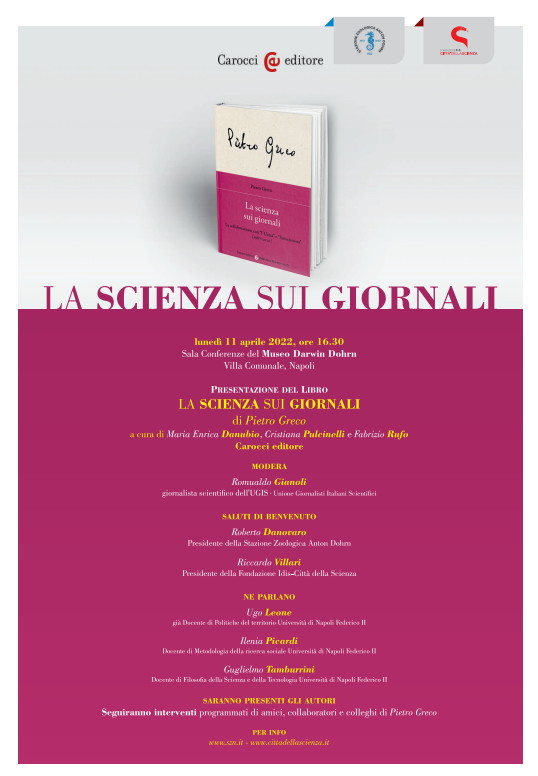 Books – “Science in the Newspapers” by Pietro Greco, exhibited at the Darwin Dorn Museum in Naples on Monday, April 11

Monday, April 11, 2022, at 4.30 pm, at the Darwin Dohrn Museum (Villa Comunale, Naples), the Idis-Città della Scienza Foundation, Anton Dohrn Animal Station and Carocci Publishing, organize the book presentation “Science in newspapers” for Petro Grecoedited by Maria Enrica DanubioAnd the Christiana Pulcinelli And the Fabrizio RuffoWho will be present at the initiative.

The Rio Climate Conference, The Frontiers of Physics, Dolly the Sheep, The Use of Pesticides, The Fate of the Universe, The Birth of Art, Fire of the City of Science: These are some of the topics that emerge from forty years of news from the world of research and from debates about the relationship between science and society that find life in the writings of the late Petro Greco. The volume includes a selection of more than 1,500 articles he signed since 1987, the year Greco left the laboratory to write for the pages of the newspaper “l’Unità”, with which cooperation continued until the newspaper’s closure in 2014.

“Science and research findings should be shared, understood and supported by all – hang up Roberto Danovaro, Head of the Anton Dohren Zoological Station– Pietro Greco devoted a large part of his life to this task. Because change can only be brought about in our society if we build greater awareness of the importance of research and the scientific method in solving problems. The work of Pietro Greco in this sense was fundamental, and, unfortunately, it does not seem to me that until now no one has been able to bridge the gap left by his death.”

“Pietro Greco was very important to Città della Scienza – I announced Riccardo Villari, President of the City of Science – but we like to remember him not only because of the close relationship he has with our institution, but also as one of the figures who has worked a lot – with many initiatives – to emphasize the importance of scientific, technological and innovative culture for the development of a country.”

The meeting will retrace Greco’s career, and above all his many relations with the city of Naples, through the testimonies of the many scholars, researchers and journalists who were fortunate to know him and collaborate with him.