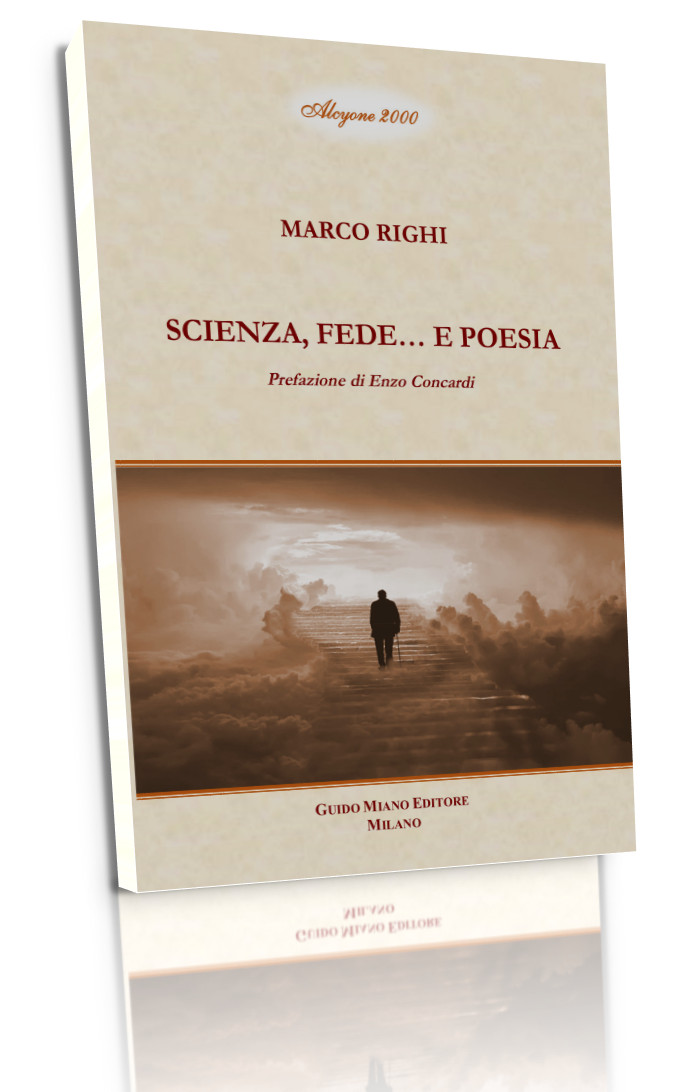 poetry book Marco Righi, science, faith … and poetry (Preface by Enzo Concardi, Guido Miano Edtor, Milan, 2021) into four parts: Faith, Science, Poetry, and Works of the Gospel. Of course, the author is concerned above all with the “message”, encapsulated in the forms of closed and ordered traditions, which he intends to convey through his verses. That is why the ego addresses itself insistently to the recipient, to the general “you”. The purpose is to convince and convince the eternal truths with the values ​​that the writer intends to convey. Yes, because the primary goal is communication, so the adopted language is mostly everyday language, albeit with an ancient patina. A poem, the poem by Marco Righi, who presses the pedal on the pragmatic reference function, as a word has the ambition to work on the reader.

The first part is titled to know (Marco Righi is a researcher and works at CNR), begins with the text rays in silencewhich seems to be a compliment to the tireless and passionate work of the scientist, who, in the following poem, robs the space of sleep, spurred by the fever of new discoveries, in search of the truth “which is often combined with beauty” (passion). The advantage of such constructs lies in the fact that scientific data often becomes an image, for example, it occurs in circular. For Reggie, science is not the same Torres Ebernia in which to withdraw, but a resource in the service of the people; And from “science contempt” (ivory tower) can be deceived and deceived, which are plotted against the gullible, the gullible and those who still believe “Witchcraft and the Evil Eye” (ibid.).

We also handle topical issues such as in Corona Virus, Where his arrows hit hybrid The arrogance of a person who thinks he is his master “creature”, Even if the various revolutions have diminished their role over time. One must realize that he is only one “Guest/Moreover not welcome” (ibid.) for those suffering from the repercussions of pollution. Thus, the environmental theme is also touched upon, which is developed in the later composition, and which presents us with a dystopian representation, in which the negative situations of the times to come are visualized, with the apocalyptic perspective that “Night.. lasts forever.” On sunsetThis is the title of the poem in question, Enzo Concardi dwells in his sharp introduction, and talks about “The harbinger of the decline of our species.”

The second section of the collection is devoted to faith. Issues that have already appeared before are back. Overcoming belonging, this time by virtue of faith; the presence of the Other who is naturally understood as God; The enthusiasm that kindled faith here, as it had previously accompanied and favored the discoveries of the man of science. Here the poem is made in some cases choral, taking on sacred hymn movements, as in great destinies, where the subject is really “we,” and there are interesting notes like the one in the last third verse, which shows that spiritual good, as opposed to material, if shared increases rather than decreases, and where the importance of everyday little things, where “Hidden in the little things / That’s what we seek”; So it is also important “An unexpected gift for someone, / Comfort for a baby-skinned, / Smiling for those who are going through the boredom of life.”

at My gaze wanders There is a call to attention, and it is usually rejected to the end because of the selfishness of the rich, and in any case from the people who all take part in the daily struggle for Life, struggle for life He was talking about Darwin. Here the tone becomes bleak in prediction, almost menacing, and the end for which for all is one: “Till death and ruin / Will not be.” But the poem ends with a reassuring supplication to the Virgin, establishing the pure heart/happiness equation. The consolation of certainty in doing the right things, and owning “put to use” Gifts received, lighten the true final balance of life future. Section Faith closes with mass; As if he says that poetry is his way of prayer.

And she really is Poetry Title of the third part in which Reggie was confirmed straight cantor: We commend the moral health and joy that knows how to give awareness of the duty performed. Here too the cherished themes of wisdom return to his contemplation (the value of human life which he denies “smugglers” (meteor), the joys of family and motherhood, the importance of mutual aid and “spending” (obstetrics) to the other how paths work which, unlike simple ones “tourists”, ‘They are consumed with help’ (Tracks); On the other hand, there is a lack of purely metabolite constructs, with the exception of the init Homepage. Pages dedicated to Bible worksAnd the which contain, as the initiator aptly notes, A lyrical reconstruction of episodes from the New Testament in which the author entrusts the story—in current, sober, and humble language—of what he saw to a present person.