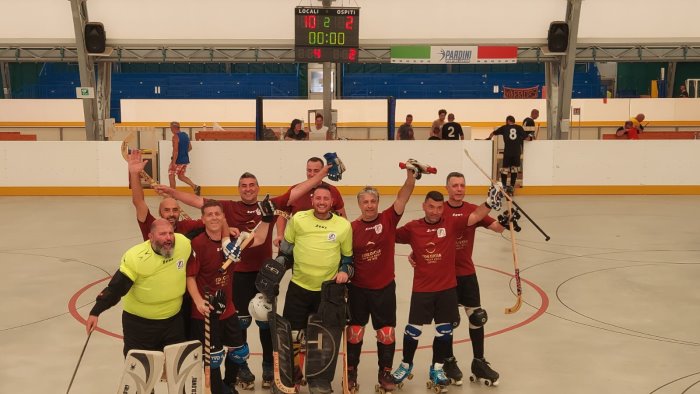 Saturday and Sunday rendezvous in Novara, on the rink are the many glories of Hockey Old Town

There are people like Baldy who shut down their skate shoes 25 years ago. But it’s as if time has never passed for the Salerno Veteran Hockey Team, the Salerno team that will face the National Finals of the Amateur/Veteran rink hockey tournament on Saturday and Sunday in Novara. The Salerno team, after qualifying first, arrives in the group with equal points with Follonica, but only in second place on goal difference. Salerno led several players to the top scorers, including Esposito (11 goals) and Persia (10 goals).

Salerno Veterrani hockey will play on Saturday 2 July at 12 o’clock against Pordenone and at 19 o’clock against Bassano. On Sunday, from 10 to 18, the various finals will be held. “Feelings are good – explain the members of the Salerno group – met a group of friends who lived together many sports seasons and many championships. The boys first then the guys who wore the Roller Salerno jersey, the hockey club first and then Salernitana Hockey after that. It all started with a crazy idea for Daniel Esposito and Giovanni Mottoni. But one message was enough to convince everyone.” The Salerno team will consist of Liampo, Marazzo, Santimon, Henriquez, Persia, Baldi, Massaro, Esposito and Motoni. “The spirit is just right, lots of fun, lots of laughs on and off the track. But with a dream in the stairs. But we will talk about that on Sunday after 6 pm.”