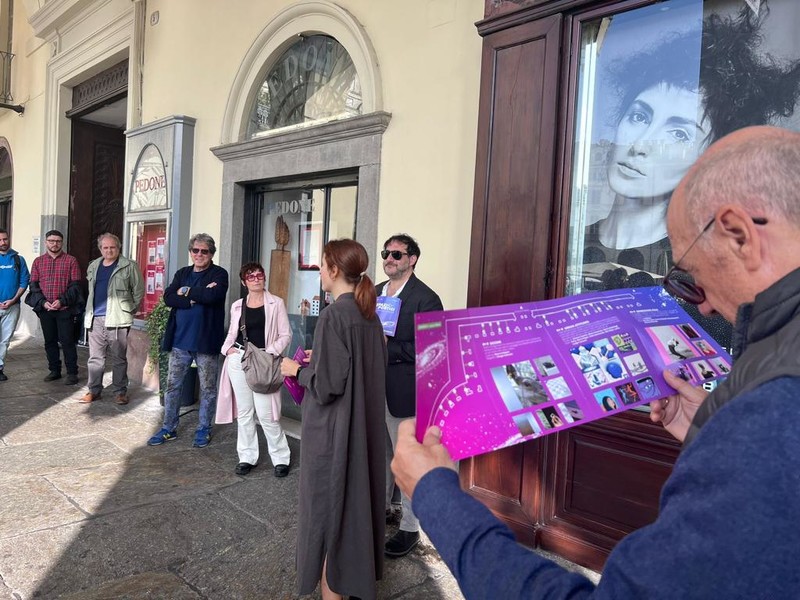 Episode IV of Spazio Portici – Creative Paths. The project that showcases the art of young authors along 12 kilometers of galleries. In the past, temporary installations were invaded via Po, via Nizza and corso San Martino. For this version, versions running along Piazza Vittorio Veneto were chosen. A true itinerant art path that helps give new life to arches, included in the contemporary Turin Piemonte calendar.

Episode 4 was created by Fondazione Contrada Torino Onlus in partnership with GAI – Association for the Circuit of Young Italian Artists with a contribution from the City of Turin and in collaboration with Torino Creativa.

The open call was launched in April and is aimed at curators, artists and artists under the age of 35 active throughout Italy in the visual arts, graphics, design and photography.

The three proposals of the professional section considered the most deserving are presented in an exhibition under the corridors of Piazza Vittorio Veneto, north side.

“Thanks to this initiative, the arcades of our city have become open-air museums, giving young artists the opportunity to show their talent and set out on their own path,” comments Chancellor Carlotta Salerno.

“The future commitment will be to make the products already available touring – adds Germano Tagliaski, Director of the Contrada Torino Onles Foundation – perhaps he imagines moving also into the corridors of our suburbs, and continuing to produce new formats, always with special attention to the petition of young people and schools.”

“Siccome” is a project by Giorgio Andreoni that proposes, through reality and imagination, a visual and conceptual path, which becomes a key to opening a passage towards the premise, promoting the extraordinary use of urban space. Instead, “Urban Trends” is the signature of a group of artists: ehy, Maria Nagni, Viola Gesmundo, Kiki Skipi, Lume, Piazza Comune. Together they lead the viewer to think about the different dimensions of urban art such as the social aspect, the historicity of the movement, the contemporary, and the union of tradition and innovation. It also wishes to raise awareness about the role of the female figure in street art and urban art. Finally, “Generazione Italia” by another group composed of Marcelo Koslovy, Karim El Maktavi, Alyssa Martinova, Marzio Emilio Villa. Dedicated to the senses of multiple, overlapping and simultaneous identities, set among complex systems of belonging, to tell the reality of new generations in Italy.

In the coming months, educational workshops on urban art will be held at the Piedmont institutes selected for the pedagogical department, with the subsequent public presentation of the results.