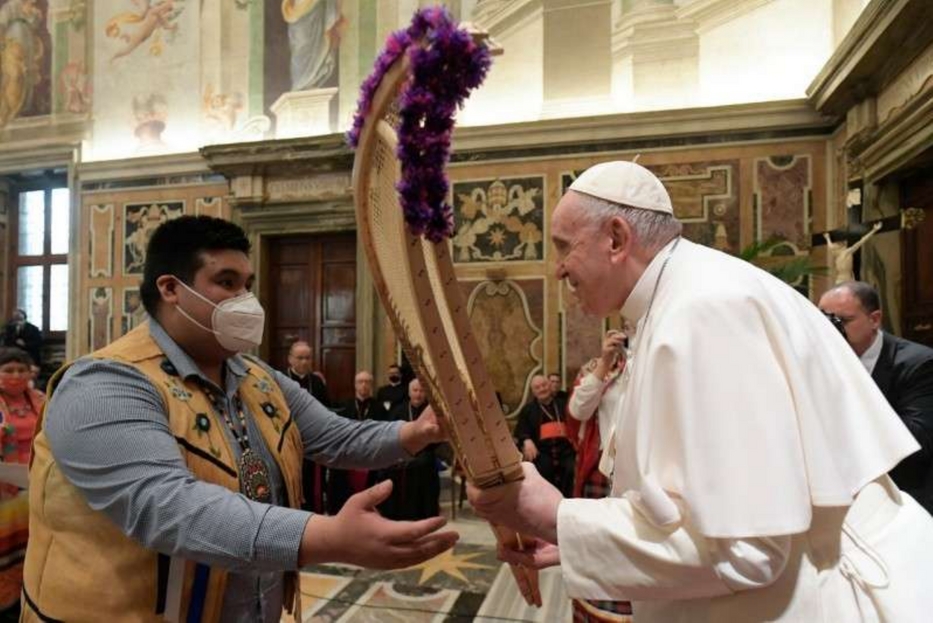 It was the expected day of the final meeting between the Holy Father and the representatives of the indigenous people of Canada. Representatives of Canadian Catholic bishops include “adults”, “intellectuals”, “survivors” and young Canadians. 32 delegates representing First Countries, Medis and Inuit. Arriving in Rome on March 28, they were personally welcomed by the Holy Father in recent days. At these meetings, delegates were able to present their expectations and demands to the pope, and some of the survivors of the “residential schools” were able to tell their stories.

Today, the final audience with all took place in Sala Clementina, 17 delegates from the Metis; With 6 delegates from the Canadian Bishops’ Conference, chaired by Monsignor Raymond Poison, President of the Bishops of 15 Inuit and 30 First Nations. In recent days, delegates have presented a pair to the Pope Moccasins symbolize the desire to walk together on the long path of “healing, reconciliation and truth”.

At the center of personal discourse is the theatrical story “Residential schools” established in the past to destroy the culture, identity, spirituality and language of the indigenous people.. From about 150,000 countries, Medis and Inuit children were taken away from their families and forced to attend one of these 139 schools across the country. It is estimated that at least 4,000 of these children and adolescents died as a result of disease, hunger, cold and abuse. This page of Canadian history emerged in all its tragedies last year, and on many occasions and at different points, around these schools, unfortunately, anonymous graves with the remains of these children’s bodies were found. Yesterday, President Rosenne Casimir, one of the first delegates, met with a private audience and asked Pope Francis to access the records and documents in the possession of the Catholic Church to identify the missing. Children.

READ  "Insina? Going to Canada is the last affection of the fans"

This morning Sala Clementina was filled with drums, violin music, songs and the typical dances of their people. Each of the three delegates presented a cultural and ceremonial expression to Pope Francis; David Cercock performed an Inuit drum show, an Inuit drummer used to celebrate special events such as the first hunt for a boy or the birth of a child. Alexander John Lamorieux and Bryana Marie Lisotte of the Metis performed the violin, a much-loved instrument by the Medis who began to play Scottish, Irish and French melodies in keeping with their ancestral culture. Finally, the traditional dance of the first countries took place. The trial ended with the exchange of gifts. Pope Francis presented each delegation with a bronze olive branch as a “symbol of peace and harmony.”

The audience opened with each community praying for a moment in their respective mother tongues. Elder Fred Kelly, Elder of the First Nations, prayed that all children who had been taken from their families and disappeared anonymously in the graves would “return to their loved ones and their parents and relatives to seek peace and comfort.” Emily Janvier, M மூத்தtis Nation’s senior, one of the survivors of the boarding school, sat on the podium. “We pray for those who are fighting for the damage they have suffered in our communities. So they are gaining strength in this path of reconciliation. Inuit delegates finally sang the “Our Father” prayer in the Inuktitu language.

Then it was Monsignor Poisson’s way: “Holy Father, our recent history is marked by the humiliation of mistakes and failures in loving our neighbor, especially members of those nations who have been in Canada for centuries. Our desire for reconciliation is immense and our presence here is a testament to our commitment. Holy Father, the people of America – the first nations, the Medes and the Inuit, the people of European descent and many others – we have come to you – to learn from you what is most dear to God in our journey. Together, compromise. Holy Father, your warm welcome as pastor of the universal Church is very important to all Canadians on this journey of reconciliation. His words, full of pleas for mercy and calls for God’s tenderness, encourage us in the work of reconciliation ”.

Mr Poisson recalled that Pope Francis had said he was ready to accept an invitation from North American bishops to visit Canada.

Finally, the long-awaited moment, in the Pope’s words: “I apologize to God” for what Catholics have done to Native American people and their children in Canadian boarding schools. Pontiff expressed “anger and shame” at the role played by various Catholics in “everything that hurt you.”

Perkoglio pointed to the continuing idea of ​​”an ideological colonialism” driven by “programs studied at the table” and “greed and the desire for profit.” “A colonial mentality is still prevalent today,” he added. What sometimes happens in residential schools where the children of the natives are forcibly relocated is “thrilling” to be treated inhumanely and to always snatch away their cultural identity.

When you look at how attempts have been made to “inflict feelings of inferiority” on those children, “unresolved traumas that often turn into intergenerational traumas” occur.

“I join the Canadian bishops in asking for your forgiveness,” the pope continued, “and we see the Spirit of the Lord with the humility of the Church and with humility.” The reasons, the latter, were that he had words of thanks to the Canadian bishops for the “courage of humility” they showed in resolving the question, which erupted when the remains of dozens and dozens of boys buried anonymously were found. They are meters from educational institutions that were actually locked. 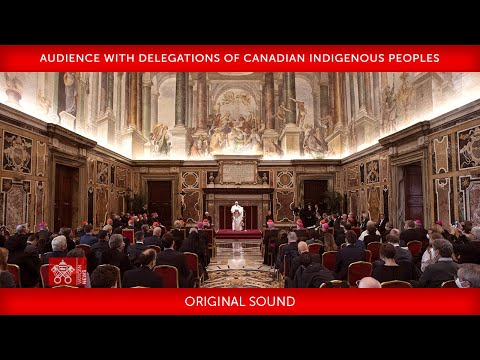 The pope also seemed to announce his visit to Canada at the end of July: he recalled that the popular devotion of the Native people was especially sent to St. Anne, who is celebrated on the 26th of that month. “I want to be with you in those days,” he said, recalling that reconciliation “requires concrete actions in the spirit of brotherhood and an open search for truth.”

This leads to a “revival of your culture,” he repeated, “I want to tell you that the Church is on your side and that it goes with you.” That is why Bergoglio calls it “the blessing of the Creator upon you” because “your language, your culture and your traditions belong to all mankind”. “Even if your tree suffers a tragedy and is uprooted: it has been broken by a colonial, and its purpose is to transform you into another identity”. As a result “many families are divided and many children are affected by colonial activity”. For this, Pope Francis, who felt anger, pain, and humiliation, asked God for forgiveness and forgiveness from the victims.