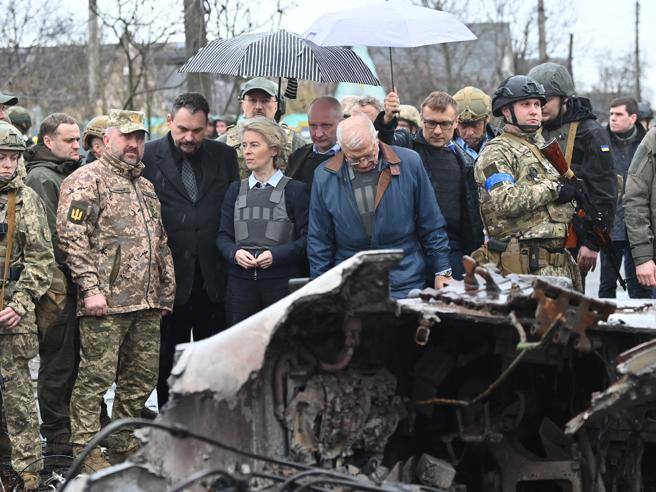 from our mail
KYIV – The train journey from Poland to Kyiv is long and slow, from a country at war at the gates and from a country at war. At the Rzeszow airport, anti-aircraft guns are deployed not far from where civilian flights land. Meeting point with the European Commission team to accompany the President Ursula von der Leyen on her trip to Kyiv It’s a hotel not far from the airport, full of NATO Americans. With her is also the High Representative for Foreign Affairs Josep Borrell.

Departs at midnight and past half past from Przymysl railway station, which has been welcoming Ukrainian refugees in recent weeks, accompanied by the Polish army to the train. The security measures are very high and the demand is to keep the smartphone in a special case that protects its location once you cross the border. Slovak Prime Minister Eduard Heeger and a delegation of European Parliament members are also traveling on the same train. After 12 and a half hours of traveling, the expedition reached Kyiv station at about 2 pm local time, sandbags and armed soldiers waiting for us. The helmets they deliver are new, made in Romania, and even the flak jacket still smells of plastic. It may be part of the supplies that member states have supplied to Ukraine for weeks, with protective equipment but also weapons. Before his arrival, the president explained to a small group of journalists who were with her on the train, including Corriere della Sera, the meaning of the trip: “We want to give our strong support to the Ukrainians and give them hope.” “Our message – adds Borrell – is that Ukraine controls its territory, its infrastructure, and you can travel.”

The president seems tired, for 48 hours she passed through Strasbourg, Sofia, Stockholm and then arrived in Kyiv. But it is determined to give a strong signal to the Ukrainians. That reference is in the volume yellow and blue – the national colours – entitled ‘Questionnaire’ which von der Leyen proudly shows us: it is the document prepared in a matter of weeks by the Commission’s technicians, who ‘worked day and night. ». This is the document that Kyiv must respond to in order to assist the executive community in formulating an opinion that will be submitted to the Council for membership application. And the president knows that in this process “the important thing is our tone of mind, we are working closely with the Ukrainians.” Von der Leyen emphasizes that the country is “in dire need of help”, which states that “Ukrainians are part of the European family” and will repeat this afterwards during the press conference with President Zelensky. “Ukraine should come out of the war as a democracy – he continues -. Together with other international donors we are ready to rebuild and reform the country. Now everything is worrying but there are also huge opportunities because the country will start from scratch.”

First stop to visit in Bucha: Here the unimaginable happened. We have seen the ruthless face of Putin’s army, the recklessness and coldness with which they have occupied this city. Here in Bucha we saw our humanity destroyedsaid the president, who was accompanied by Ukrainian Prime Minister Denis Shmyal. In front of them are the black bags with some of the bodies that were exhumed from the graves of the investigation opened by Kyiv, to which the European Union also contributes, the commission of war crimes. Von der Leyen and Borrell attended a short ceremony at St. Andrew’s and All Saints’ Church, where they lit a candle for civilians brutally murdered by the Russians in their sanctuary.

Along the way, reality partly overlaps with images that have traveled around the world, destroyed cars, or homes that have been engulfed in flames or discovered by explosions. Under the Bucha rain, von der Leyen’s blue eyes looked gray, and in his eyes the horror of what he knew and what they told her had happened. Then the convoy moved to Vokzalna Street, where the corpses of the burnt tracks blocking the road are still visible. Von der Leyen and Borrell listen. And they make promises. “You fight for our values,” von del Leine repeats. The task is long, punctuated by meetings and meetings, only the darkness of the curfew brings its end.