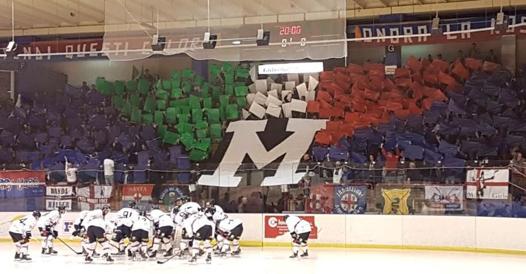 The Milan Bears hockey club, the only team to represent the city at the Winter Olympics, is in danger of disappearing. Fundraising by fans is not enough, a last call to organizations. At PalaItalia in Santa Giulia, ice hockey matches in the 2026 . Games

stature, but noisy. Anyone who’s watched at least one ice hockey game in Milan knows what we’re talking about. a Bombonera in Palagor to propel a team that has over the years limped into survival. Very high and low. Banished to foreign leagues. bankruptcies. There is one thing that has never changed: cheering. The latest figures refer to 1,500 people who participated in the last matches of the Italian League. Here we are, ironically, slippery but heavy as some hockey balls only when they pounce on you.

Because there are only a few days left. Fundamentalists will point out that the last team to wear Rossoblo’s jersey is the heir to numerous mergers, changes, bankruptcies and change of ownership. The sum is equal to 25 Scudetti, 5 Italian cups, 3 Supercup cups, 2 Spengler cupsa Champions Cup final, a Continental Cup, a Serie A2 Championship, two second-tier championships, because surprisingly, in Milan he was always cheering for the same thing. Those at risk of fusion now. And not a metaphor. In the Olympic year.

Appeal to the municipality and district

The club warns that the Milan Bears Hockey Club, the only team to represent the city in a winter sport, is in danger of disappearing. deep economic crisis. Nor can Curva’s efforts provide the oxygen needed to skate the accounts: unfortunately – as President Pompeo Guarnieri says – the tireless commitment of the masses has not been enough to avoid backsliding. In the past three years, they even organized fundraising and finally tried the path of popular ownership of shares. A cry for help rises from the Agora in Via Piranese towards the district and the municipality: The masses have taken steps to confront the mayor and the governor. Objectives: A commission to protect AC Milan (formerly Ambrogino d’Oro) and a four-year relaunch project that could bring city hockey to the Winter Games.