The James Webb Space Telescope (JWST)It is the largest and most powerful space telescope ever made, and it recently spotted Jupiter in minute detail showing the massive storms and massive aurora borealis produced in its atmosphere. The two images released by NASA – which operates the telescope in collaboration with the European Space Agency (ESA) and Canada (CSA) – were obtained using the Near Infrared Camera (NIRCam) instrument. As the name suggests, its sensors are sensitive to infrared radiation, which is the part of electromagnetic radiation that we can’t see because its frequency is lower than that of visible light.

In addition to being especially stunning when viewed, these images will help astronomers deepen their knowledge of the largest planet in our solar system.

Infrared observation allows us to understand details that we will not be able to see and which will be very useful for studying the properties of space objects. The images are then processed to be visible to our eyes, using colors that make it possible to highlight certain characteristics.

The image of Jupiter that you see below was It was received Compilation of various snapshots of the planet taken by JWST. At the poles of the planet, the aurora borealis appear, the color of which ranges from green to red, which reach high altitudes in the atmosphere of the planet. The Great Red Spot, the storm that has lasted for at least three centuries and is the largest in the entire solar system, is so large that it can contain roughly three Earth-sized planets.

In the image, the spot appears white because, like other clouds in the Jovian atmosphere, it reflects large amounts of sunlight, and thus appears very bright in the filters used to observe the planet in infrared light.

In the second image, several other details about what is near Jupiter are shown. For example, the faint rings of the planet can be observed, which are less visible than those of Saturn and with a pronounced brightness up to a million times lower than the average atmosphere of Jupiter. At a greater distance we can observe Adrastea and Amalthea, the two small moons of Jupiter. It is possible that the dark spots of light in the background are other galaxies that have infiltrated the image due to their great brightness. 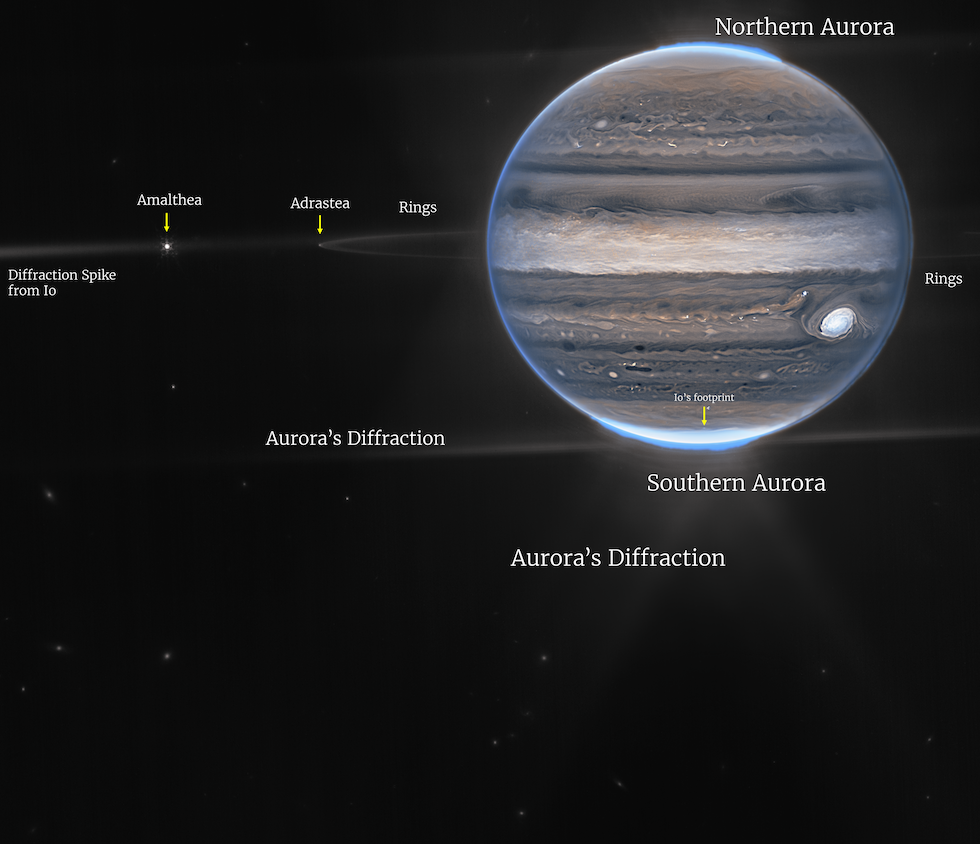 The two images provide in great detail new perspectives on one of the most studied planets in our solar system. Jupiter It is the largest and most massive celestial body in our neighborhood: we would need 11 planets like ours to cover its diameter, and 300 would be required to have a mass equal to its own.

Unlike Earth, Jupiter isn’t rocky: it’s a giant ball of gas composed mostly of hydrogen and helium. Because of its size, astronomers believe it was the first planet to form in the Solar System, when it incorporated the remains of gases that make up the Sun. Jupiter takes 12 years to complete a complete circle around the sun and rotates very quickly on itself.: a day on its part lasts only 10 hours.

READ  Xiaomi, with this WiFi extender offered at half the price, you can surf the Internet very fast

It was launched on December 25, 2021In the spring, JWST reached its observation point 1.5 million km from Earth, starting at to observe The universe with its powerful instruments that allow it to capture light emitted from very distant sources, billions of light years away from us. The telescope sends data on the brightness and light captured by its instruments to the Space Telescope Science Institute (STScI), which does an initial processing by providing files that astronomers can then use for their studies.

A space object can be observed in the infrared using various filters, which are calibrated to capture a specific wavelength. so you can to score Each filter is equivalent to the cutoff that our eyes can see. What has the longest infrared wavelength can be translated to red, for example, while what has the shortest infrared wavelength is translated to blue. In this way, we can take radiation from a part of the spectrum that our eyes cannot see and move it to the part that is visible to us. In a manner similar to raising or lowering the tone of a song.

STScI research groups publish images processed in this way mainly for communication purposes, but astronomers and simple enthusiasts are free to make their own details, choosing for example to highlight some characteristics over others, for research purposes or purely aesthetic taste according to the circumstances. and needs.