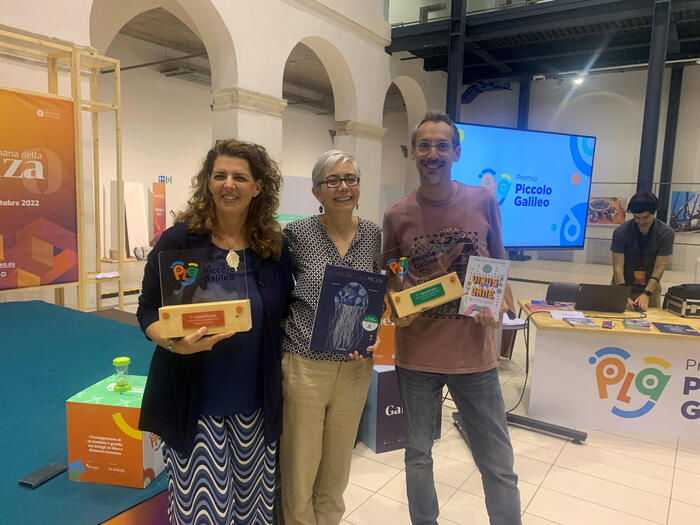 They are “Il Giardino delle Meduse”, by Paola Vitale and Rossana Bossù (Junior Category) CameloZampa Edition, and “Virus Game”, by Antonella Viola and Federico Taddia (Young Category) Mondadori Edition, Piccolo Galileo Prize winning books for a scientific publication . The award ceremony was held in Padua as part of the Science Week designed, coordinated by Playadi and promoted by the Municipality of Padua. Internet. The award, which is divided into two categories, Junior for readers between 5/10 and youth for readers between 11/16 years old, is part of the Galileo Literary Prize for Scientific Publishing, a prize for seniors that has now arrived. Sixteenth edition. The winning books reached the final along with two other book finalists for each category, selected from among the 54 award nominees by a scientific jury of 4 juries. The road to determining the winner in the Junior and Youth category saw the participation of a jury of 10 kids and 10 boys/girls who received the final books as summer reading and then decided their final rank. Their vote, along with the vote of the scientific jury and the vote of the children and youth present in the hall at the closing ceremony, allowed the announcement of the absolute winner.

“Jellyfish Garden” is an immersion in the world of jellyfish, to discover all about these strange creatures and to understand why studying them is important for our future. The Virus Game is a fun book to understand how our bodies work and protect themselves.

“It is with great pleasure that authors and publishing houses have believed in the Piccolo Galileo Prize for young readers. It is a positive sign for both the world of publishing and culture because bringing young people closer to science is an essential component,” said Andrea Colacio, Counselor for Culture in the Municipality of Padua. “Il Piccolo Galileo wants to reward this world, not only authors, but also illustrators: publishing for children is a union of texts and images,” concluded Alessio Scaporo, Pleiadi Scientific President and Piccolo Galileo Prize.