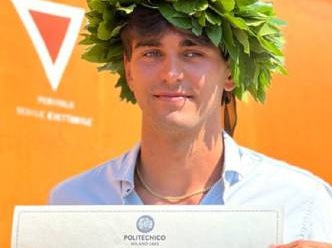 “Passion can give an initial boost, but to achieve a goal, you need dedication and a willingness to work.”

He holds 110 distinctions in aerospace engineering

Passion and dedication. These are the bars that let the 21-year-old Cantorino go Jacobo Massocco To reach the goal he set for himself: a degree with honors in Aeronautical Engineering. 110 complete, with a medal of commendation, at the end of the three-year undergraduate course he performed at the Milan Polytechnic.

“Choosing to go into aeronautical engineering was a bet to fulfill a dream,” says the young man from Kantouri, “since I was a child I had always loved numbers and mathematics. The decision to do engineering was taken some time ago, but after passing the Polytechnic access exam in the fourth year, I had the opportunity To enroll in the college I preferred, so I decided to aim high.”

Toward the sky is, in fact, space.

“It was a very difficult path, but in hindsight it was the right choice for me, that I decided to continue on this path – explains Masco – I already enrolled in a master’s degree in aerospace engineering because I would like to become a propulsion engineer, or the person who designs systems launch, even if I knew that if everything went as planned, I would have to leave Italy to do the job in spite of myself.”

It is no coincidence that for his two senior projects, he created a project aimed at defining the best possible orbital transition between two points in space and a second redesign of the launch system that will bring the Perseverance rover to Mars in 2021.

“The result was a work of about 100 pages that I really enjoyed doing as a conclusion to my three-year course,” explained the student from Kanto, who is preparing to return to class in September.

“It was three very intense years, between the pandemic and the lockdown,” Masaoko recalls, “but I decided to take advantage of that period when nothing else could be done to devote myself entirely to studying. Especially during the first lockdown, I devoted 95% of my time to lessons and studying.”

The sacrifices that nevertheless allowed him to be able to pursue his dream and that may allow him to make history in the near future.

“If I think about the past, what moment would I like to live in? Surely July 20, 1969 when Neil Armstrong He landed on the moon, because it was a moment that changed the course of history, – concludes Alcantorino. – In my little way, seeing the arrival of Perseverance live on Mars was wonderful.