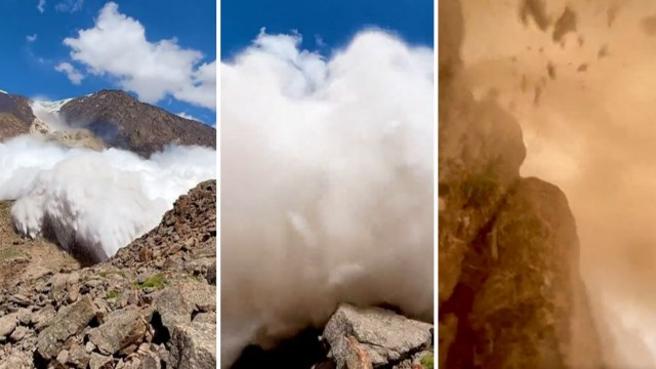 The man posted the video on social media: “It got dark and I thought I was going to die.”

A stunning avalanche in Kyrgyzstan, Friday 8 July. Nine Britons and an American risked drowning: they narrowly escaped. A man, taking part in a guided tour to the Djoku Pass, one of the most beautiful areas of the Issyk-Kul region in the Tian Shan Mountains, photographed the snowfall. He heard the sound of ice cracking and started recording, he probably didn’t imagine that an avalanche would reach him. The risk he took was enormous, although he made sure there was a place behind the rocks nearby to take shelter in. A cloud of ice and snow passed over him with devastating force. Later he said, “It got dark, it was hard to breathe: I thought I might die.” The rest of the group was farther away: everything was safe, only one participant was hit in the knee.
The Department of Ecology and Tourism of Kyrgyzstan State University explained that the avalanche is a consequence of climate change: the glacier has melted due to rising temperatures and part of it has collapsed. A study published May 27 in Geophysical Research Letters found that temperatures have risen across Central Asia over the past 35 years, which includes parts of China, Uzbekistan and Kyrgyzstan. In some regions, the average annual temperature was at least 5 °C higher between 1990 and 2020 than it was between 1960 and 1979. In the Tian Shan range, the rise in temperatures was accompanied by an increase. The amount of precipitation that falls in the form of rain, not snow. Higher temperatures and increased precipitation contribute to the melting of ice at higher altitudes.