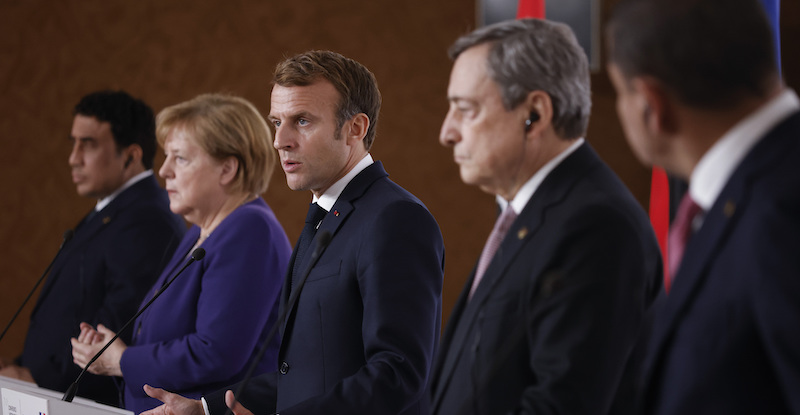 A new international conference on Libya was held in Paris on Friday, organized by the United Nations, Germany, Italy and France with the aim of ensuring the survival of the new institutional structure that emerged after the end of fighting between rival militias. over there conspiracy One of its main goals was to ensure the holding of the next elections and the implementation of the withdrawal of foreign mercenaries still present in the country, sent by Russia and Turkey: the Libyan authorities committed themselves to holding the elections on December 24, albeit with some bewilderment and amid many doubts about the fact that there would actually be, while On the issue of mercenaries, it appears that no major steps have been taken.

in a document At the conclusion of the conference, the leaders present expressed their “full support for the full implementation of the ceasefire on October 23, 2020” with the aim of stabilizing the country politically. In February, the formation of Libya’s new interim government ended the presence of two different governments – one in the west, based in Tripoli, and the other in the east, in the Cyrenaica region – who had been fighting each other for years in a civil war that only ended after the militias led by Field Marshal Khalifa were effectively defeated. Haftar is an ally of the eastern government.

The new interim government is composed of the Presidential Council consisting of President Muhammad al-Minfi and his two deputies, and the Government of National Unity headed by Prime Minister Abdel Hamid Dabaiba. However, both sides of the government have not resolved the major divisions in local politics, and have been at the center of various tensions in recent times.

READ  The G20, Final Document Diluted with Differences: Small Steps on Issues and Deadlines Compared to Paris. Leaders pursue the changes they must prevent

The President and Prime Minister also took different positions regarding the commitment shown to hold parliamentary and presidential elections on December 24: during the Paris conference, the exile explicitly committed himself to respecting this date, while Dabaiba who according to some rumors. He could run for president, but he has not explicitly done so, saying instead that it is up to the Electoral Commission to decide when to hold it.

It is therefore difficult to understand whether the elections can be held in a safe, free and transparent manner, and whether they will actually take place on December 24. Because the date of December 24 is very close, and then because, as Draghi said, the interim government will have to agree on an electoral law “fundamental” for the process, “with the consent of all” and “not in the coming weeks, but in the coming days.”

according toanalysis PoliticoFrance, Germany and Italy, despite some disagreements, seemed more united than at previous conferences on Libya. The leaders present also gave “full support” to the action plan for the withdrawal of foreign mercenary forces, but as Merkel admitted at a press conference on this aspect, “there is still a lot to do.”

In Libya, there are still thousands of Turkish soldiers or pro-Turkish Syrian militias conscripted in northern Syria, who went to fight on the side of the Tripoli government. There is also a file Mercenaries of the Russian Wagner Group, who was instead sent from Russia to fight on the side of Haftar. Turkey, which supported the Tripoli government in the war and its military intervention You changed the course of the conflictIn fact, he acknowledges the defeat of Haftar’s militias, but he did not participate in the conference, and as stated in the Apostille document in the document “reservations about the status of foreign forces.” Russia participated, but not with President Vladimir Putin.

Tariq al-Majrisi, an expert on Libyan affairs and a collaborator at the European Council on Foreign Relations, told A Politico“This conference showed that European influence is waning,” because it failed to engage Russia and Turkey. Mejrissi also spoke of the “risky conclusions” of the Paris conference.