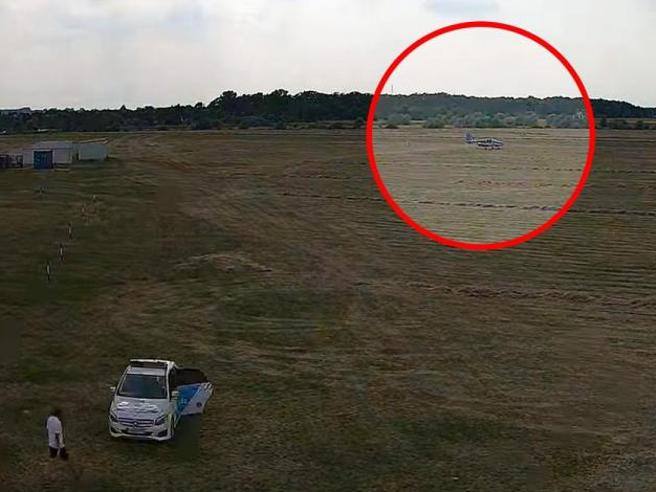 Piper, sold in Lithuania to three “Russian-speaking” customers, flew over the East without permission with the transponder turned off. The plane landed in Bulgaria, and its passengers fled

A small twin-engine plane flew over half of Eastern Europe with two “Russian speaking” people on board, without any permission, with the transponder turned off and fleeing from military planes, even American planes. The two passengers also managed to threaten the owner of a small runway in Hungary to refuel and leave and abandon Piper in the Bulgarian countryside and disappear who knows where and who knows what to do.

The story still contains many ambiguities and involves many Secret Service agencies. Not only is the identity of the “Russian-speaking” unknown – for now – but the exact route of the aircraft, the six-seater Piper PA-23-250-Aztec, made a stop for some time in Lithuania and its owner couldn’t wait to get rid of it. We only know that the twin engine crossed the skies of Lithuania, Poland, Slovakia, Hungary, Romania, Serbia and Bulgaria for a few hours, flying at a low altitude and trying in vain to go unnoticed.

It all started at the end of May when Pronius Zarumskis, director of the small Lithuanian airport of Nida, was contacted by someone interested in purchasing his small aircraft, the Piper, registered in Ly-Loo, for sale several years ago and also unused. “Three people arrived, inspected the plane and decided to buy it,” Zarumskis told local Lrt TV. He says that the three could not be identified because they dealt through a shell company and because he was not interested in their names.

“I don’t know where they came from. Maybe they were Ukrainians, Romanian or Bulgarians. I spoke to them in Russian,” he recalls. “They were definitely not Lithuanians.” The sale was supposed to take place in Panevezys, in the Lithuanian hinterland. While Nida Airport – something that has not escaped intelligence – is located a few minutes’ drive from the border with Kaliningrad, Russia’s backwater of Europe. “I’ve been trying to sell the plane for years, and I didn’t have a place to keep it – continues Zarumskis – so I’m glad someone bought it.”

On June 8, two of the three unidentified men entered the Piper, started the engines and left. Oro navigacija, the company that operates air traffic in Lithuania, confirms take-off that day from the national territory, but does not know where. Certainly not from the three major airports (Vilnius, Kaunas, Palanga), which is why the hypothesis is that the plane may have departed from the Panevezys runway. Sure enough, the two passengers did not provide any flight plans, did not have permission to move and never contacted the Lithuanian air traffic controllers.

Here is the first major hole in the reconstruction. The Piper flies invisible – not even from the anti-intrusion systems that have also been installed in recent months in the east – until it appears in Slovakia from where it enters Hungarian airspace just before lunch. The two land at Hidozzoboszlo Regional Airport, without permission: here they threaten a staff member who calls the police. When the police arrive, the plane takes off around 5:30 pm (Italian time).

READ  She rescued two young girls from kidnapping. The ghoul pretended to be the father

At this point, two Hungarian fighters at 5.38 pm intercepted the Piper, attempted communication (unsuccessfully) and even encrypted messages expected in a high-altitude emergency were not answered. The mysterious passengers keep pitching the transponder and flying low. At 5.48 pm (Italian time), the plane entered Romania from parts of Oradea, local media reported, where Hungarian fighters are still tracking it under an agreement between the two countries.

Ten minutes later, the F-16s of the US Armed Forces stationed at Feteşti appeared and then departed in pursuit of the Romanian F-16s around 6.42 pm. All this time there was absolutely no communication, and it is also unclear why military aircraft did nothing else to escort the aircraft for landing. In any case, the Piper entered the airspace of Serbia for a few minutes and at 19.09 flew over Bulgaria where, however, Sofia did not send any aircraft because “at no time did the aircraft pose a threat to the civilian and military infrastructures of the country”. Bulgarian Defense Minister Dragomir Zakov He explains to reporters.Piper lands – but a few hours later – at Targovishte, near Pohovtsi, northeastern Bulgaria. There is no trace of the occupants.